We need to have a sober conversation about the Coalition’s recommendations for their supporters on how to vote. Labor, The Greens, trade unions and most of mainstream media (apologies for repeating myself) are outspoken on their opinion that the party they’ve labelled as ‘racist’ should be put last by their own opponents.

If anyone fails to see the self-serving agenda in this advice for classical liberals and conservatives from ‘progressive’ socialists, they are simply not looking. Firstly, if the Liberal-National Coalition fails to follow their advice, they get to virtue signal about the comfort given to ‘racists’. This may indeed be an effective argument for undecided voters who are incapable of recognising that to a leftist, anyone with any sincere questions about illegal immigration and sensible border policies is a ‘racist’. The label is more often than not a lie, but it still works on bleeding hearts with soft minds.

Secondly, if the Liberal-National Coalition does follow their advice and put One Nation last on their how-to-vote cards, the number of votes required for the Labor-Greens alliance to gain power over the nation is substantially less and will make victory almost certain for the former Secretary of the ACTU, Bill Shorten. For him, dictating where Scott Morrison must put One Nation is a no-lose scenario.

But let’s be objective about where independently thinking voters should put Labor and the Greens. These parties are ruthlessly pro-death of Australians, wanting completely free abortions without any effective restrictions across the nation. They’re intending to compel some states to change their laws, discarding the idea of federation with the baby; and to hold all states’ health funding to ransom if any public hospitals don’t follow this fatal fiat.

Putting feminarchy propaganda to one side, the object of the abortion debate is observably a living human with unique DNA like every other living human and empirically not a part of the woman’s body. To treat living humans as someone else’s disposable property like abortion advocates do is ethically indistinguishable from slavery, except the result is invariably fatal. 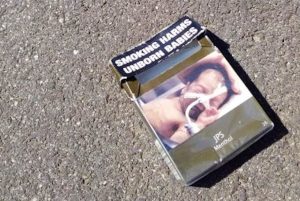 This photo is of a government-mandated health warning on a cigarette packet. It reads, “Smoking harms unborn babies”. This valid concern belies any argument that the object of abortion is not a living person with fundamental human rights. She is equally deserving of protection under the law from those who would do her harm either inadvertently or intentionally. The tragic irony is this rubbish was discarded carelessly just outside the exclusion zone around an abortion clinic where “unborn babies” are also discarded after termination.

Labor and the Greens have the gall to cry “racist!” while rationalising the intentional destruction of so many preborn living humans. They are consistently more concerned with ideology than the casualties of their policies; including victims of human trafficking drowned at sea and people in poverty dying of cold because they can’t afford electricity in Winter. They couldn’t care less about the desperately needed jobs sacrificed to horde natural resources or pricing the most vulnerable workers into long-term unemployment with the paternalistic ‘compassion’ of mandatory minimum wages.

I don’t think One Nation qualify as conservatives by any stretch of the imagination. They’re right of centre on some issues, left on others, and far right on more. Their petulant vandalism of the last Queensland election because they didn’t like the LNP’s preference recommendations delivered a hard left government out of spite, not sincerity. But we conservatives, classical liberals, libertarians, centrists, Christians, Muslims and other Australians right of Stalin have two groups to put last on our ballots: those accused of giving comfort to racists and bad ideas, and those promising to make killing preborn living humans completely free and easy.

The Labor Party of 2019 is a radically different proposition to what it was when Howard was PM. It made some sense back then to “put One Nation last”. Today, Labor is not the party of the worker, the battler, or a “fair go” at all. They ignore the real impacts of their neo-Marxist dogma on workers and the economy.

We all believe it’s nobody’s business what two consenting adults do in the privacy of their bedrooms, but Labor believes two consenting adults can’t even agree on working for low wages for a few years in exchange for valuable experience and training without the Labor Party’s imperialistic approval.

The Labor Party cannot win government without Green preferences and has consequently been taken captive by extreme Green ideology on immigration, environment and biology with real and immediate casualties in their wake. Objectively there is nowhere their extreme anti-human ideology is displayed more than in their radical taxpayer-funded abortion-without-limits campaign policy.

Prime Minister Scott Morrison should hold his fire until nominations are closed, and then announce that the Labor Party has betrayed its roots and embraced radical socialist policies more deadly in history than any racist ideology. Expose them to the uncritical swinging voters as “worse than One Nation!”

It is recklessly irresponsible to not preference Labor and the Greens last.