Exactly one year ago, The Ezekiel Declaration was published. The document was an open letter to the Australian Prime Minister opposing the implementation of vaccination passports, especially within the church. Before long, the document went viral and attracted the support of over 3,000 concerned church leaders and more than 26,000 members and attendees. Its popularity also attracted critics, who lamented the letters 'tone' and accused the authors of casting doubt on the safety and effectiveness of the vaccines that were being imposed on the public. Of course, the criticisms did not age well. A year later, it's safe to say the authors and signatories have now been entirely vindicated in their near-prophetic concerns. In this episode of The Caldron Pool Show, Evelyn Rae chats with the three pastors who authored the declaration 12 months ago. 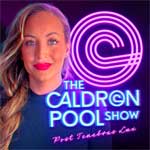