In the wake of the current political drama’s that our country is experiencing, I thought I would take the opportunity to remind people about some of the issues that have been brought to the surface. Let’s call it a ‘refresher course’ or ‘criminality for dummies’.

Let’s dive straight into the Crimes Act 1900. Now, this piece of legislation has been around for a long time in our country (since 1900) and has generally governed the majority of indictable and serious indictable offences. One of the most basic offences within this Act is Common Assault which is defined under section 61. Each offence in this Act has ‘elements’ that you need to prove in order for a person to be charged for that offence. For example, the elements of common assault are:

1. the accused
2. struck, touched, applied force to another, threatened another with immediate violence
3. intentionally or recklessly
4. without consent
5. without lawful excuse

You have to prove every single element beyond a reasonable doubt for the accused to be convicted in court. The burden of proof for civil matters is a lower standard than criminal matters, based on the balance of probabilities.

Pretty straight forward if you ask me. You touch someone or even threaten to touch someone you have broken the law. Now the elements of assault pretty much stay the same, only adding on extra elements when it comes to extent of injuries like actual bodily harm or grievous bodily harm (and with that comes higher sentencing and punishment). I hope I have you all still with me.

Now, let’s play a game, let’s pick a recent assault that has been plastered all over the news and apply the elements of the offence to see if it fits:

Would you look at that! It’s like a Cinderella moment, the shoe fits perfectly. Whether you agree or not with the actions that followed the ‘egg assault’ it’s important to also be reminded that one “crime” does not cancel out another.

Since this incident, Senator Fraser Anning has certainly been extremely unpopular in the mainstream media as well as social media platforms. But one thing that has caused growing concern, certainly for a lot of people, is the sheer hatred and want to cause violence and harm to this man, not only because of his apparent vulgar comments in the wake of the New Zealand terrorist attack but because of his reaction to being assaulted by egg boy by slapping him.

Public Facebook events have been created, inviting people to attend Parliament House in Canberra to ‘egg’ the senator whilst he is down for an event and another created to attend his offices in Sydney to ‘egg’ the building. There are over 20 thousand people who have clicked that they will be attending or are interested in attending. 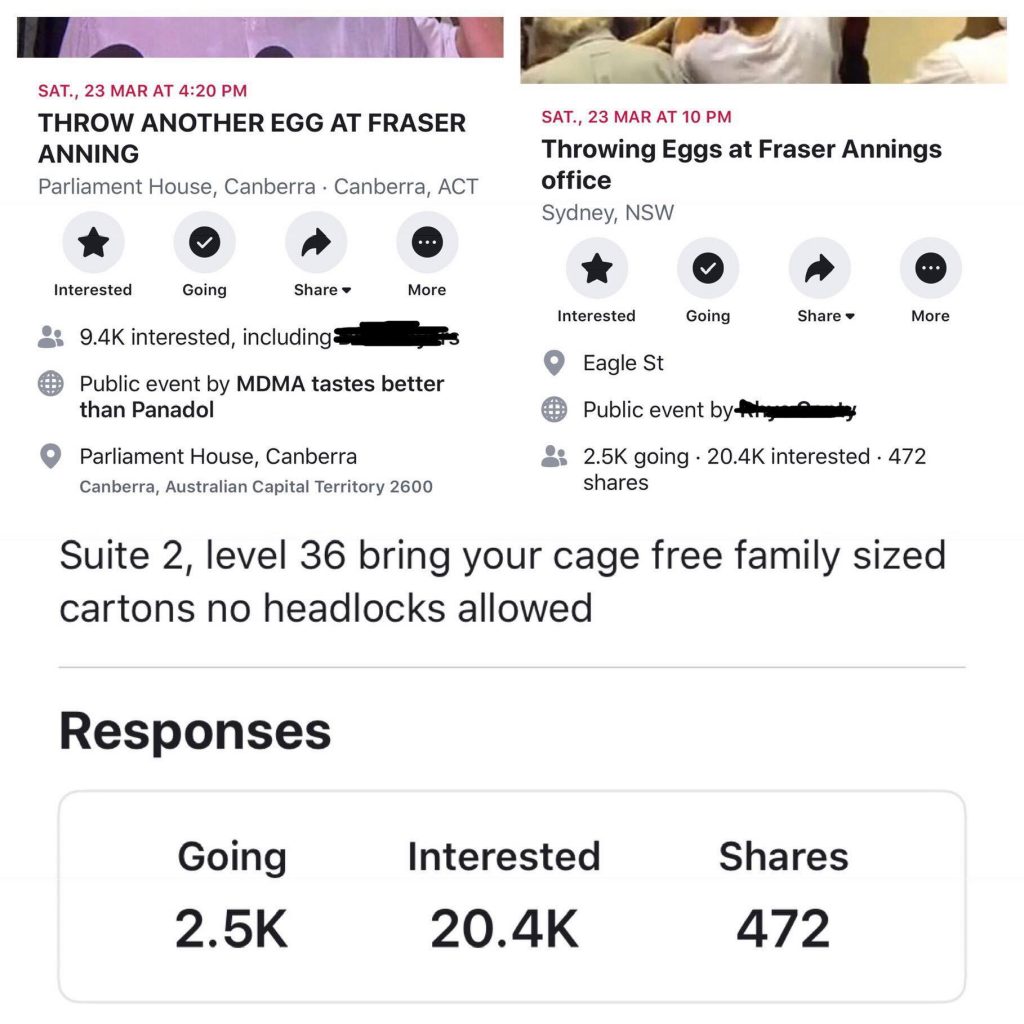 After your little refresher course into proving an offence in a criminal court, I want to leave you with a problem to solve. Let’s call it homework. Section 93B of the Crimes Act 1900 defines the offence of Riot. I would love everyone to apply these particular Facebook events to the elements of the offence and see if there’s another Cinderella moment.

93B:
1. Where 12 or more persons who are present together use or threaten unlawful violence for a common purpose and the conduct of them (taken together) is such as would cause a person of reasonable firmness present at the scene to fear for his or her personal safety, each of the persons using unlawful violence for the common purpose is guilty of riot and liable to imprisonment for 15 years.
2. It is immaterial whether or not the 12 or more persons use or threaten unlawful violence simultaneously.
3. The common purpose may be inferred from conduct.
4. No person of reasonable firmness need actually be, or be likely to be, present at the scene.
5. Riot may be committed in private as well as in public places.

It’s also worth noting, if convicted of ‘riot,’ a person is liable to 15 years of imprisonment. To put that in perspective sexual assault is up to 14 years, assault causing death (one punch) up to 20 years, choking suffocation strangulation up to 10 years and shooting a firearm at a house up to 14 years. So, riot is deemed in the eyes of the courts a very serious offence.

Lastly, I thought I’d also remind everyone of the community standards that Facebook seems to press very hard on conservatives and more alternative media sources. When these Facebook co-ordinated potential ‘riots’ were reported, Facebook claimed it doesn’t go against their community standards. Oh please… 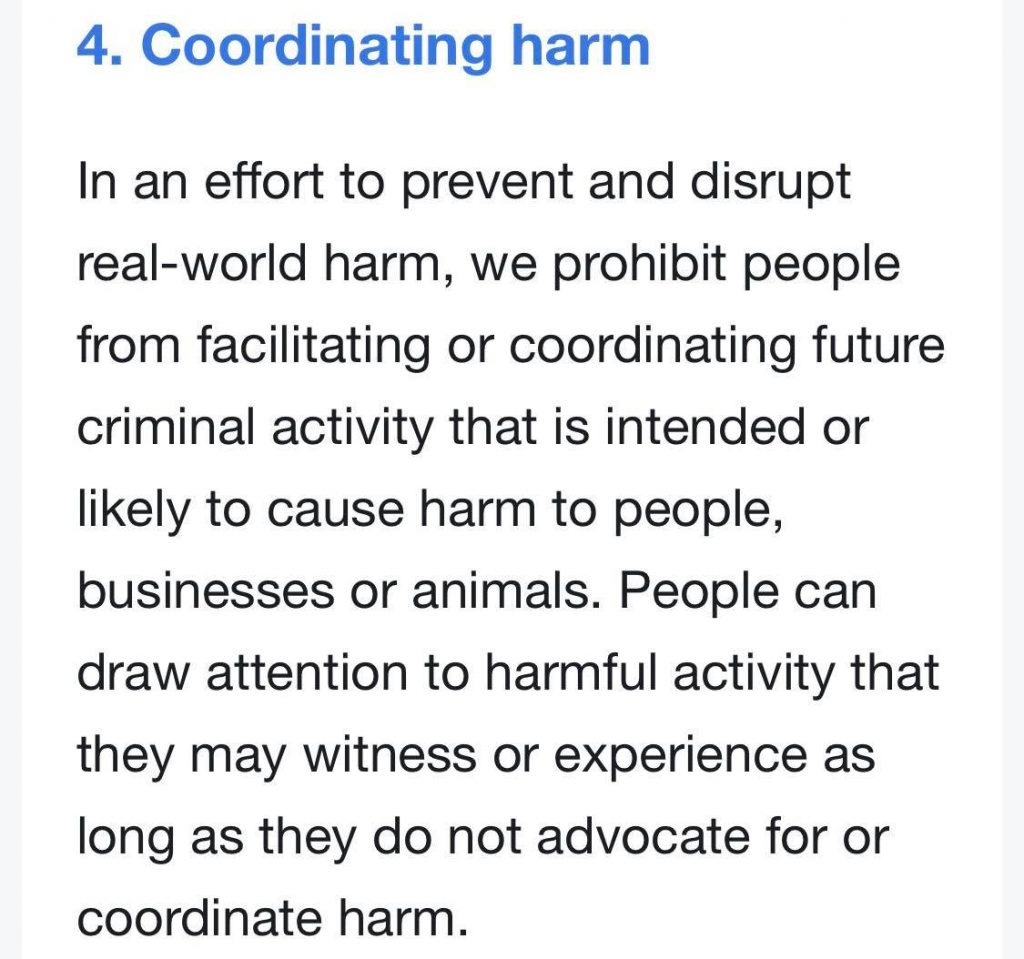 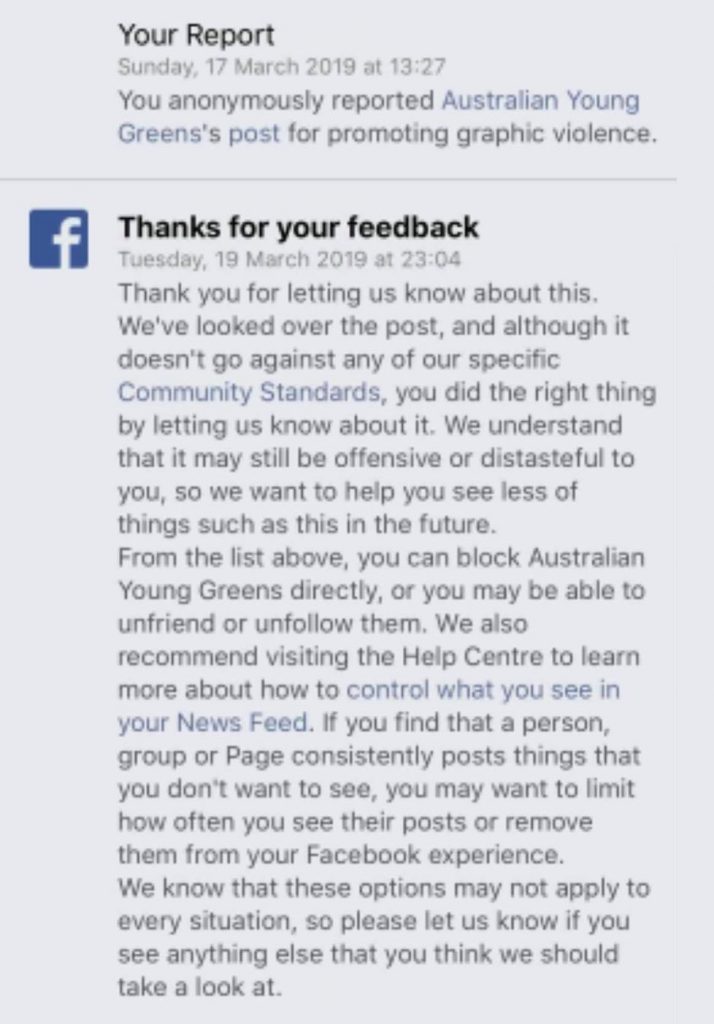 Whatever you think of Fraser Anning is irrelevant. Society needs one standard, one law, one set of rules that apply to everyone. The alternative will inevitably lead to social collapse.