From the start of his candidacy, I’ve considered Donald Trump a diamond in the rough. It’s a working hypothesis that I’ve held onto in the face of an onslaught of fear and dire predictions about his alleged “reign of terror”, a lot of which came from almost everyone I know (theologians and pastors included). Joining the bandwagon condemnation of Trump, in order to spread fear, was always a darkened side-road best left in the rear-view mirror. Minus a few friends and two years on, this hypothesis still stands strong.

While I believe that God can transform, and still is in the business of transforming people’s hearts, I’m also cautious of Donald Trump and the euphoric support which surrounds him. For instance, I’m no fan of the ‘’god emperor’’ memes or any view of Trump that implores manifest destiny or deus ex machina.

I’m as fervent in my caution about this as I am in my opposition to people who deify victimisation, and use reckless narratives in order to irrationally “Hitlerise” personalities, because they see potential political gain in doing so. (No one should seek to make a profit from suffering, unless those who have suffered are the primary beneficiaries.)

My caution of Trump is the same as my caution of ‘the bureaucratic caste’1. The highlight of reports today was Trump being laughed at during his speech at the U.N. This myopic reporting gives justification for such caution. The Washington Post was drooling with satisfaction at what they said, was a fair response from the German delegation. Trump “made claims” about German dependency on Russian energy. According to the W.P., Trump, ‘as usual, got his facts wrong’. However, one look at the transcript of his speech shows that Trump was issuing a warning about the trajectory of German dependency on Russian energy. He wasn’t claiming that Germany is completely dependent on Russia, as was implied by the W.P.

Even BBC World News was quick to misquote the Trump: 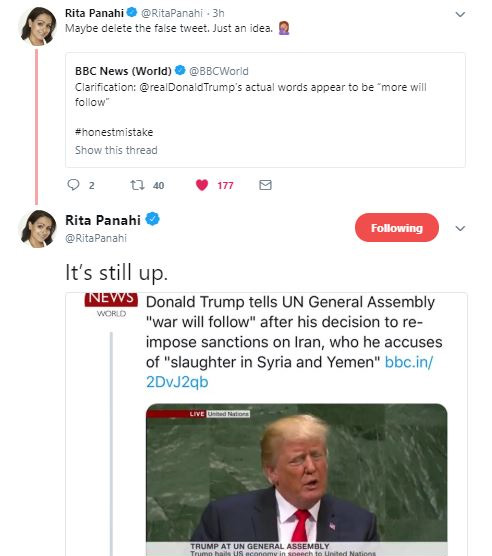 Despite the red herring headlines, there are a lot of positive things which can be said about Trump’s speech to the U.N. He rejected the ‘ideology of globalism’, called for diplomacy and a better deal. He didn’t just speak about American sovereignty. He spoke about the uniqueness of every non-belligerent nation, and their valuable contribution to the peace and prosperity of their neighbours.

In addition to this, Trump discussed the dangers of allowing globalists (and I would add in with them: those who operate from within the Leftist cult of modern liberalism2) to set the national and state, right down to regional, and local, agendas of nations; nations that allow an un-elected bureaucratic caste to rule over them, such as exists within the current structure of the European Union. This is the very definition of imperialism and Donald Trump is right to oppose it.

Globalism is imperialism. Ultimately globalism undermines the usefulness of the United Nations. Through a uniformity of identity, diversity is diminished. Behind the veil of words about diversity, equality and tolerance, there is no unity in diversity because the telos of globalism is a quagmire of sameness.

Compliance is monetarily rewarded. Dissent punished. There is no real check or balance allowed under this kind of absolute power. The global demonization of Donald Trump, and Trump administration supporters, provides a taste of life under global imperialism and how its newspeak is used to sure up its centralised control of the masses3.

Globalism is a surrender of sovereignty, rights, citizenship and cultural identity. It is the stuff of a monolithic alliance. Poised to strike at all who oppose the faceless, would-be lordless powers who control it. Higher institutions of learning are weaponized. The education industrial complex jackboot marches side by side with the entertainment and military industrial complexes. They all fall into line and are employed to indoctrinate, shame, negate history and healthy culture via manipulation, appeasement and revisionism. Thus globalism promotes the use of shaming techniques and manipulative propaganda. It provokes national genocide and advocates perpetual war behind a veil of humanitarian benevolence.

It would appear that most news outlets have chosen to report only on the areas which can be utilized to further demonize and mock Donald Trump. What’s ironic about this is that there’s a bunch of do-very-little bureaucratic elites and spectators sitting in chairs, laughing at a leader, who may have the flaw of speaking too much about his own success, and not staying on script, but is leading a team, which is, according to balanced reporting, achieving a great deal of success4; and they’re achieving this despite unprecedented attempts by a bitter and resentful group of political opponents, to manipulatively interfere in undermining that success.

For the rest of us watching it’s a bizarre era, not because of Donald Trump and his idiosyncrasies or flaws, but because of the bizarre behaviour of many who cry wolf, simply because he was elected President of the United States.

Perhaps Trump and his critics could take a step back and consider what Theodore Roosevelt said in 1910:

The poorest way to face life is to face it with a sneer. There are many men who feel a kind of twister pride in cynicism; there are many who confine themselves to criticism of the way others do what they themselves dare not even attempt…

It is not the critic who counts; not the man who points out how the strong man stumbles, or where the doer of deeds could have done them better.

The credit belongs to the man who is actually in the arena, whose face is marred by dust and sweat and blood; who strives valiantly; who errs, who comes short again and again, because there is no effort without error and shortcoming; but who does actually strive to do the deeds; who knows great enthusiasms, the great devotions; who spends himself in a worthy cause;

who at the best knows in the end the triumph of high achievement, and who at the worst, if he fails, at least fails while daring greatly, so that his place shall never be with those cold and timid souls who neither know victory nor defeat. (‘Man in the Arena’)

While I still see Trump as a diamond in the rough, I remain cautious. He isn’t God. He is human and therefore prone to the same temptations and failings as the rest of us. This same caution needs to also be applied to those who would seek to be our self-appointed lords, such as an un-elected bureaucratic caste; those who would gain and then maintain power via newspeak, agitprop and by profiting off of the subjugation of others.

Donald Trump is right to oppose globalism because it is another form of imperialism. The conclusion of globalism is injustice; a quagmire of sameness enforced by foreign rulers over nations not their own. A monolithic alliance filled with paralysed citizens, who are burdened by a meta-state with division, mistrust, fear and suspicion.

Criticism of Trump and those in his administration should be heard, but every thinking person should apply the necessary filters to sift the wheat from the chaff. For the words of America’s 26th President, Theodore Roosevelt, still ring true: ‘the poorest way to face life is to face it with a sneer. There are many men who feel a kind of twister pride in cynicism; there are many who confine themselves to criticism of the way others do what they themselves dare not even attempt…’5

Britannica defines Imperialism as ‘state policy, practice, or advocacy of extending power and dominion, especially by direct territorial acquisition or by gaining political and economic control of other areas.’

In the light of this, Donald Trump’s “no” to globalism, is a no to imperialism and a “yes” to freedom.