“There is a willful amnesia about the roles Africans played in the slave trade,” according to Nat Nunoo-Amarteifio, historian, author and former mayor of Accra, Ghana’s capital.

Speaking with PRI’s The Word, Amarteifio said when Europeans came to Africa in search of gold, they found an already existing slave system that they later adopted for the New World.

Initially, most of the slaves who were traded by the rulers of West African states and kingdoms were criminals and prisoners of war. Frequent conflicts between competing tribes resulted in the availability of captives for purchase after it was discovered that it was more profitable to sell your enemy rather than simply kill him.

But as the demand for slaves increased, slavery replaced other criminal sentences, while African rulers, traders and military aristocracy grew wealthier and wealthier through the trade.

Wars and raids were eventually carried out by African chiefs solely for the purpose of taking captives. Individuals were falsely accused of crimes in order to be sold. S. Pearl Sharp notes that even some families sold their children into slavery to clear their debts.

But it wasn’t the Europeans capturing the Africans, according to Amarteifio. “They couldn’t do so without getting sick and dying from illnesses such as malaria,” he said. “So, African ethnic groups seized the business opportunity and began warring with other groups in order to capture prisoners and then sell them.”

Millions of men, women, and children from inland villages were kidnapped by African slave traders and raiders in the process and forced to march to the slave-trading centres on the coast where they were sold to Europeans and the Arabs slave trade.

“The organization of the slave trade was structured to have the Europeans stay along the coastlines, relying on African middlemen and merchants to bring the slaves to them,” said Toyin Falola, a Nigerian professor of African studies at the University of Texas. “The Europeans couldn’t have gone into the interior to get the slaves themselves.”

Amarteifio explained: “To pursue slavery successfully, you need a highly organised group because somebody has to go out there — somebody has to locate the victims; somebody has to lead an army there; somebody has to capture them, transport them to the selling centres; all the time, keeping an eye on them to make sure they don’t revolt. And then sell them, and move on.”

In 1788, Dr Alexander Falconbridge, a surgeon who served aboard a number of slave ships, said he had “great reason” to believe that most of the slaves purchased by the Europeans were kidnapped and sold by their own people:

The extreme care taken by the black traders to prevent the Europeans from gaining any intelligence of their modes of proceeding; the great distance insland from whence the Negroes are brought; and our ignorance of their language (with which, very frequently, the black traders themselves are equally unacquainted), prevent our obtaining such information on this head as we could wish…

I was told by a negroe woman that she was on her return home one evening from some neighbours… she was kidnapped and [even though] she was big with child, sold for a slave.

This was also the experience of Ottobah Cugoano, a former slave who in 1787 wrote:

I must own, to the shame of my own countrymen, that I was first kidnapped and betrayed by some of my own complexion, who were the first cause of my exile and slavery.

The process of carrying out raids in order to capture slaves was explained in 1789 in the memoirs of former-slave, Olaudah Equiano:

When a trader wants slaves, he applies to a chief for them, and tempts him with his wares. It is not extraordinary, if on this occasion he yields to the temptation with a little firmness, and accepts the price of his fellow creature’s liberty with as little reluctance, as the enlightened merchant. Accordingly, he falls upon his neighbours, and a desperate battle ensues. If he prevails, and takes prisoners, he gratifies his avarice by selling them.

During a 2014 TED Talk titled, ‘The Atlantic slave trade: What too few textbooks told you‘, Anthony Hazard, assistant professor in the Ethnic Studies Department at Santa Clara University, said, African rulers and merchants, didn’t view their captives as fellow Africans, but as criminals, debtors, or prisoners of war from rival tribes.

By selling them, kings enriched their own realms and strengthened them against neighbouring enemies. African kingdoms prospered from the slave trade… Capturing slaves became a motivation for war rather than its result.

To defend themselves from slave raids neighbouring kingdoms needed European firearms, which they also bought with slaves. The slave trade had become an arms race.

When the British eventually abolished the slave trade, the move was met with fierce opposition, not only from European slave traders but also from African rulers who had immensely profited from the business of selling their captives to the Europeans and Arabs. 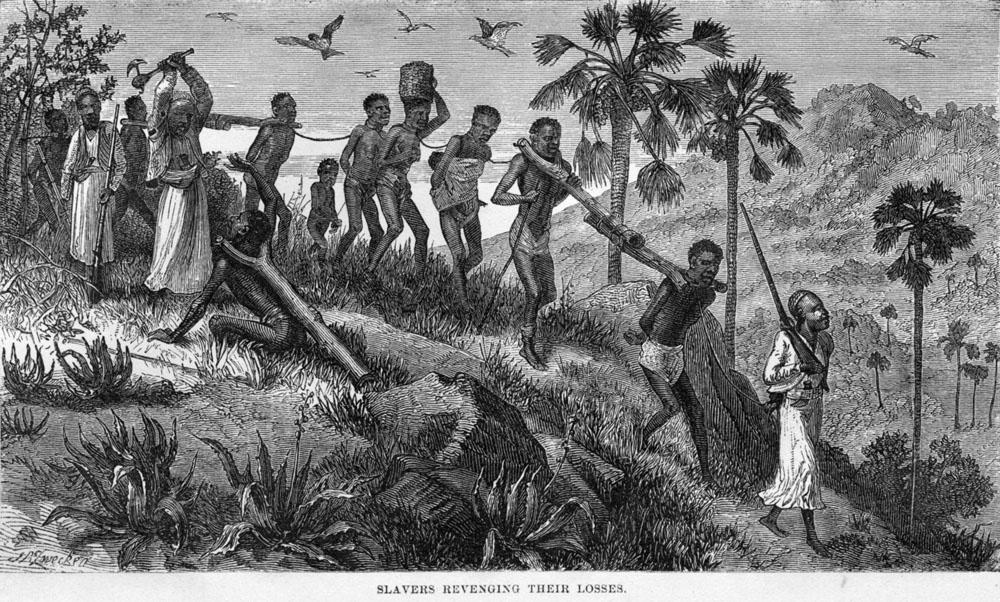 The British began patrolling the coastlines to ensure no illegal slave ships were still in operation and protection treaties were established with African chiefs. However, the slave trade still continued in many parts of Africa.

According to Amarteifio, the African role in the slave trade was deliberately forgotten and replaced with a false history.

“The chiefs and peoples decided, ‘All right, we will not talk about it.’ They created a mythology that we were innocent bystanders whose land was raped by Europeans.”

Last year, Nigerian author Adaobi Tricia Nwaubani wrote an essay that was published in the Wall Street Journal on the African role in the slave trade. Nwaubani notes that despite the fact that Africans were deeply involved, the debate about guilt and responsibility is largely absent in Africa.

According to her piece, Donald Duke, former governor of Calabar, Nigeria, said he doesn’t feel ashamed for his ancestors’ participation in the slave trade.

“I’m not ashamed of it because I personally wasn’t directly involved,” he said.

But Duke doesn’t want Africa’s dark history ignored or forgotten either. While governor, Duke established a museum of Calabar’s history as a slave-exporting hub.

In modern times, slavery has often been characterised as an injustice uniquely carried out by predominately white nations, but this reflects an entirely false view of history.

As African-American economist and social theorist Thomas Sowell pointed out, slavery has been a universal institution for thousands of years, as far back as you can trace human history. And whites were not immune.

Until slavery was abolished by British Christians, it was universally practised for as long as we’ve known. It was the norm across the world. All known societies above the very primitive level were slave societies. So, it’s not possible to isolate one particular group as responsible.

But as historian Rodney Stark notes, it is amid this universal slavery that only one civilization ever rejected human bondage: Christendom, and it did it twice!

Or as contributor James Macpherson recently put it, “The West didn’t create slavery, but the West did end it.”

As the following map from the Global Slavery Index reveals, those predominantly white countries which are continually singled out for their involvement in the slave trade have done the most to end slavery.

Tragically, there are approximately 9 million men, women, and children still living in modern slavery throughout Africa to this day.