Izzy Folau is in the news again for saying something offensive. This time it’s not because of something he posted on social media but what he said in church. If you haven’t done so already, take the time to listen to his twelve-minute sermon before reading any further…

However, this time it was not only those in the unbelieving media who were quick to pour scorn n Folau, but many within the Christian Church were eager to distance themselves as well. Everyone from the Prime Minister Scott Morrison—who said that Folau’s comments were “appallingly insensitive”—to Brian Houston who wrote on Twitter: 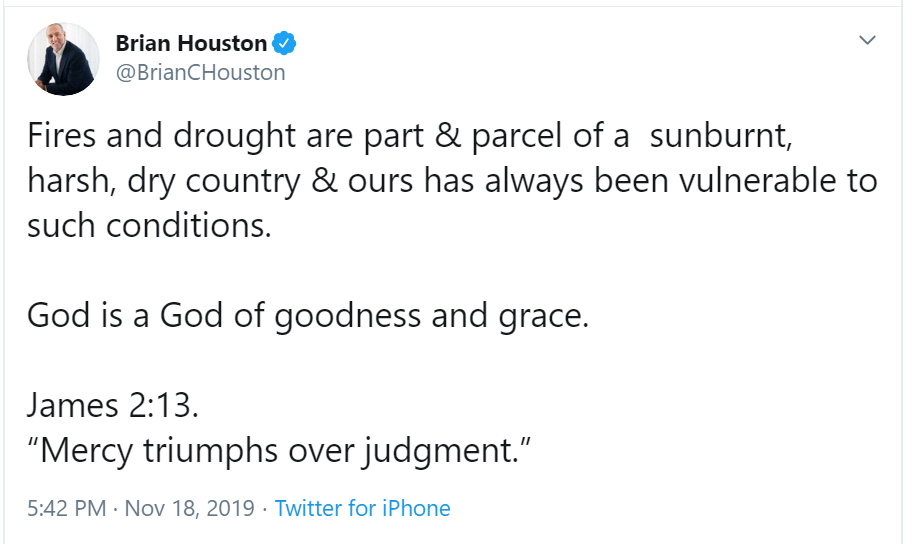 But Houston’s tweet exposes two major flaws that are common amongst Christians today. The first is that Houston seems to believe in a kind of theological ‘deism’ where the LORD is not in control of everything that occurs, but only there to provide “goodness and grace”. But this is far short of the Biblical picture of God being sovereign even over disasters (see Amos 3:6; Matthew 10:29; Revelation 6).

The other problem is it not only lacks pastoral sensitivity but seems to suggest that we should never emphasise the judgment of God. Ironically, the quote from the second half of James 2:13 seems to suggest that God is again only interested in showing mercy and not judgment. But the words just before this show that it’s talking about how we should relate to one another rather than how the LORD relates to us.

Speak and act as those who are going to be judged by the law that gives freedom, because judgment without mercy will be shown to anyone who has not been merciful. Mercy triumphs over judgment.

Maybe it’s Pastor Houston, though, who should be showing his fellow believer ‘mercy’ rather than ‘judgment’ in publicly condemning his words…

But as if these two examples were not bad enough, then along came the Centre for Public Christianity, who issued the following media release: 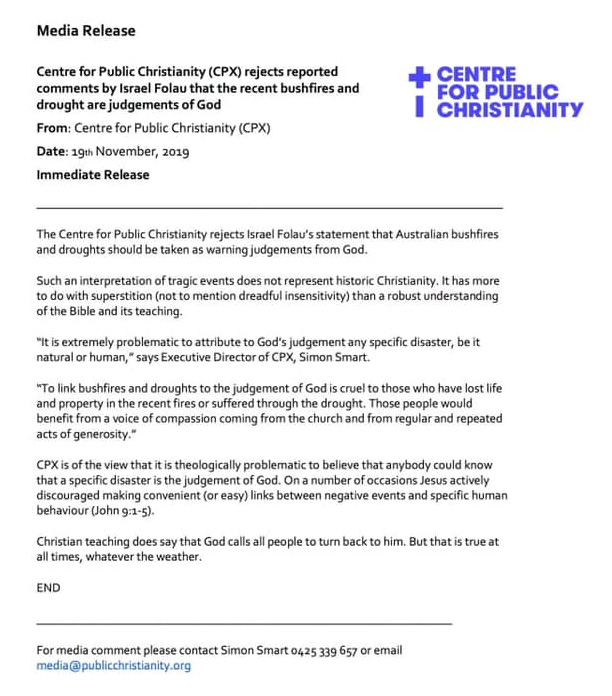 Once again, there are a number of significant flaws with this particular statement. In fact, one could even argue that each and every paragraph is erroneous:

First, how can a Christian organisation state that they categorically reject the statement that “bushfires and droughts should be taken as warning judgments from God” without also denying the sovereign hand of God in all things calling on people to repent? (i.e. Psalm 2:10-12; Revelation 9:20-21). As John Piper writes:

Diseases and deformities are God’s portraits of what sin is like in the spiritual realm. That is true even though some of the most godly people bear those deformities. Calamities are God’s previews of what sin deserves and will one day receive in judgment a thousand times worse. They are warnings. And that is true even when they sweep away Christ-followers and Christ-rejectors.

Second, to say that “such an interpretation of tragic events does not represent historic Christianity” and “has more to do with superstition…than a robust understanding of the Bible and it’s teaching” is not only inaccurate but just plain wrong. Christians have always believed that disasters are part of the judgment of God as can been seen here in this article by Andrew Atherstone.

Third, it is wrong for Simon Smart, the Executive Director of CPX, to say that “it is extremely problematic to attribute to God’s judgment any disaster” without qualification since this is what the Bible itself does on multiple occasions in both the Old and New Testaments (see Genesis 19; Obadiah; Acts 5, 12; 1 Corinthians 11:30; James 5:14-16)

Fourth, it is disingenuous for Smart to also claim that it is “cruel to link droughts and bushfires to those who have lost life and property in the recent fires or suffered through the drought” since Israel Folau himself never made any such connection to the individuals concerned. Instead, his words of warning were to the people of Australia as a whole.

Fifth, it is also wrong for CPX to assert—again without any qualification—that “it is theologically problematic to believe that anyone could know that a specific disaster is the judgment of God”. Theologically “problematic” for everyone, or only people living in the New Testament without a gift of prophecy. Because the Bible often makes the link between a specific judgment and a specific sin in both testaments (i.e. Genesis 19; 1 Corinthians 11:30).

Sixth, it is misleading to say that “Jesus actively discouraged making convenient (or easy) links between negative events and specific human behaviour”. While we are never to make a one-on-one correlation between sin and suffering (e.g. Job 1-2; Luke 13:1-5) Jesus does sometimes make a direct connection between disaster and people’s behaviour (Luke 19:41-44; 21:20-24; 23:28-31).

And finally, seventh, while God is always calling on people to repent, it is naïve in the extreme to suggest that disasters are not effective in humbling people to do so. As C.S. Lewis famously wrote in his classic, The Problem of Pain:

We can ignore even pleasure. But pain insists upon being attended to. God whispers to us in our pleasures, speaks in our conscience, but shouts in our pains: it is his megaphone to rouse a deaf world.

All of which is to say, there is more Gospel courage in Israel Folau then there is currently being portrayed in most Christian leaders today. Especially in his willingness to confront behaviours—such as homosexuality and abortion—which are culture currently champions as being ‘sweet’ when the Scriptures declare that they are ‘bitter’ (Isaiah 5:20)

It may not be in vogue to say so, but disasters are always a sign of God’s judgment calling on mankind to repent of our sins. As Research Professor, D.A. Carson, says in his devotional For the Love of God (Vol. 2, November 9), reflecting on the ecological devastation that the prophet Joel declares is about to occur in the Promised Land:

The locust plague pictured in Joel 1 is a phenomenon well known in some parts of the world today. Once locusts have swarmed, they are almost impossible to stop. Really terrible plagues of locusts were recognized for what they were: the judgment of God.

This is a good place to reflect for a moment on how we should think about disasters. We should not adopt the stance of fatalists. If we can stop locusts today (satellites can sometimes spot incipient swarms that are then stopped by trucks with pesticides), then we should do so—in exactly the same way that we should try to stop war, plague, AIDS, famine, and other disasters. But in a theistic world where God is sovereign, we must also hear the summoning judgment of God calling his image-bearers to renounce sin’s selfism and cry to him for mercy.

All of which is to say, Israel Folau’s sermon is essentially right about the theological connection between disasters and the judgment of God. And we would do well to heed their warning before something even worse to us occurs (John 5:14).