Thousands of pro-life families gathered at Sydney’s Hyde Park on Sunday afternoon to take a stand for the lives of the most vulnerable members of our society. The ‘Stand for Life’ rally, which reportedly attracted 10,000 people, was organised in response to one of the most radical abortion bills in the country.

The Reproductive Healthcare Reform Bill 2019, as it’s euphemistically named, will legalise abortion on demand, by any method, up to 22-weeks. Beyond that point, right up until birth, all that is required for an abortion is the consent of two abortion doctors. The bill even prevents an aborted child who is born alive the right to medical treatment and care.

The rally featured a number of prominent political figures, including Former Prime Minister Tony Abbott, who warned the bill will lead to “infanticide on demand.” Former Nationals Leader Barnaby Joyce also took to the stage, calling it “the slavery debate of our time.” While Fred Nile, leader of the Christian Democratic Party told the crowd the legislation was the worst he’d ever seen.

But it wasn’t just politicians addressing the crowd. Rev Dr Peter Barnes, the Moderator-General of the Presbyterian Church of Australia was also invited to speak.

Dr Barnes drew attention to the two conflicting worldviews at play behind the abortion debate. As Dr Barnes told the crowd, according to one worldview, you have dignity, you are precious, you are valuable, provided that somebody else wants you. To be ‘unwanted’ is to lose the right to life.

On the other hand, the alternative is the Christian worldview, which says you have an inherent dignity because you were created in the image of God. That means an individual’s worth and value does not hinge on another person’s opinion. Human life is intrinsically precious, even when others refuse to see that.

Following the event, Dr Barnes spoke to Caldron Pool and expanded on this crucial difference between the two competing worldviews at play:

The Marquis de Sade may have had more compassion than many NSW politicians. What we are seeing is the confrontation of two world views. The first says that human beings have a right to life if they are wanted. One would think that would be the last philosophy of life to be embraced by a politician, but that is what is being promulgated.

The second view comes from the Bible, that we have a right to life because we are created in the image of the God who made us. This does not give us automatic entry into the kingdom of God but it gives us meaning, worth, and, yes, responsibility in God’s world. To look after children is a wonderful God-ordained task; to kill them in the name of convenience or liberation is appalling indeed.

Among those in the crowd, were a number of notable Christian leaders. We asked them to reflect on and share their thoughts about the rally.

Rev Mark Powell, former moderator of the Presbyterian Church of NSW and ACT said: “It was heartening to see people from some many different denominations united in their stand for life.

“Sadly, too many protestants today are more concerned with refugees and the environment than they are with protecting the rights of the elderly (euthanasia) or an unborn child (abortion).

“What has become increasingly clear to me is that we need to have the wisdom and courage to address ethical issues that are not supported by the broader community as well as those that are.”

Dr Michael Prodigalidad, Minister of Stanmore Baptist Church said: “Protestants are infamously known for their disagreement on a range of issues, so it takes a pretty serious matter to bring Baptists, Presbyterians, Anglicans and other groups together. Furthermore, what matter could possibly unite Evangelicals and Catholics? What do those of faith and non faith share in common? The one thing we all share is the experience of human life.

“That’s why thousands gathered chanting “Love them both” at the Stand for Life rallies. The preciousness of each and every life resonates deeply within all of us, transcending creed and confession. It is why we instinctively abhor the taking of innocent life. We were all knit in our mother’s womb, made in the image of God.

“However, Christians should have further motivation for action. Through the Gospel, are we not those that have been saved from death to life? Have we not been rescued for good works? The life of Jesus Christ was committed to redeeming the weak, the helpless and those who could not rescue themselves. The rallies of recent weeks have been encouraging, but they should just be the beginning. Now is the time to redouble our efforts to speak for those who cannot cry out for help themselves.” 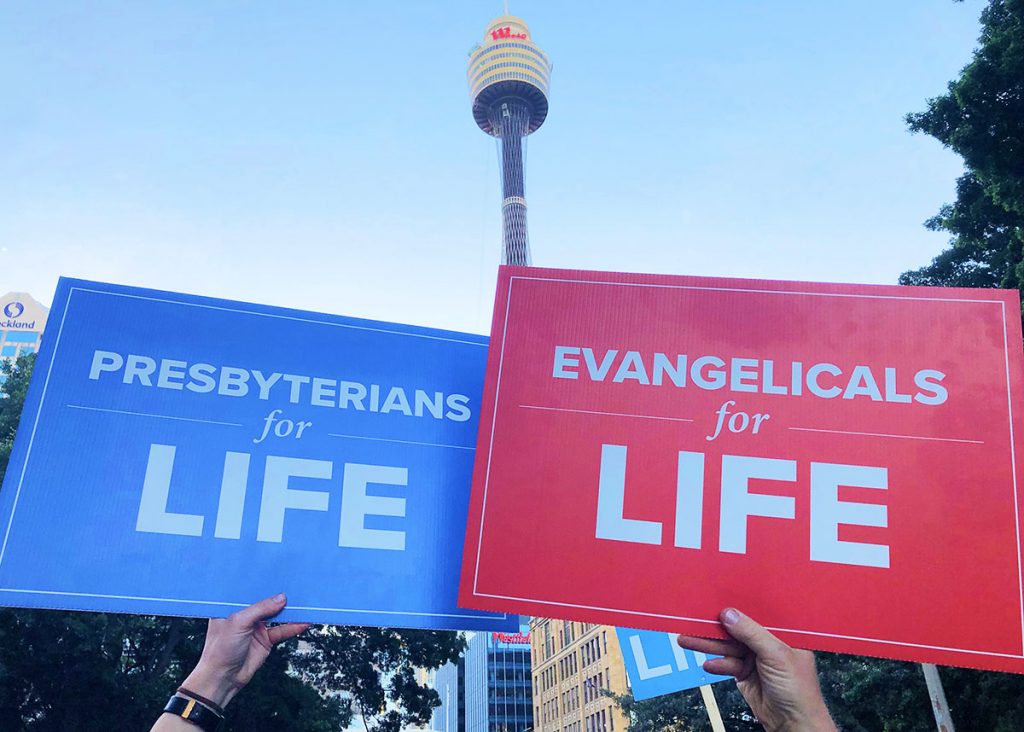 Rev David Ould, Senior Associate Minister at St John’s Anglican Cathedral Parramatta said: “A few weeks ago I wrote an article asking “where are the protestants in the abortion campaign?”. Sunday’s protest rally provided the beginning of a far more encouraging answer. As I walked my way around the enormous crowd I came across face after face of protestants that I knew, all galvanised over the past few weeks so that they were now also ready to stand for life.

“As one famous Catholic said from the stage, this is the slavery debate of our age. It was evangelicals who led the abolition movement in the late 17th and early 18th centuries. I’m optimistic that Evangelicals are now increasingly finding their feet and their voices and their votes to campaign against this even greater evil.”

Dr Stephen Chavura, Lecturer in History at Campion College said: “The rally shows a few things. It shows the relative commitment of pro-lifers to their cause compared to the pro-choices, whose numbers at their rally never came close to the pro-lifers’.

“These rallies also show how effective churches can be as agents of policy change, as they are easily mobilised once they wake up. We have the potential to be a perpetual political factor in all policy from now on if we want. That is, if we choose to stay awake. Church-going Christians are the single largest political lobby group in Australia if they want to be.

“The rallies prove that “showing up” works. The NSW government is now talking about amendments. Showing up and writing in are still the most powerful popular means of political pressure, and the churches are the social institutions most easily mobilised to do this. Again, Christians can accomplish a lot if they really want to.”

Dr Chavura went on to say, “The question is whether the protests and vigils over the last month are the high-point of Christian activism or merely the inception of a new Christian activism which will get bigger and bigger. Time will tell, but the latter is most definitely up to us.”

Let’s not fall back into apathy. We need to be more energised and enthusiastic about life than our opponents are about death. Let’s continue to fight, stand, and speak for those who cannot. Together, we have far more influence on this nation than we realise.