I recently went to see my local member who also happens to be the NSW Opposition Leader, Jodi McKay, about the now notorious ‘Reproductive Rights Bill’ which she had so jubilantly spoken in favour of in the Lower House. And she very kindly gave me a copy of her speech in which she made the oft-repeated assertion:

Between 20 and 25 per cent of women in Australia will have an abortion in their lifetime.

Seeing that Ms McKay is a former lobbyist for Family Planning NSW—and is still the ‘phone voice’ you hear when you call—I initially took the accuracy of her statement at face value. But then I thought, “How does she know?” Because this crucial piece of statistical information formed the basis of her argument that abortion should be decriminalised in that it made it ‘normal’.

But then I started to do some digging…and this is what I found. According to a research brief for the Department of Parliamentary Services:

…The South Australia data is sometimes used to calculate estimates of national abortion rates. For example, in 2002 there were 5417 abortions notified in South Australia, which equals approximately 17.2 pregnancy terminations for every 1000 aged between 15 and 44 years. If this rate were replicated in the total Australian population of women aged 15-44 years (the so-called ‘fertile age range’) for the same time period, there would have been approximately 73 300 abortions in Australia in 2002.

All which leads to the government report concluding (emphasis included):

In providing an overview of the data on abortion in Australia which is currently available, this Research Brief has demonstrated how vexed this question is. Each of the three major publicly available data sources on abortion—Medicare data, hospital data and South Australian data—can be used to estimate, in fairly crude terms, the incidence of abortion. However, none of these, either singularly or in combination, can be used to quantify accurately the number of abortions which take place in Australia each year.

Further, the rate of women seeking an abortion has been consistently falling: 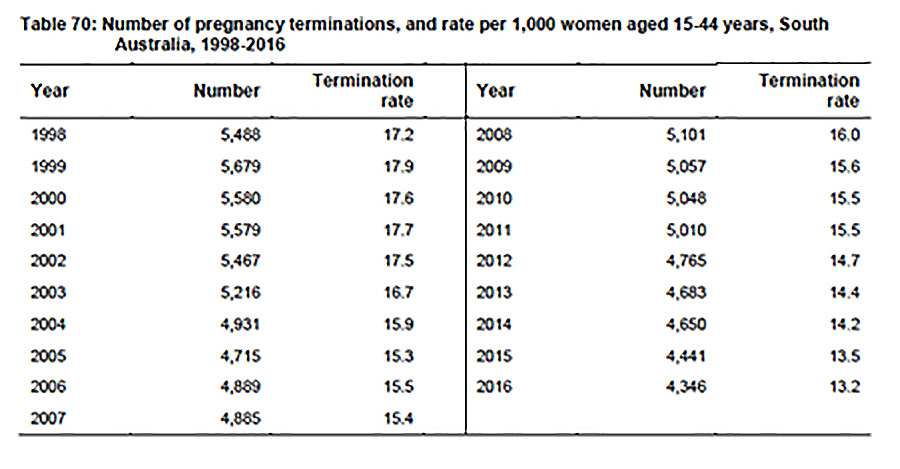 With 260 business days in a year, that means that in 2014 (for instance) approximately 18 abortions were performed in South Australia every day. To put that into an even wider perspective, 14.2 terminations per 1000 gives a figure of a mere 1.4% of all women within the ‘fertile age range’ of 15-44. This is obviously nowhere near anything of the magical 20-25% figure being quoted by McKay.

What’s more, these statistics don’t take into consideration the total number of women who will go on to have more than one abortion over the rest of their lives. For instance, in 2014, there were 1676 repeat abortions out of a total of 4650. Or 36.1% of all terminations. Put differently, 1 in 3 women who have an abortion will at some point in their lives go on to have at least a subsequent one:

Once again, how can McKay suggest that 20-25% of Australian women will have an abortion throughout their lifetime? Especially when only approximately 1.4% of women have an abortion each year and 63.9% of women are only accessing the service for the very first time? The statistical information needed to make such an assertion is not only unavailable, but the data which we do have tells a completely different story!

Why this is so important is because democratic systems of government are predicated on representing fairly the interests of its citizens. As Larry Kramer, the co-founder of the pro-gay group ACT UP was reported in Time as having said regarding the grossly inflated statistic that ten percent of men were homosexual:

The 10% figure became part of our vocabulary…Democracy is all about proving you have the numbers. The more numbers you can prove you have, the more likely you’ll get your due.

There was, of course, only one problem. As the article in Time magazine, “The shrinking ten percent” went on show, surveys were showing that the actual figure for male homosexuality is not 10%, but 1% of the population! As David van Gend, in his masterful Stealing from a Child: The Injustice of Marriage Equality (Connor Court, 2016), explains:

The 10% figure haunts the popular imagination. This is partly because…close to 10% of teenage males have had some passing homosexual experience – but most of them leave that behind and do not consider themselves ‘gay’. The other source of the 10% figure is the discredited work of zoologist Alfred Kinsey and his child-abusing ‘researchers’ in the 1940s. With an activist’s contempt for scientific process Kinsey deliberately oversampled prison populations of sex offenders to achieve his finding that a full 10% of American adults were homosexual. As the leading American statistician, John Tukey, said after his exasperated dealings with Kinsey, “A random selection of three people would have been better than a group of 300 chosen by Mr. Kinsey”.

But this is precisely the same approach—and ultimately, falsehood—which is being currently propagated by the leader of the NSW Labor Party, in framing the current debate around the decriminalisation of abortion. Because the statistical reality is that there is nowhere near 20-25% of the female population who will have an abortion throughout their lifetime. In all likelihood, it’s probably only a tiny fraction of that figure.

When it comes to shaping public policy, it is crucial that our elected officials are accurate with the information they relay. Especially when the consequences of decriminalising a particular practice are so serious and far reaching.

It is a very serious breach of trust for the leader of the Labor Party, and a potential Premier of NSW, to seek to “normalise” the practice of abortion by using of grossly inflated statistics to support her cause. The people of NSW deserve better.