In August 2016, I posted a quick response to the hysteria surrounding the election of Donald Trump. I headlined that post, ‘Why Trump is Not Hitler, & Why American Evangelicals Are Not German Christians’. My aim was to counter a lot of what I was seeing posted on social media by people who were usually level-headed and intellectually responsible.

It was disappointing to see normally sane individuals suddenly join in the anti-trump rants – which really were, I’m angry because the Leftist power structures, and its monopoly on power, has been diminished – tantrums.

Worse still, some Christian conservative academics took to social media to virtue signal to the all-powerful Left in what I can only describe as a sycophantic attempt to validate themselves in the eyes of those on their friends on the Left. Even I felt pressure to censor my view of Trump, and the current political scene, so as to not fall foul of the power brokers in my field of academic work and study.

For example, generally balanced academics picked up Karl Barth and Dietrich Bonhoeffer, forged both into anti-Trump weapons, and started swinging them around in unison with the “Trump is Hitler” chorus.

Despite the intimidation, I made an effort to work back towards unity; shared ground.

Informing my post at the time, was the fact that both Barth and Bonhoeffer, who were anti-Nazi theologians, would be unlikely to leap before they looked when it came to the political scaremongering surrounding Trump. They weren’t fans of political labels, generalised slogans, and false doctrines. Nor were they supporters of the imposition of new cultural laws, restrictions on freedom of speech, inciting the mob, Nazi flags in churches and, collective conformity to party-lines. That’s part of what made them anti-Nazi theologians.

Did some Christians commit the blasphemy of looking to Trump as though God Himself had been elected to the White House? Sure, but no difference to how people deify celebrities, or how people fell apart when their demi-god, Barack Obama was constitutionally moved on, and Clinton lost.

I agreed that there are similarities between the power structures in the 1930s and today. However, I disagreed on where those parallels exist. The similarities, between the 1930s and today, (as I’ve pointed out many times in my writing), fall parallel with socialism, repression and control of the universities by the Left. Include in this other points of contact with the 1930s, such as celebrity endorsement of socialism, abortion, and the Leftist tendency to dismiss, destroy and dehumanise anyone who disagrees them.

The danger should be clear enough. From a psychological point of view, this rampant ad hominem is recognised as emotional manipulation. Recklessly calling someone a “Nazi” is a shaming technique designed to control the opponent in an attempt to discredit, and silence them. The same goes for those who would paint all white people as racist.

Link both the reckless labelling of people as Nazis and the slogan “all white people are racist” together, and the cocktail of hate is complete. All that’s needed are chambers filled with the pesticide Zyklon B, cyclone fencing, and all those determined by the Left to be “life unworthy of life”.

Any well-informed reader who knows the history behind the genocidal rampaging in Rwanda, of the Tutsis against the Hutus, will see that there is good reason for concern.

Another similarity is the indoctrination of those on the Left by their ideological masters. Some may say that this is ridiculous. That those on the Left aren’t indoctrinated. That there is no, as I call it, leftist cult of modern liberalism. If that is true, then why has the past few years only served to show the Western world that something is amiss and, although the man has his moments, it’s not Donald Trump or the “Christian right”.

Examples of how the culture of repudiation and its dehumanising has taken hold in the psyche of the average individual are magnified by social media, and those examples are incriminating. Such as the comment to this YouTube video. 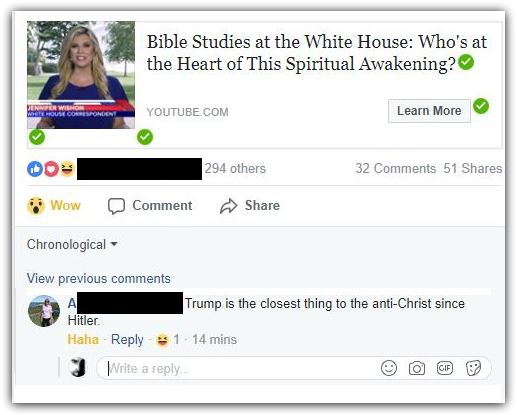 This person is a victim of the times. Here’s five reasons why their statement is flat-out wrong:

The real tragedy in all of this is that by crying wolf about Nazism, the Left desensitises people to the heinous crimes of Nazism. It reduces Nazism to the absurd; reducing the desire to call out the real thing, when it, or an equivalent, God forbid, rises once more.

False accusations turn the blood brother of Communism into a joke, potentially doing great damage to the legacy of the millions who fell and suffered at the hands of both their Nazi and Communist oppressors. The meaning and reverence in the words “never again” and “Solidarity” are not the battle cries of cultural Marxists, Antifa, Leftists or Trump haters.

Those words are prayers, and their meanings are forged in the fires of hell on earth. Something far removed from the Nike Air, Apple iPhone, iMac, ivory tower professors, simple-minded millennials, and anyone else, sucked in by those on the Left who feed them lines about oppression, privilege, the need for safe spaces, and all manner of pejorative phobias used to conveniently dismiss opposing opinions.

Accusing other people of being Nazis, without an absolute justification to back up that claim, is doing exactly what Nazis did. If we’re to truly be anti-Nazi, then the right to “punch a Nazi” falls on those victimised by the fascist behaviour of Leftists, who use a pejorative to dehumanise and dismiss, their opponents.

Like its Marxist brother, Nazism is pure evil. We cannot allow these attacks on the legacy of its victims. We must not let their memory fade at the hands of those who would rather use the fallacy of moral equivalence, for cheap applause, or to maintain the power structures of the Left than think through what it really means when they accuse Trump of being Hitler, and most Trump supporters of being fascists.

‘Yeah, his style is rude, crude and clumsy, to say nothing about childish. But we’ve tried polite, considerate and grownup and guess what – that’s what got the country where it was a year ago. I don’t much care how crude and clumsy he is as long as he continues on the trajectory he’s charted: millions of babies saved and 150 victories in 10 months. He’s not my pastor. He’s my mechanic.’

I am, when it comes to President Donald Trump, as I have been from the beginning, a cautious optimist. I see him as a diamond in the rough. I’m not yet a fan, but those, and thousands like them on the internet, who are quick to call Trump another Hitler, should be called out for what they are mindlessly repeating. Word for word, Leftist dogma and its own fascist, party-line propaganda.