More than 200 people have been killed during Easter celebrations in Sri Lanka after a series of coordinated Islamic terrorist attacks were carried out targeting Christian worshipers.

The attack has claimed four times as many lives as the recent New Zealand massacre, in which 50 Muslims were gunned down in a Christchurch mosque.

Christians in Sri Lanka, similar to Muslims in New Zealand, are a minority. Christians make up just over 6% of the population in Sri Lanka, behind Buddhist, Hindus, and Muslims.

In both attacks, a minority group was the target. In both attacks, the victims were targeted in their religious place of worship. But unfortunately, it’s unlikely we’ll witness a similar response to both attacks from our politicians and the mainstream media.

UK Prime Minister Theresa May was quick to condemn the “terrorism” witnessed in New Zealand, but simply expressed her “deepest sympathies” to all those affected by “the acts of violence against churches and hotels.” 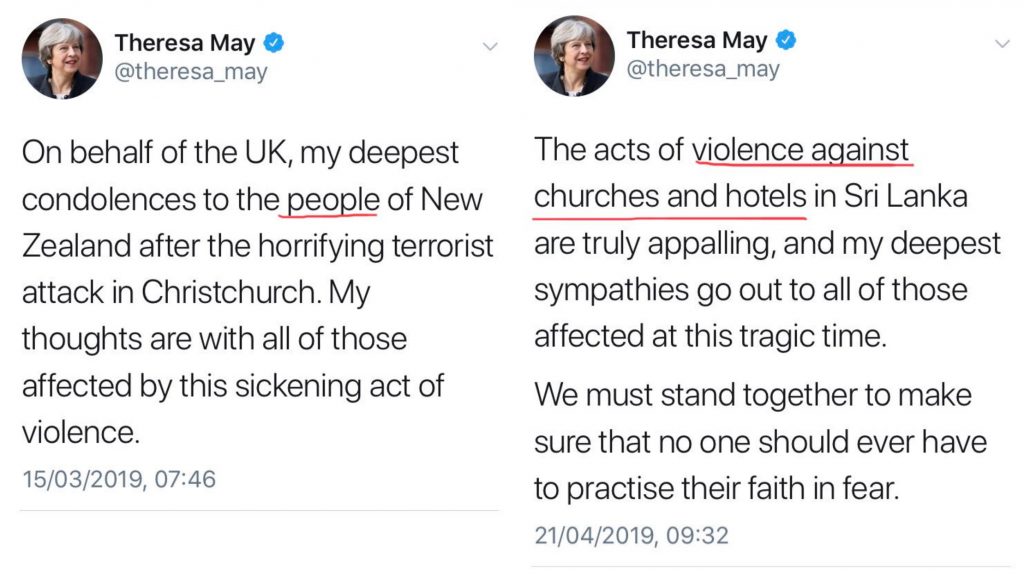 Muslim Mayor of London, Sadiq Khan, beefed up security and police presence around mosques after the Christchurch attack, but merely sent his “thoughts and prayers” to the victims in Sri Lanka.

New Zealand Prime Minister Jacinda Ardern donned a hijab and ordered a nationwide broadcast of the Islamic call to prayer, which states “there is no god but Allah alone”. We won’t be holding our breath for a national broadcast of the Lord’s Prayer. So far, Ardern hasn’t said anything on social media in response to the attack.

Political Commentator David Vance said, “Imagine if Christians targeted mosques during Ramadan and tried to kill as many Muslims as possible. The media would go ballistic. Consider the slaughter of Christians in Sri Lanka on Easter Sunday and reflect on the supine silence from the politicians.”

Similarly, Stefan Molyneux highlighted, “The corporate media was more outraged by a kid cornered by an aggressive drummer than hundreds of Christians slaughtered in Sri Lanka.”

“Compare the level of outrage with what happened in Sri Lanka with Christchurch, NZ,” Imam Mohamad Tawhidi tweeted. “Triple the amount of casualties and triple the amount of injured people. It offends me and other like-minded Muslims that we get special treatment and other equal humans don’t.”

Dinesh D’Souza rightly said, “What we learn from the disparate coverage of New Zealand and Sri Lanka terrorist attacks is that ‘news’ isn’t really news. Media coverage of events more often reflects ideological prejudices of the media than what’s actually going on in the world.”

It would appear Christian lives don’t matter all that much to our politicians and the media, much less those who live in non-white nations like Sri Lanka, Nigeria, the Philippines, and Egypt.

Where are all the Democrat candidates this morning?

50 Muslims murdered in New Zealand: WE MUST CONFRONT THE SCOURGE OF WHITE SUPREMACY!

Christianity really is under attack when you turn on the TV and the Sri Lanka terrorist attack is not wall to wall coverage like New Zealand was.

FAR less Twitter activism and virtue signaling for Catholics massacred in Sri Lanka on Easter Sunday than there was for Muslims killed in New Zealand.

The Sri Lanka death toll is now over 200 and involves multiple churches. A far worse terrorist attack than the one in New Zealand! Yet this is a terrorist attack against Christians. Where is the unceasing wall to wall coverage that we got on the New Zealand attacks?

Please give #SriLanka the same care and attention that was given to #NewZealand! 💔

God’s blessings upon those who lost their lives & their families. I pray there is the same outrage as the shootings in New Zealand which were the heinous crime of 1 person. We must end the worldwide targeted violence against Christians by Islamic terrorism. (2of2) #SriLanka

Neat how Christchurch prompted world leaders to condemn islamophobia worldwide but hundreds of Christians are killed in multiple church bombings on Easter in Sri Lanka and not a single one of these leaders condemns this particular trend.

“Some people did something,” as it were.