The attack on Masjid Al Nor and Linwood Mosques in Christchurch, New Zealand was horrific. The loss of life, the changed lives and the many painful years of grieving to come for the victims involved – all of it heartbreaking.

The world, as we’re told, now stands in mourning for the innocent lives taken. Social media is saturated with comments from those in disbelief, to those looking to show solidarity, or outrage, and those who see the attack on the Mosque in New Zealand, as an opportunity to further their own self-interest. 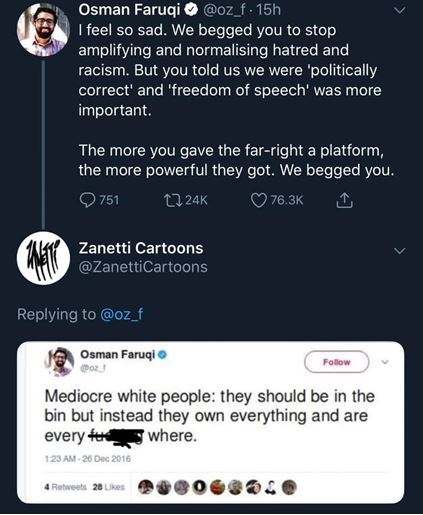 We are witnessing, and no doubt will witness, great shows of solidarity and grief, and rightly so. But selective outrage only feeds self-interest.

It should be remembered that many of those brandishing badges of sympathy, and anger, are often silent when massacres are carried out almost annually in the name of Allah and his prophet.

They are silent in the midst of global condemnation, and when featured on countless analytical panels, filled with experts unpacking the event, they dismiss the actions, by way of quiet approval with the slogan, Islam is a “religion of peace”, or by reminding people that any massacre at the hands of an Islamist is not representative of all Muslims.

We are quickly told to disassociate any blame from Islam that all such questioning is “hate speech”; all critique is written off as Islamophobic.

Yet, when an event happens that involves a non-Muslim attacking a Muslim, the guilt-by-association runs thick and fast. The opportunity to attack “the enemies of Islam” (which under Islam, is all non-Muslims) becomes far too great a temptation to resist.

Iranians are deeply shocked and saddened by Christchurch terror today.

But we're not surprised.

Banned from travel to the US, and not allowed to abide by our faith if attending French schools, we Iranians know too well what bigotry and hatred of Islam augur.#EndIslamophobiaNow

Consequently, the generalizations begin. Those under Islam, end up doing exactly what they accuse non-Muslims of doing, when an Islamist sets a bomb off in crowded arenas filled with civilians, quite often a church [most recently, Nigeria and The Philippines] all in the name of Allah and his prophet.

The individuals who perpetrated the attack are the ones to be held accountable. Anyone who demands otherwise is auctioning off the innocent, turning the victim into a political commodity. Placing guilt on an entire group of people only furthers, wherever possible, a self-serving political narrative, at the expense of victims caught up in this tragic event.

If the attackers’ manifesto is legitimate, as is currently assumed to be the case, then the facts don’t match the political maneuvering of opportunists, who jumped on this event for quick political traction against Donald Trump, Candace Owens, Conservatives and those with white melanin.1

As Peter Sweden and others are now reporting.2 The ideological motives and attachments of the attackers aren’t as clear cut, as some would have us believe.

– He was also obsessed with European birth rates
– Is vehemently AGAINST capitalism.
– He is a self described racist.
– And there is a bunch of Nazi BS talking points in there that I'm not going to repeat.

The political maneuvering isn’t just isolated to those on the Left. Right-wing, Australian Senator, Fraser Anning, will now find it very difficult to avoid the accusation that he also chose to use this tragic event for quick political gain.

Anning didn’t wait. The timing of Anning’s press release is way off, but some of his reasoned points aren’t all that out there.

Though poorly timed, dismissing some of Anning’s points is tantamount to applying a band-aid to a broken bone. Such as, dismissing concerns about the consequences of “Open Borders”, and how this policy paralyses all help offered to genuine refugees, by way of importing the very crisis and form of government those refugees are fleeing from.

Add to this the concerns of many Westerners who question the challenge of importing a people, who can find, and have a place in the West, but who have among them, people who insist upon holding, and in some cases imposing, a political ideology that is very limited in its compatibility with Western Civilization, Judeo-Christianity and Classical Liberalism.

Those parts of Anning’s statement suggests, that he was making an attempt to communicate that the tragic, calculated attack at the Mosque in New Zealand is perhaps, as much a symptom, as it is a sin.

As dumb as the timing of Anning’s statement was, it’s an expression of frustration; written for all who refuse to listen to those who feel their views are underrepresented in the major political parties; those who have real, and rational (and, yes, some irrational) concerns about the trajectory of their countries and communities.

After the necessary period of mourning, politicians need to take the time and listen to those concerns, instead of instantly dismissing them and the people who express them, as “unwelcome”, “offensive”, “racist”, “Nazi”, “phobic”, or “unChristian”.

To refuse to do this is to continue to ignore the storm that’s been darkening the horizon, but has been dangerously dismissed, by far too many, for far too long.

It’s telling when one incident is picked up and widely carried as the tragedy that it is, and yet MANY others, like the constant harassment of Coptic churches and Christians in Egypt,3 who face things like what happened in N.Z on close to a monthly basis are shrugged off and dismissed.

Just as the attack in the Philippines4, back in January was and still is; very few paid ANY attention to it, others probably still have no idea it even happened. Just as the dismissal of attacks on white farmers5 in South Africa, and the dismissal on anyone who criticizes those attacks.

There is no denying the fact, that the ‘eco-fascist terrorist attack’ on these Mosques in New Zealand, was a tragedy.

It is a time to mourn. We comfort the suffering and seek justice for the innocent victims involved, but this should precipitate a much needed time to listen and talk.

If you choose to mourn, and make a public display of it, choose also to mourn for North African, Nigerian, Middle Eastern and Asian Christians, who face this kind of vicious, selective slaughter on a regular basis.

Many are ‘facing growing persecution around the world, fuelled mainly by Islamic extremism and repressive governments, leading the pope to warn of “a form of genocide” and for campaigners to speak of “religio-ethnic cleansing”. (The Guardian, 2015)6

There wasn’t, nor has there been any Worldwide mourning for them.

If you mourn, mourn for these also.