An Australian bridal magazine has been forced to shut down after its Christian owners decided not to feature homosexual weddings.

In September more than 100 contributors boycotted White Magazine after it was revealed the publication was “silent” on the subject of gay marriage.

Sandra Henri, advertiser and eco-wedding expert, told AAP, she was disappointed with White’s “silence” on the day the postal survey result was announced. “The silence has continued since then,” she said.

Advertiser and photographer Ona Janzen said, “If I had known they don’t support SSM I wouldn’t have chosen to spend a good portion of my marketing funds with their magazine, on principle.”

Photographer Lara Holtz who alledgedly was one of the first to incite the backlash against the magazine said, “Just for the record the closure of a magazine was never the desired outcome or intention for the request for White Magazine to be transparent about their beliefs and values.” 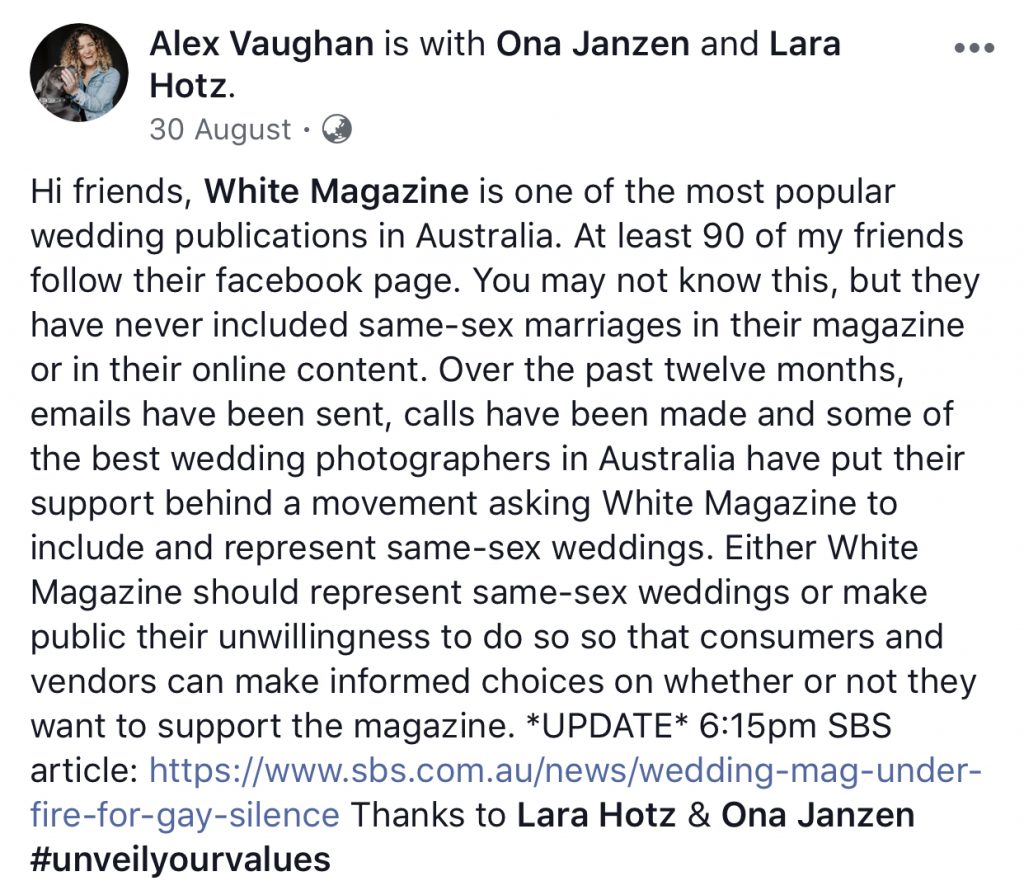 A statement issued on the White Magazine’s website reads:

Last year the Australian law was changed to allow same-sex couples to marry. Since then we have been asked repeatedly why our magazine had not yet featured all couples.

Like many people, we have had to reflect on our beliefs, not to judge ourselves or others, but to intentionally make space for new conversations. It’s a long and continuing journey, it’s not black and white, there are so many grey areas that need to be explored. Our greatest mandate is to love and the biggest question we’ve continued to ask ourselves throughout it is, how do we best love?

White Magazine has always been a secular publication, but as its publishers, we are Christian. We have no agenda but to love. We have no desire to create a social, political or legal war, which only divides people further and does more damage than good. To us, our faith is anchored in love without judgement.

Recently we’ve experienced a flood of judgement. We know much of that comes hand-in-hand with running a public magazine. But we are also just two humans fumbling our way through these big questions and like anyone else, and we don’t have all the answers.

Instead of allowing us the space to work through our thoughts and feelings, or being willing to engage in brave conversations to really hear each other’s stories, some have just blindly demanded that we pick a side. We’re not about sides, we’re about love, patience and kindness. A campaign was launched targeting the magazine, our team and our advertisers. Couples who have featured in our magazine have also been the subject of online abuse despite their individual beliefs. We’re really saddened by this.

The result has been that a number of advertisers withdrew their sponsorship out of fear of being judged, or in protest. We have had to recognise the reality that White Magazine is no longer economically viable.

Remember when they said redefining marriage would have no negative effect on Christians? This is exactly the sort of thing the “NO” campaign was warning about. It’s bullying. It’s tyranny. And it needs to end before they ruin any more lives by driving people out of business simply because they don’t subscribe to the ideological fad of the day.