The transgender activist who filed multiple Human Rights complaints against several female beauticians after they refused to wax his male genitals is now promoting a “child-friendly” nudist event where minors get free admission.

The “family” event is hosted by an organisation known as “Skinnydipper Recreation Club” (SRC), whose website claims all SRC events are suitable for persons of all ages.

Yaniv tweeted: “This is actually an interesting event.. at the Newton Wave Pool on Saturday. Good job for allowing this @CityofSurrey. Great to see inclusiveness and more inclusiveness on Sunday too! We’re all human.” 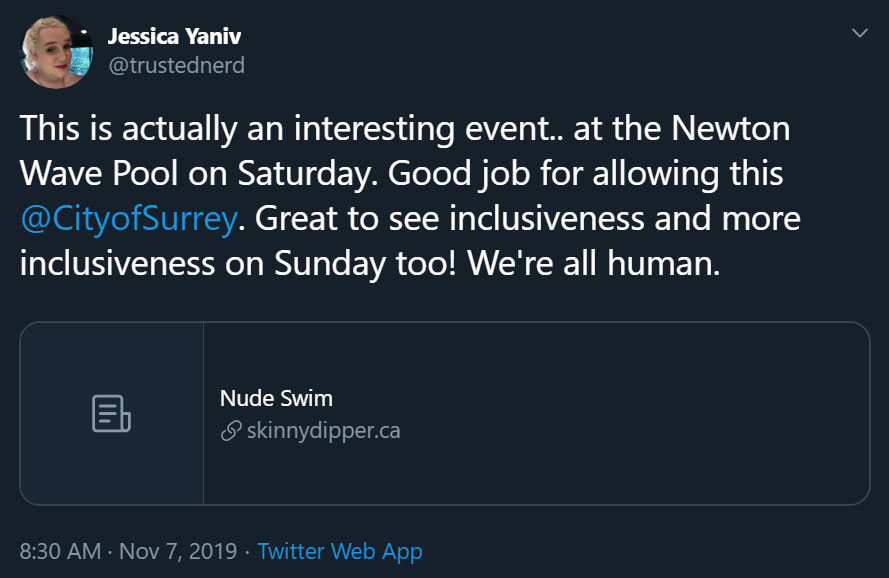 What exactly Yaniv is referring to when he speaks of “inclusiveness” is unclear, whether it’s the city being inclusive of perverts who enjoy exposing themselves to other people, or inclusive of naked children being “recreationally” naked with adults.

Either way, it’s not only frightening that this sort of thing is publicly promoted on social media, what’s worse is that our society has somehow come to tolerate it.

As Joni Eareckson Tada put it: “Though gradually, though no one remembers exactly how it happened, the unthinkable becomes tolerable, and then acceptable, and then legal, and then applaudable.”

If this sort of thing isn’t shut down in its early stages, no doubt, in the name of diversity, we’ll someday be expected to applaud it too.