Prime Minister, Scott Morrison has been physically attacked by a female activist at a campaign event in Albany, (Vic.).

A 25-year-old woman allegedly threw an egg at the Prime Minister’s head, which according to the ABC, did not break on impact. The ABC also reported that Morrison’s assailant, armed with a “carton of eggs was dragged away by security and was now in police custody”.

In the process an elderly woman was knocked off her feet, prompting the Prime Minister to go to her aid.

Morrison later said on Twitter, “My concern about today’s incident in Albury was for the older lady who was knocked off her feet. I helped her up and gave her a hug. Our farmers have to put up with these same idiots who are invading their farms and their homes.”

We will stand up to thuggery whether it’s these cowardly activists who have no respect for anyone, or militant unionists standing over small businesses and their employees on work sites.

Scott Morrison appears to have shrugged off the ambush by keeping to his campaign schedule.

As reported by The Guardian, via AAP, the assailant was protesting the Coalition’s firm commitment to the protection of Australia’s borders, which includes stopping the illegal smuggling of people into the country.

This isn’t the first egg attack on a sitting Prime Minister. Labor Prime Minister, Julia Gillard on her first visit to Western Australia as P.M, was assaulted by a 55-year-old man, who was consequently charged for assault.

As serious as these assaults are, few of them come close to ex-Prime Minister, Tony Abbott, being head-butted by a ‘lone anarchist’ and Same-Sex marriage supporter, during the LNP’s, Gay Marriage popularity survey debate, in 2017.

NSW police officers have collected a poo hidden inside a book that was dumped outside Tony Abbott’s Sydney electorate office.

The faeces was placed inside a hollowed-out book that had the word “Unpopular” written on the cover, according to photos published by News Corp Australia.

Detectives are investigating after the item was left outside Abbott’s Manly office on Tuesday morning, a police spokesman said.

Violence against sitting members of parliament, particularly Conservative and Christian public servants, is becoming a trend. Tony Abbott, being the example par excellence, because he has evidently been singled out as a primary target for Leftist activists; the assault on Scott Morrison providing more evidence which supports that conclusion.

More recently, Fraser Anning, an Australian Senator was ambushed by a 17-year-old Victorian teenager, who smashed an egg into the back of the Senators head during a press conference in March.

At the time many erupted with applause, dismissing the event as a kid letting off some steam. 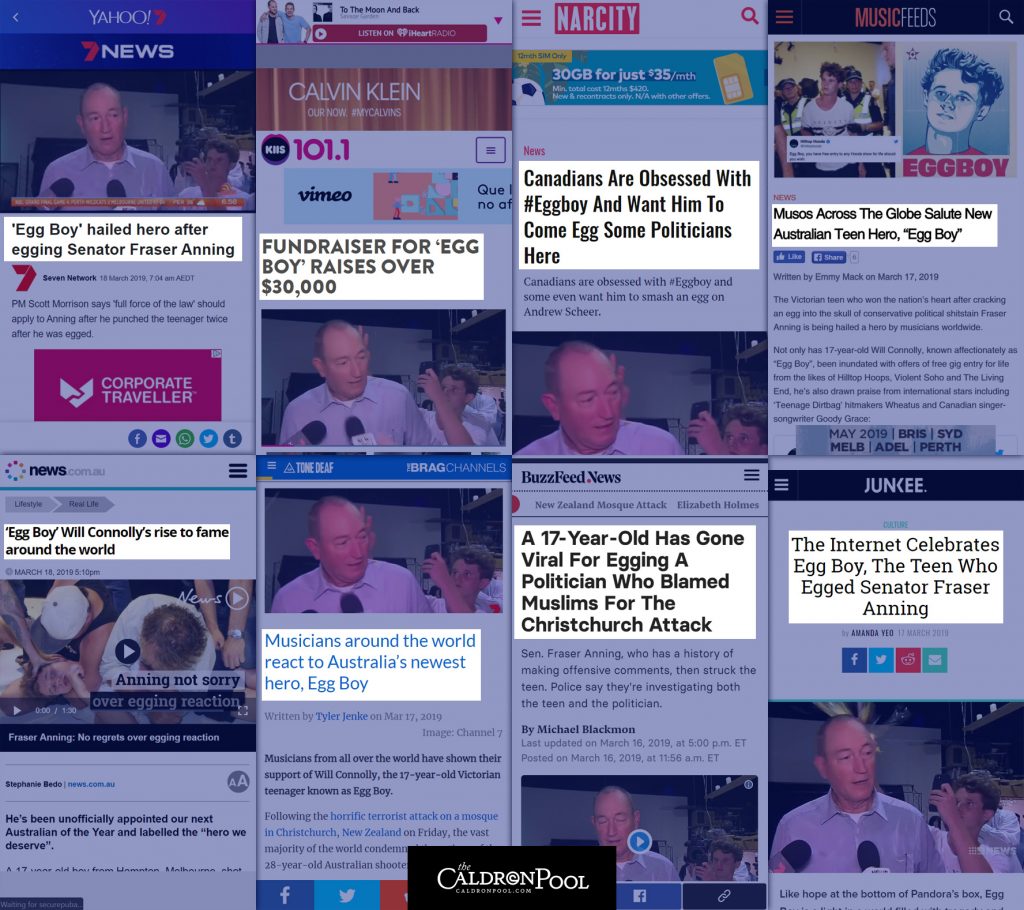 If the assaults are trending, it’s in large part because of the applause on social media. While there are pockets of healthy resistance to this, Big Tech companies are reducing the impact of that healthy resistance, by purging conservatives from their platforms. Ironically giving actual violence a voice, all in the name of fighting what they’ve arbitrarily determined to be “hate speech”.

After the ambush of Fraser Anning, many warned about the precedent it was encouraging. In response, people took to social media and applauded the teenager. With one prominent Church leader saying he wouldn’t condemn the assault on Anning, because “Anning did far worse […] This is a random kid who got the senator dirty with an egg. He should not have done it, but it is a minor, stupid assault.”1

As I said in March, in an article discussing the lynching of Fraser Anning:

We would all do well to keep the words of Dietrich Bonhoeffer in mind, “the ultimate possible rebellion, is that the lie [of the serpent] portrays the truth as a lie. That is the abyss that underlies the lie—that it lives because it poses as the truth and condemns the truth as a lie [and we fall for it].”2

This is the dark precipice we are being guided towards by many of our leaders, including companies who own, control and provide social media platforms. It’s a precipice that few will survive, if the socio-political trends of the past two decades are allowed to continue, unchallenged and uncorrected.

In our own resistance against this, may we ALL be drawn back towards the words of Jesus Christ, as he lowered himself in the defense of a woman facing a Pharisaic death squad, “let he who is without sin, throw the first stone” (John 8:7).