New Zealand is fast becoming one of the most “progressive” left-wing nations in the world, particularly when it comes to LGBTQI and gender related issues. Their most recent pursuit revolves around the white-bearded, red-suited, plump and jolly old man, who in modern folklore delivers presents to children at Christmas time. That’s right, even a fictional character invented to bring joy to children around the globe has been deemed “offensive” in New Zealand.

The Farmers Santa Parade marks the start of the Christmas season and has brought joy to the children of Auckland for eighty four years. For the last five years, Neville Baker, who owns the company My Santa, has been hired by the event organisers to lead the main parade as Santa Claus.

Last week during an interview with New Zealand Media and Entertainment, Baker said that his company, a recruitment and training agency, would not hire women to play Santa Claus as he wanted it to be as “authentic” as possible. In response to Baker’s statement, chairman of the Children’s Christmas Parade Trust, Michael Barnett, told NZME: “We found his comments to be inappropriate and unnecessary and will be not using their services for the parade.”

It was later confirmed that event organisers hired a new Santa Claus from a different company, who was in fact also played by a man.

During an interview on The AM Show, Simon Bridges, the National Party Leader of New Zealand was asked for his position on gender discrimination in not hiring women to play the role of Santa Claus. Bridges told listeners that he was OK with the jobs only being offered to men.

“Mary Poppins is a woman, Santa Claus is a man,” he stated. “That’s how it should be. You guys this morning are telling me that man didn’t walk on the moon, now you’re telling me Santa’s a woman – I just want a few things I can believe in.”

According to the Human Rights Commission, sex is a “prohibited ground of discrimination,” however exceptions can be made for “reasons of authenticity.”

In a touch of luck or sheer coincidence, the same week Bridges made his comment about Mary Poppins and Santa Claus, the Ponsonby Central Mall in Auckland elevated their annual Christmas statue. A project the mall has been working on since August. And would you believe that this year’s statue depicts Santa Claus dressed in fish-net stockings, clutching a bag and umbrella, as a symbol of a non-stereotypical male Santa. 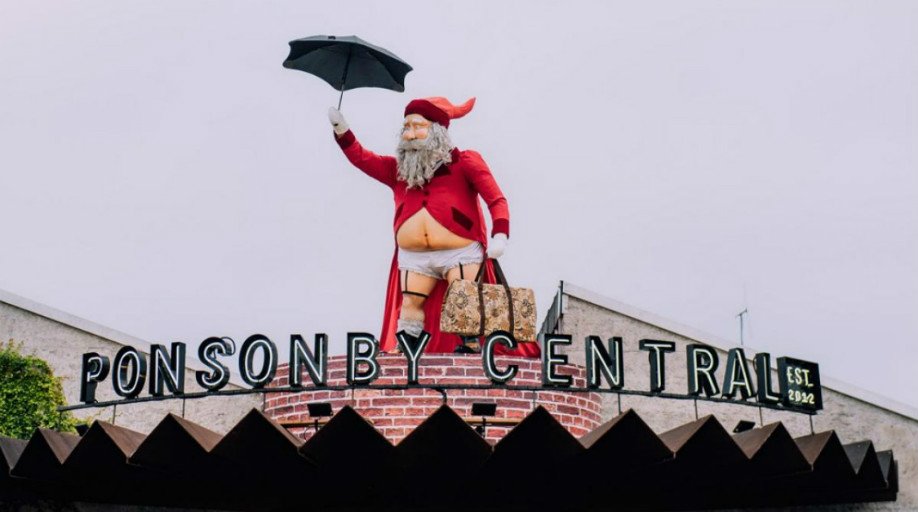 According to the New Zealand Herald the creators of the statue said, the new “Mary Poppins Santa” is intended to put a “fresh perspective on the gender diversity conversation. Our representation of Santa can be Mary Poppins or whatever race/gender/persuasion we prefer and can imagine. The Coca-Cola company doesn’t have a monopoly on what he/she looks like”.

So it looks like this year Santa will be the one receiving coal for Christmas. Dubbed no more as the iconic symbol of joy and hope, but as the symbol of gender discrimination and political correctness.