A Muslim migrant in Limburg, Germany, has brutally executed his wife in broad daylight, hitting her with his car, dragging her 30 meters, and hacking off her head with an ax.

Frankfurter Neue Presse said a 34-year-old man of Tunisian descent was driving a black Audi when he intentionally hit his 31-year-old wife while she was walking on the sidewalk. The woman was then dragged under the car for about 30 metres.

Witnesses claim the man then climbed out of the car, opened the trunk, and pulled out an ax. He then struck the woman five times in the head, effectively decapitating her.

Nearby police arrived quickly at the scene and arrested the attacker who gave himself in without resisting.

According to reports, emergency responders were “shocked” by the gruesome brutality they witnessed when they arrived at the scene.

The horrific incident was captured on video and soon after began to circulate on social media.

German Police responded by tweeting a threat to arrest everyone found to have shared the footage online.

The tweet issued by Westhessen Police reads: “We have evidence that videos of the execution of the crime are circulating on the net. Refrain from further dissemination – we will consistently initiate criminal proceedings against EVERY one who posts / published a video for the display of violence (§ 131 STGB)!” 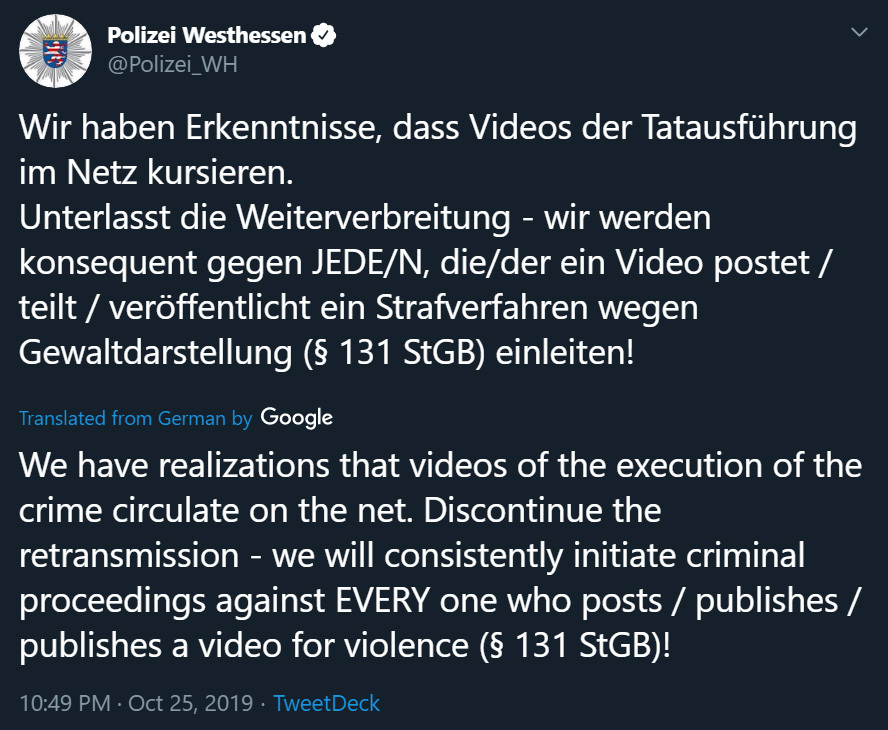 When questioned further, Westhessen Police claimed they were not issuing a threat, but only “drawing attention to the criminal consequences” of sharing the video.

“Yes, I have the Limburg video of the Muslim decapitating his wife in Germany,” columnist Katie Hopkins tweeted. “No, I cannot share it – under threat of arrest. Plus it’s horrific.

“I wish German police would be as aggressive in policing feral humans beheading women as they are of Twitter,” she added.