It’s said that bias isn’t what you put in, it’s what you choose to leave out. Kristina Keneally has demonstrated at best a factual ignorance, and at worst, a deliberate attempt to use US tragedy’s as a means to score political points. In the past week, two mass-shootings, one in Dayton Ohio, the other in El-Paso Texas, rocked the United States.

The Labor Senator and Home Affairs spokeswoman in a Sydney Morning Herald op-ed titled, We can’t bury our heads when it comes to right-wing extremism wrote:

On Sunday a wave of sadness consumed me as I saw Dayton, Ohio – where I attended university and lived for seven years – become the latest site of a mass shooting in the United States. Blocks from my old neighbourhood, nine people had been killed and 27 injured in less than 30 seconds. Hours earlier, 20 people had been killed in El Paso, Texas, with the shooter reportedly inspired by the Christchurch attacks, according to a white nationalist, anti-immigrant manifesto posted online.

She leaves no doubt as to the Ethno-nationalistic, xenophobic motives of the El-Paso shooter. In fact, you could probably guess after reading the opening lines and the Title where the story was going. But it’s helpful to understand why Keneally omits the intentions of the Dayton mass murderer. The perpetrator, 24-year-old Connor Betts, was a fan of Elizabeth Warren,  Antifa, and Socialism. He was clearly mentally unstable, and according to reports, previously written a ‘kill list’ of former classmates. 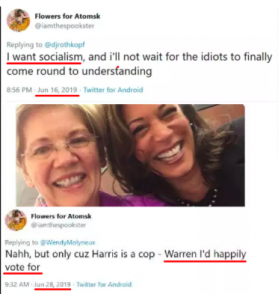 To omit this information is ethically dubious, particularly in the context of ascribing White Nationalism as the raison d’etre of the other massacre. Mainstream media, in general, is willfully ignorant of the intentions behind the politically inconvenient shootings, like that of Republican Stephen Scalise and the Pulse nightclub. Hard Core Bernie supporters and Anti-LGBT radical Islamists don’t fit the narrative.  We can all agree that these are absolute tragic circumstances, & they shouldn’t be used to score political points. However, if for ethical journalism it’s important to disseminate the motives behind one shooting, and draw from it a sweeping conclusion with the potential for substantial legislative action, then it should be equally compelling to do so for all shootings.

It is the ominous backdrop of a public tragedy that is so often used to attack the institution of gun ownership and The Right in general. In Australia, the new favourite whipping post is the Australian Conservative Political Action Conference (CPAC). Keneally landed herself in some hot water last week, accusing ‘Brexit Badboy’ and CPAC speaker Raheem Kassam of ‘vilifying Muslims,’ espousing anti-LGBT views and being deserving of a visa ban.

Doubling down on whipping up CPAC hysteria, knowingly or not, the old favourite of  ‘guilt by association’  channels the isolationist practice of now-deceased community organiser, and subject of Hilary Clinton’s senior thesis, Saul Alinsky. He posted that to inflict maximum damage to an institution, you should freeze and alienate individuals within it. People hurt faster than traditions. Rather than only slamming the second amendment, you attack Kassam and life-long NRA members Matt Schlapp and Dan Schnieder. CPAC becomes radioactive and framed as providing ‘fertile ground for the alt-right to become normalised.’

It’s in this disturbing environment that we have Morrison effectively encouraging further radicalisation by welcoming hate to our shores in the form of CPAC. You don’t prevent violence by providing a platform to those who believe gun ownership is a god-given right.

Cue the scary music. It’s difficult to find a real link between ‘hate’, ‘gun rights,’ and the Right because as statistics demonstrate, a substantial portion of left-leaning Americans also believe in the 2nd amendment. According to a 2018 YouGov poll, only 38% of Democrats (US Equivalent of ALP) want the second amendment repealed. In total, only 21% of American’s are “strongly” or “somewhat” in favour of Second Amendment repeal.

If respect for 2A is somehow a gateway to Richard Spencer and the Alt-Right then the democrats are going to have a difficult time getting any affirmative action past a lot of hateful rank and file members.

Alexander is a recent Sydney University Graduate with a Degree in Finance and Banking, however he has strong interests in history, politics & economics. He hosts a podcast with his two brothers under the name “Carnage House Production.” Currently living in China & studying mandarin, Alexander hopes to contribute to Australian discourse from abroad.