Israel Folau has found himself in hot water again after the rugby star shared a graphic on Instagram paraphrasing a portion of the New Testament.

The image, which has received over 11k likes since it was published yesterday, states: “WARNING: Drunks, homosexuals, adulterers, liars, fornicators, thieves, atheists, idolaters, Hell awaits you. Repent! Only Jesus saves.”

“Those that are living in sin will end up in Hell unless you repent,” Folau added in the caption. “Jesus Christ loves you and is giving you time to turn away from your sin and come to him.” The post ends with citations from Galatians 5:19-21, Acts 2:38, and Acts 17:30. 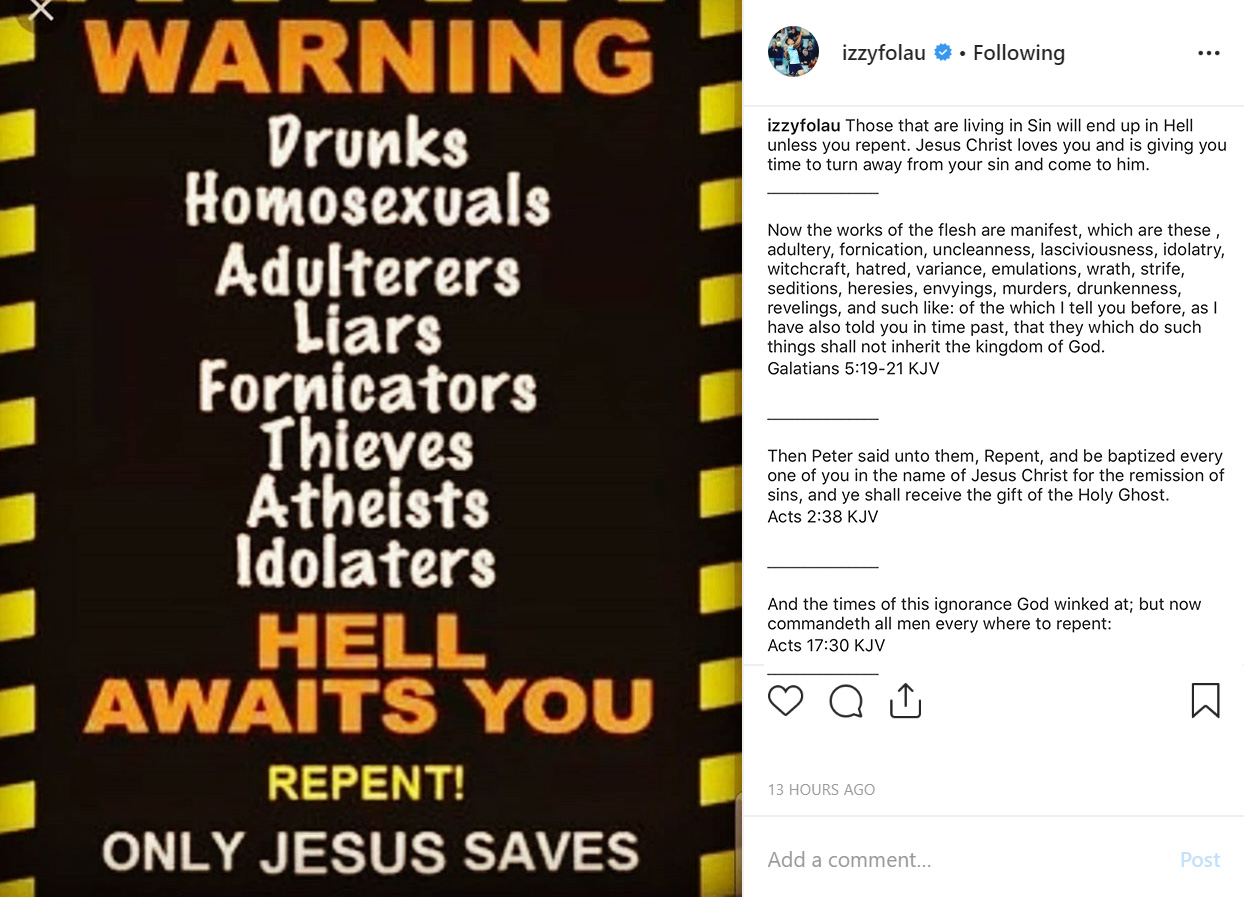 The graphic itself is clearly a paraphrase of the Apostle Paul’s teaching in 1 Corinthians 6:9-10, which states:

In response, Rugby Australia has launched an investigation, with the NSW Waratahs calling the content of Folau’s post “unacceptable”.

“NSWRU and Rugby Australia deem the content within the post as unacceptable. It does not represent the values of the sport and is disrespectful to members of the Rugby community,”  the NSW Waratahs said in a statement.

“The Rugby Australia integrity unit was engaged on the matter last night.”

Peter FitzSimons, the Christophobic commentator over at the Sydney Morning Herald has also renewed his called to have Folau sacked by Rugby Australia.

In a column today, FitzSimons said: “Israel Folau has to go, and will go. Quick. Clean. Gone. At least until such times as he repents.”

Similar calls were made last year after Folau reiterated the biblical view of sexuality and homosexuality on his personal social media accounts.

At the time, FitzSimons responded to Folau by claiming: “The greatest of all rugby values is inclusion. We want everyone on board: white, black, tall, small, fat, thin, abled, disabled, straight, gay, men, women, young, old, etc.”

FitzSimons congratulated himself for being so inclusive, but evidently, his definition extends only to how a person looks, not how they think. It’s becoming clearer every day, if you don’t think the way they do, the tolerance brigade will ridicule and dismiss you, all in the name of inclusion, of course. And that’s exactly what FitzSimons did, not only by mocking Folau, but heaping ridicule on Christians everywhere:

If you say: ‘I seriously believe, as a grown adult, that there is a really good supernatural being, called ‘God’, in a paradise above clouds called ‘heaven’, and a really bad one beneath us, called the ‘Devil’, living in ‘hell’, and though God must have created some beings as being attracted to their own gender, because he created everything, he still so hates his children for having that same-sex attraction, he will send them to hell… we’re meant to back off… Most of us can laugh off such nonsense.

This isn’t the worst of it either. FitzSimons has often mocked Christianity, calling it absurd, brainless, infantile, embarrassing, transparent nonsense, and deserving of simple mockery. In a 2016 piece for the Sydney Morning Herald, FitzSimons summed up the Christian faith and Jesus as:

…that a cosmic Jewish zombie who is his own father can make you live forever if you symbolically eat his flesh and drink his blood, while telepathically telling him that you can accept him as your master, so that he can remove an evil force from your soul which is present in all humanity because a woman made out of one rib bone and a mound of dirt was tricked into eating fruit from a magical tree by a talking snake.

FitzSimons wants Folau banned from the game because he doesn’t agree with what Folau practices. This, to FitzSimons, is a defence of inclusivity. On the other hand, Folau has never called for the exclusion of anyone, not even those who practice things contrary to his beliefs. This, to FitzSimons and the tolerance brigade, is rank intolerance.

The media will continue to act stunned and dumbfounded every time Folau, a professing Christian, cites a standard, historical Christian belief. Not because they haven’t had over 2,000 years to get used to Christianity 101, but because “diversity” and “inclusion” only extends to those who think a certain way, regardless of how tolerant and inclusive they are.

As R.C. Sproul Jr rightly said: “Tolerance was never the goal. Approval is. We who give the former and not the latter will not be tolerated.”