Facebook has pinned a “hoax alert” on articles from Caldron Pool and Daily Wire which mention a priest from the Church of Sweden proclaiming Greta Thunberg the “successor” of Jesus Christ.

The “fake news” alert appears beneath the articles when shared on Facebook and claim the stories are “misleading” their readers.

In the response-piece, the fact-checker attempts to make his case by re-stating facts already mentioned in both articles, as though the original pieces were not upfront about when the tweet was posted and by whom.

“A single tweet by a local pastor in December 2018 made the controversial claim but he later apologised for it,” the fact-checker said.

The fact-checker then directs his readers to an internet archive page to view the original tweet. Only, the tweet was never deleted, the priest never really apologised for it, and the church never distanced themselves from the “announcement” issued by a church representative, despite the tweet attracting worldwide attention.

The supposed apology, which is included in the counter-piece, does not mention the tweet or retract anything that was said. The church simply apologised if it “hurt” some people.

“Dear twitter, If we hurt someone we apologize, it has never been our meaning. Our meaning has been to talk about Jesus Christ in our own way…” the church tweeted.

The fact-checker seemingly attempts to downplay the priest’s role in the Church, referring to him as a “local pastor” or a church in a small town, but then goes on to admit the church is actually part of the “Church of Sweden.”

It’s then pointed out that the priest who sent the tweet is no longer on staff at the church. That is true. But this would be dishonest if the fact-checker is implying the priest is no longer an employed leader within the Church of Sweden. A quick search of their website reveals the priest is still acting as a representative of the church as a hospital priest.

As the fact-checker admits, “The Church of Sweden… has issued no official statement about this matter.” Which is entirely the point. A leader and representative of the Church of Sweden proclaimed Greta Thunberg Christ’s successor and the entire denomination remains silent.

Is this Facebook simply using their “hoax alerts” to tag legitimate content as fake news? Not that anyone would take them seriously. I mean, they’re literally FACT CHECKING memes: 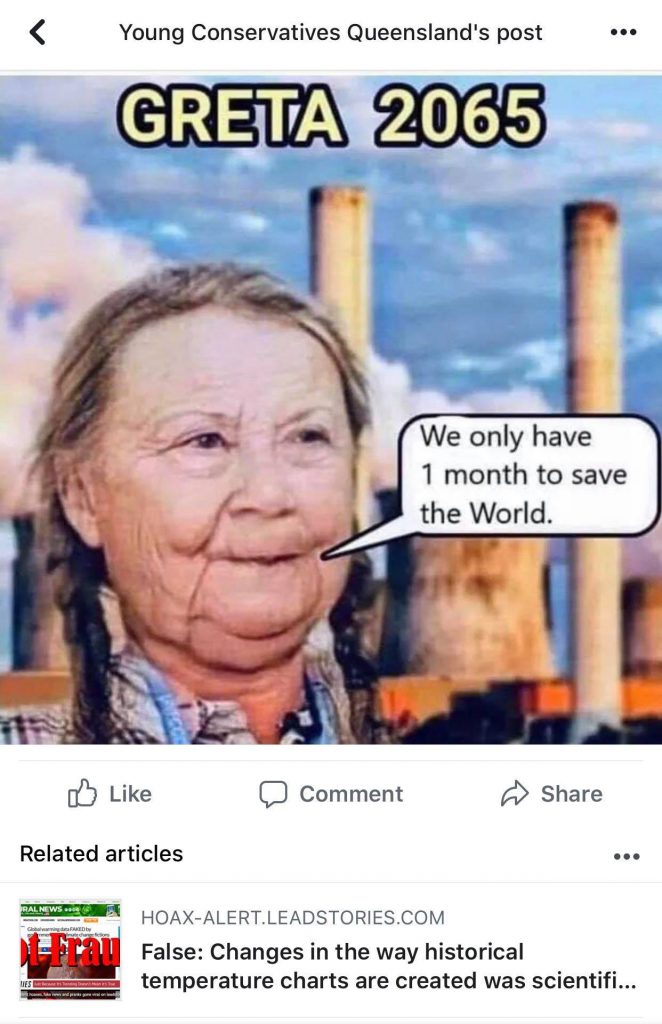