All my kids have gone through the public education system, until now. I had some concerns about the education one of my kids was receiving a year or two ago and after interviewing with the head of senior students, he decided there was nothing the school could do to help. He advised me to vote for a political party which would put more funding into education if I found the system lacking.

As a kindness and somewhat taken aback at both his brazen politicking and facile grasp on education policy I offered to not fully engage his assertion. However, I was not so noble as to not sum up his silliness with the observation, “I don’t believe you can fix a broken system by making it bigger.”

Of course, I was right.

Keep reading, as I also have the solutions, dramatic as they may be, but nonetheless more demanding of “real action” by virtue of this emergency being more real than the “emergency” our students are being encouraged to be concerned about by sycophantic teachers, administrators, activists, politicians and the leftist media complex.

First, the evidence of the real emergency our students are facing.

Since the turn of the century, there has been a decline in our academic performance. The Program for International Student Assessment (PISA) measures 15-year-olds’ ability to use literacy, numeracy and science knowledge and skills to meet real-life challenges. In all three we have been trending down since 2000. 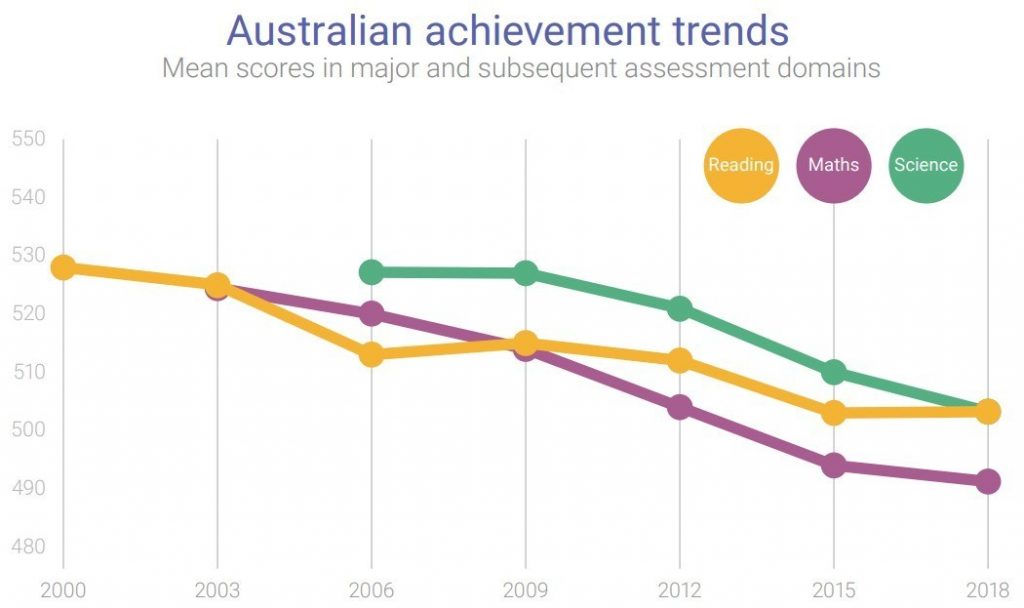 Suggestions that pouring more and more tax-payers’ money into education will magically fix education systems are not borne out by the evidence. The nation of Estonia leads the world in literacy and science outcomes, yet they only spend half of what Australia spends per student. The near-religious fervour with which Labor and Unions (but I repeat myself) insist that more money will solve everything is ham-fisted, designed to emotionally manipulate gullible voters who feel more than they think into giving power to people without real solutions.

Some experts may disagree, but the same “experts” and their type of thinking got us into this mess. Clearly an entirely new approach is needed.

Federalism is the model which constitutes our nation, despite the best efforts of the Federal Government to seize more power for itself at every opportunity with the cooperation of the State Governments in recent decades. When the States have resisted, the High Court has creatively ignored the principles of federalism founding our nation and sided with the Commonwealth, turning us ever so consistently into a centralised, homogenised system with bureaucratic waste and inefficiency. Redundant federal departments for education and health create duplicate buildings, administrators and funding burdens without creating anything we didn’t already have and, clearly, without making anything better.

The true power of federalism for creating a more prosperous, successful and content nation lies in the ability for six states and two territories to each design the best systems and policies they can and then compete and compare outcomes. Where outcomes are clearly inferior, informed adjustments can be made. Where differences exist merely on a philosophical or ideological level, federalism as originally intended allows citizens of the Commonwealth to migrate to where the systems and policies on offer better align with their own preferences and values, creating more opportunity for more people to be happy with their government.

The national curriculum experiment has completely failed, so it and the federal Education Department and Ministry must go. Let the states be what they were intended to be: sovereign and competitive.

The other dogmatic approach which needs to happen urgently to begin to create opportunities for solutions to Australia’s education emergency (or if you prefer, “crisis”), is funding freedom. Instead of funding schools directly and empowering them to pursue flights of fantasy with indulgent experiments in education, parents must be given the funding to be spent on approved education resources at their discretion.

This doesn’t mean an “educational” family excursion to the Caribbean or big-screen TVs in every room, but complete portability of funding to education providers which are delivering the outcomes the parents decide are best for their children. A competitive marketplace always delivers the best outcomes for consumers, who in this case are students.

Ending the emotional and partisan war between public and non-government schools lets the tax-payers decide where they get the best value for their money. Some public schools will get much more revenue as they succeed in helping students succeed, and those who see an exodus of students will be forced to find improvements through imitation and efficiency or close. If we are serious about improving education outcomes we have to be prepared to prune the branches which yield bad or no fruit.

It is only fair that every student in Australia gets equal help from the government to achieve an education equipping them to be a functional member of society. We’ve already established that more funding doesn’t automatically result in better education outcomes, so the petty jealousy of students whose family may be able to further subsidise their education by a non-government provider is purely emotional and not at all rational. Competition will raise the water level for all, lifting those who can deliver what they’re paid to, and sinking those that won’t.

The greatest resistance to the idea of education vouchers will come from those who realise such a return of power to parents (where it belongs) will also empower them to choose what values and political indoctrination their child receives. While many schools sprinkling climate, sexual and gender theories throughout their curricula will be sought out by some, many which do not will not only survive but thrive and produce superior education outcomes. This reality is a grave threat to the anointed elites’ agenda to implement their radical vision of society, one which they will never admit.

The evidence is that Australia is facing an education emergency with no real solution offered. More of the same will yield more of the substandard same. To arrest the decline and fix the problem of a centralised, homogenised system, competition between states must be restored by returning power to the state education departments, and competition in the marketplace of education providers must be created by returning power to the parents.