Australia’s ASIO security chief, Mike Burgess presented the Director-General’s Annual Threat Assessment on Monday. The assessment laid out ASIO’s “principle concerns” about national security, and the issues it views as threats to Australians both internally and externally.

Burgess didn’t mess around, stating from the start that he wanted “to move beyond the bureaucratic language of annual reports and help everyone understand the significant threats we see directed at Australia and Australians.”

The director spoke pointedly about the increasing challenges technology posed to the organization’s ability to do what it does successfully. Adding that ASIO seeks to find a balance between the “need for new powers and privacy”, and how new laws have allowed ASIO to effectively keep up with these challenges, giving ASIO a sharper edge and ability to respond to these challenges with “energy and purpose.”

Burgess reminded Australians that ASIO’s “number one mission is to protect Australians from threats to their lives”, saying that the “terrorist threat remains PROBABLE [sic.]; and that it will remain unacceptably high for the foreseeable future.” The ASIO Director made it clear terrorist elements are still “plotting to harm Australians; some occurring in small cells.”

Burgess noted that equally concerning is “the ease with which terrorists continue to use the internet to spread hateful messages, radicalize people to their cause and provide how-to-advice on committing atrocities against Australians.” He followed this up by stating that he finds the “streams of hate spread across the internet by extremists of every ideology” particularly troubling, where “extremists are trying to recruit children as young as 13 or 14.” He then added that “violent Islamic extremism, e.g.: the type embodied by Islamic State and al’Qaida”  et.al. “remain ASIO’s principal concern.”

Burgess’ assessment wasn’t sugar-coated, he pointed out that “there are now more Islamic extremists from more countries active in more places than ever before.” He then spoke on what he called “other operators entering the “terrorism arena”, stating that the Christchurch shooting “had brought right-wing extremism into sharp focus.” He labelled this “extreme right-wing threat real”, saying that it was on the rise in suburbs where small cells meet to salute Nazi flags inspect weapons, train in combat and share hateful ideology.

While acknowledging the “low capability” of any extreme right-wing terrorist attack, Burgess didn’t rule out the possibility of more “sophisticated attacks.” Building on this he discussed the issue of “state-sponsored terrorism”, espionage, foreign interference, and the threat posed by extremists who are being released from prison. According to Burgess, “foreign espionage and interference activities are higher now than it was at the height of the cold war.”

In his address, the ASIO director mentioned that the organization has “uncovered cases where foreign spies have travelled to Australia with the intention of setting up sophisticated hacking infrastructure targeting computers containing sensitive and classified information.” Burgess also stated that “we’ve seen visiting scientists and academics ingratiating themselves into university life with the aim of conducting clandestine intelligence collection” – adding that “this strikes at the very heart of our notions of free and fair academic exchange.”

Media responses to the threat assessment have been varied.

The Australian highlighted chief points made by the ASIO security director. Its headline read: ‘Spy Boss Comes out of the Shadows.’ The article summed up “Mr. Burgess’ threat stock-take, and acknowledged how the ASIO director didn’t flinch in calling out Islamic extremism, as being the No.1 concern; that the threat of espionage was far and away the most serious issue going forward.” The article drew from The Australian’s Greg Sheridan who “argued on Tuesday that ASIO’s assessment showed “those folks who say that Chinese government is being demonized in Australian security discussions are simply refusing to face reality.”

The ABC went an entirely different route. Taking the opportunity to deflect the heat away from Muslims and the Chinese, the ABC appeared to launch an opportunistic and subtle attack on anything and everything right-wing, the 1 billion dollars tax-payer funded organization choosing to run with the headline: ‘Neo-Nazis among Australia’s most challenging security threats, ASIO Boss Mike Burgess warns.’

While the ABC was generous enough to note Burgess’ comments about ASIO’s “principle concerns”, adding a brief mention of Islamic Terrorism, and tacking a note on at the end, acknowledging China as the “main culprit”, the tax-payer funded behemoth chose instead to focus its attention on the small fish. This is despite the ASIO Director having very clearly stated that ASIO’s “principle concerns” are related to Islamic Terrorism, and foreign interference, not just externally, but within Australia, particularly Australian Universities.

Greens senator, Mehreen Faruqi appeared to do the same. Faruqi selectively responded on Twitter to comments from Home Affairs Minister, Peter Dutton, who answered a reporter’s question about neo-Nazism, saying:

If somebody is going to cause harm to Australians, I just don’t care whether they’re on the far right, far left, somewhere in between, they will be dealt with…and if the proliferation of information into the hands of rightwing lunatics or leftwing lunatics is leading to a threat in our country, then my responsibility is to make sure our agencies are dealing with it and they are.

The Greens senator seemed to deliberately misconstrue Dutton’s comments, in what could rightly be viewed as an attempt to tar and feather the Minister as a right-wing extremist.

“Peter Dutton’s response to this has absolutely terrified me and other Muslims in Australia,” Faruqi tweeted. “He’s the Minister responsible for ASIO and responding to right-wing extremism but has said ‘I just don’t care honestly’.” 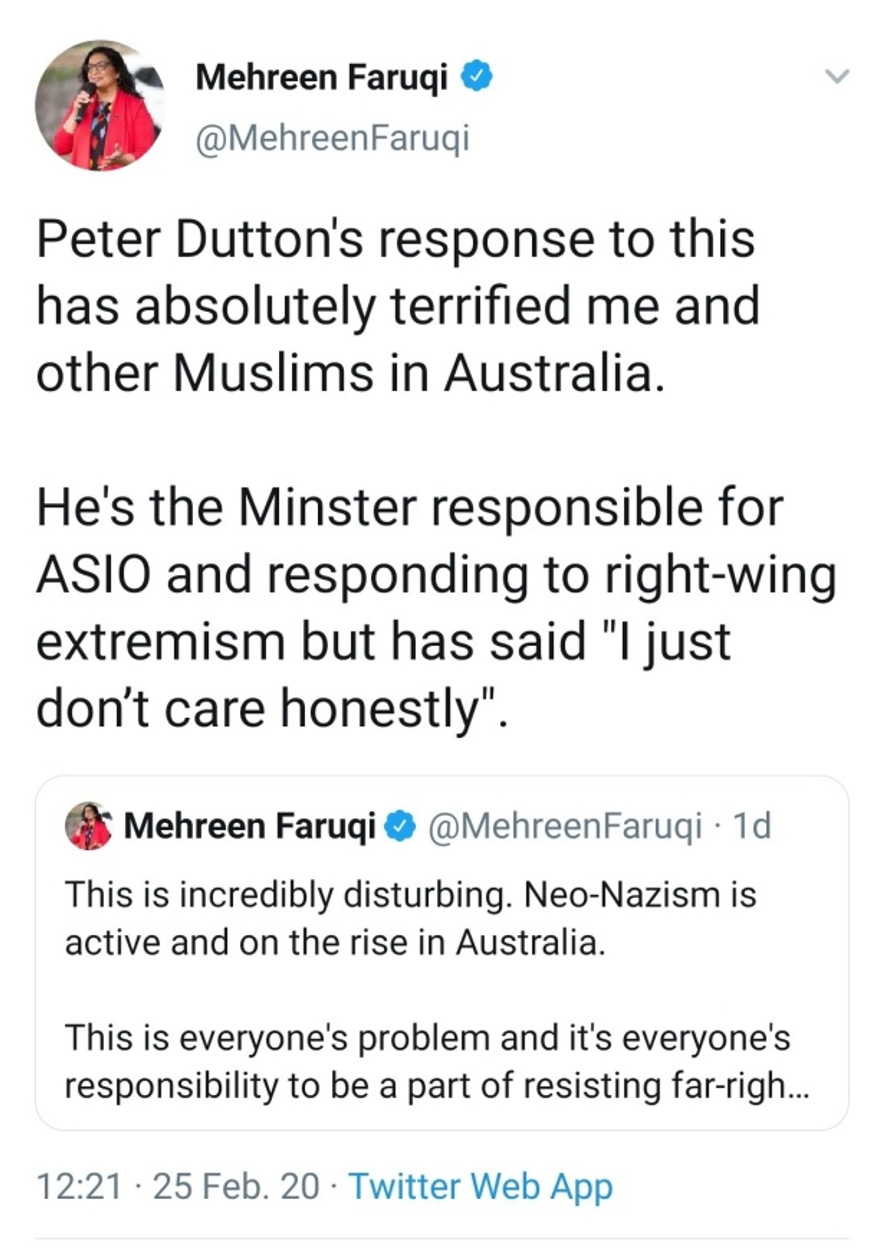 By 9:28 pm on the same day the Greens Senator had deleted her comments, and posted this apology:

“Earlier today I tweeted that Peter Dutton had said, in answer to a question from a journalist regarding the rising threat of right wing extremism in Australia, that he ‘doesn’t care honestly’. I retract any suggestion that Mr Dutton does not care about the threat of neo-Nazism in Australia, and I apologise to him unreservedly. As soon as Mr Dutton raised this concern with me, I deleted my tweet.

“I remain of the view that Mr Dutton has a track record of making a false equivalence between right-wing extremism and left-wing activism, as well as consistently demonising Muslim Australians. I also remain of the view that Mr Dutton as Home Affairs Minister has contributed to the rise of hate speech and race-based division in our society through his statements and actions. However, my tweet went too far and my apology for that is sincere.” 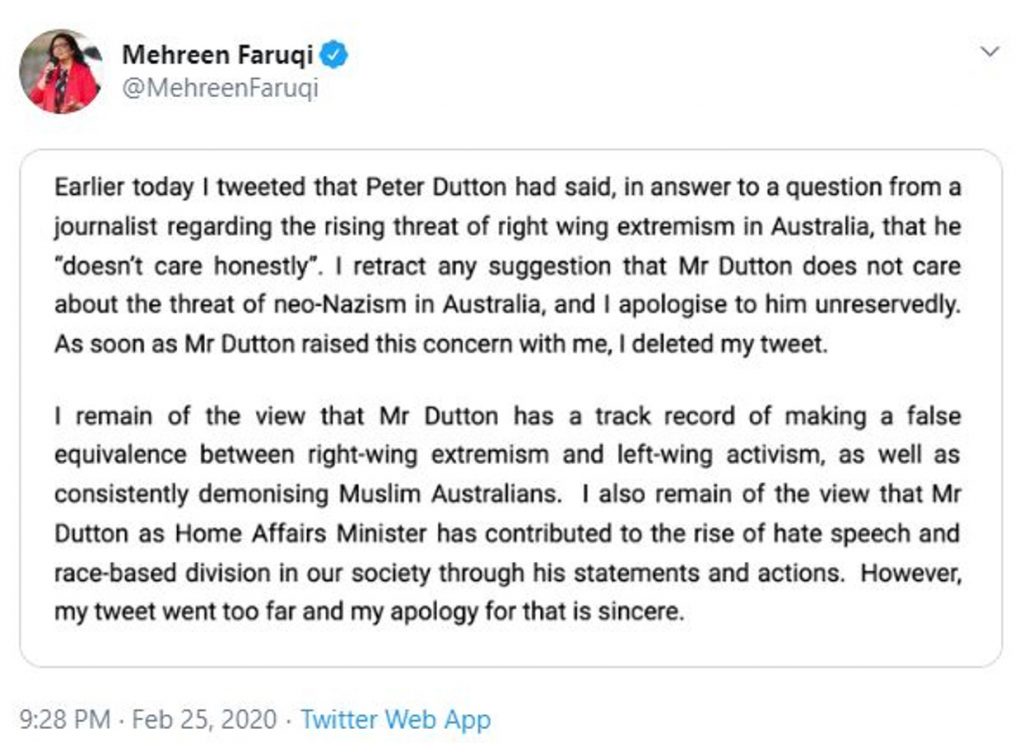 Burgess’ delivery of the Director-General’s Annual Threat Assessment was straight to the point. The Home Affairs Ministers and ASIO security chief didn’t play with semantics, seek to placate dishonest critics, or use the assessment as a political football. They called a spade a spade. It was impossible to misunderstand him, or Peter Dutton. In not passing on that information to the Australian public correctly, and in its proper context, the ABC and Greens Senator Faruqi have placed their own self-righteous, ideological, political posturing over against the safety of the Australian public they are funded by tax-payers to serve.