There’d be calls to have the television network immediately shut down. Any organisation or corporation that sponsored or advertised on the network would be shamed into publicly renouncing their affiliation. Australians would demand a proper investigation as politician after politician would come out condemning the broadcast with the harshest language possible. And rightly so.

In an early November episode of the ABC’s Q&A, indigenous writer and activist Nayuka Gorrie said:

When you say violence begets violence, it’s almost sounding like it’s a level playing field which it’s not. It’s absolutely not … I wonder what our kind of tipping point in Australia’s going to be when people will start burning stuff? I look forward to it.

We’ve tried for 230-plus years to appeal to the colonisers’ morality, which just doesn’t seem to exist. I think violence is OK because if someone is trying to kill you, there’s no amount of, ‘But I’m really clever. I’m really articulate’. No amount of that is going to save you. Let’s burn stuff.

Last week, Gorrie “clarified” her position, before setting her account to private, tweeting: “To clarify my position: burn cop cars not country you dumb c*nts” 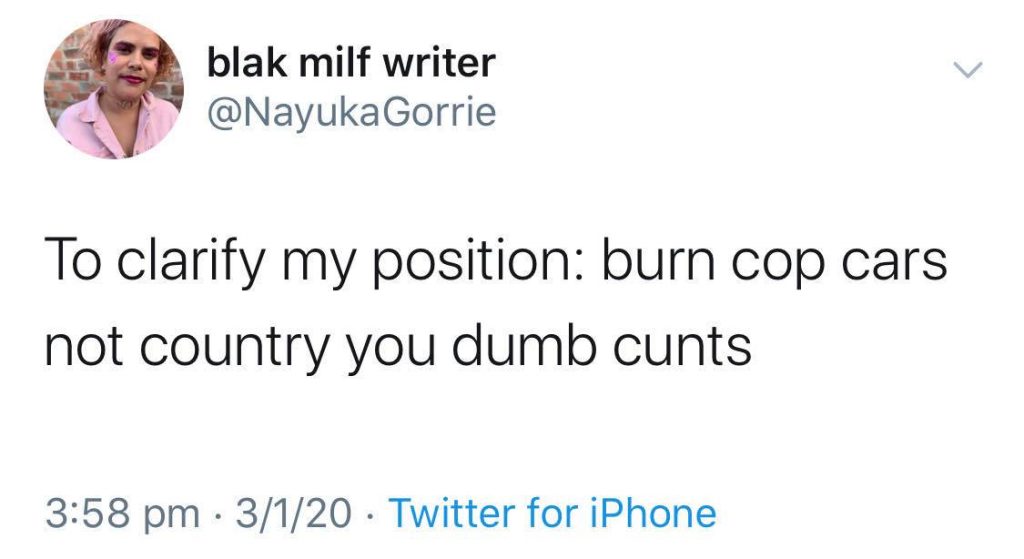 The bushfires in Australia have so far burned more than 12 million acres and resulted in the deaths of at least 18 people. Nine News estimates that 480 million animals have been killed in the NSW bushfires so far.

The ABC has reportedly pulled the episode from all its platforms.