Victoria’s Secret has probably picked the worst time to have their fashion show, corresponding with Trans Awareness Week which is typically observed the second week of November.

In a recent post-event interview with Vogue, the lingerie line’s Chief Marketing Officer, Ed Razek was asked if he would include transgenders in the fashion show.

“No. No, I don’t think we should,” Razek responded. “The show is fantasy. It’s a 42-minute entertainment special. That’s what it is.”

“It is the only one of its kind in the world, and any other fashion brand in the world would take it in a minute, including the competitors that are carping at us. And they carp at us because we’re the leader,” he said.

What Razek probably wasn’t expecting was the social media fallout that would follow. Many members of the trans community rallied their supporters to boycott the brand and “cut the wings off” the event.

Transgender model Munroe Bergdorf tweeted, “The FULL FANTASY can always be sold, regardless of a woman’s gender identity, size or shape. I guess now we know what Victoria’s secret is.

She’s actually a douchy cis white guy with outdated opinions on what makes a woman sexy. #edrazek @VictoriasSecret you’ve been exposed,” she added. 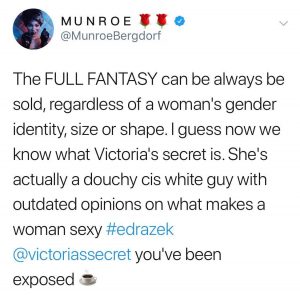 Following the backlash Victoria’s Secret released an official apology by Razek, backtracking on his initial remarks.

“My remark regarding the inclusion of transgender models in the Victoria’s Secret Fashion Show came across as insensitive. I apologize,” Razek said.

“To be clear, we absolutely would cast a transgender model for the show. We’ve had transgender models come to castings… And like many others, they didn’t make it… But it was never about gender. I admire and respect their journey to embrace who they really are,” he went on to say.

One wonders if Victoria’s Secret know their target audience at all.