An event featuring US academic and pediatrician Quentin Van Meter has been cancelled by the University of Western Australia due to safety concerns. The decision comes after the UWA’s social media pages were inundated with protests and petitions calling for the event to be cancelled. 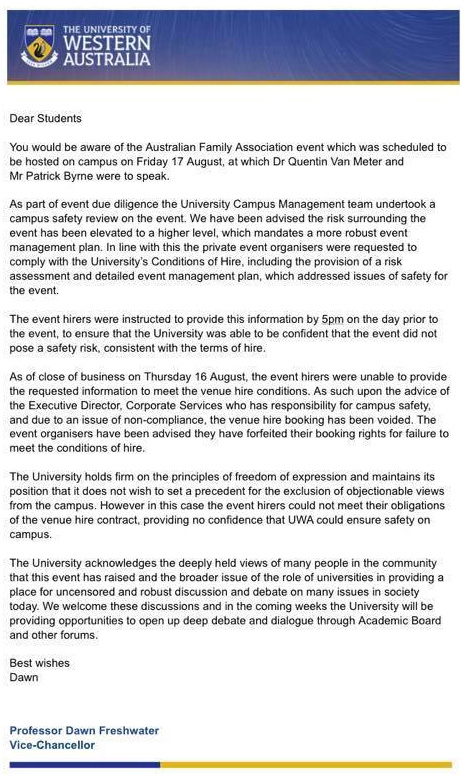 Dr Van Meter, president of the American College of Pediatricians, eminent doctor and academic with over 38 years of clinical experience, has gathered opposition lately for suggesting the transgender movement is based more on ideology than science.

An unidentified source said, of about 200 tickets sold online, half are unidentifiable. “From Tuesday, ticket sales jumped within 48 hours by 100 tickets. A few have been identified as previous ruckus makers.”

A spokesperson from the National Civic Council said, “If they had been open to free speech and dialogue, they would have discovered a compassionate and qualified man acknowledging the dignity of every human person especially transgender patients with whom he has treated and not abandoned like others have.”

“It is appropriate for a publicly funded university to host this event where tax payer funded sex-change surgeries is a federal election issue.

“It is in the public interest to openly discuss the impact of an increasing diagnosis of gender dysphoria in the community especially impacting children and to hear from experts rather than student activists.

“Perhaps public institutions should have heard the other side of the story long before they were bullied into implementing policies they don’t fully understand the implications of.

“This may be a sad day for universities and free speech in Australia but we are happy to report the event will go ahead regardless,” the spokesperson said.