A long-time Pellowe Talk Partner messaged me about a week ago to ask, “What do you make of all this hysteria now enveloping the Anglican Church?” Accompanying that question he sent a PDF statement by the Anglican Church of Australia’s “Public Affairs Commission” endorsing the call for a National Day of Climate Action and encouraging Anglicans to participate.

The second paragraph explained, “The Marks of Mission of the Anglican Church commit the Church to striving to safeguard the integrity of creation, and to sustaining and renewing the life of the earth.” This is Biblical. In the first chapter of the Bible God commissions humanity to, “Be fruitful and multiply; fill the earth and subdue it; have dominion over the fish of the sea, over the birds of the air, and over every living thing that moves on the earth.”

Throughout the Bible, the reader can see a consistent theme of God’s people having responsibility for caring for God’s creation. It is for our enjoyment and consumption but must be wisely managed for future generations, not vandalised. Indeed, sustainability is a suitable word for the kind of stewardship we are charged with.

This commission to humanity is recommissioned after the global flood event through instructions to Noah in Genesis chapter 9, with a bonus I personally enjoy. Again, God says, “Be fruitful and multiply, and fill the earth.” He added, “Every moving thing that lives shall be food for you. I have given you all things, even as the green herbs.” Awesome. I’ll have my steak cooked to rare, thank you.

A limited view of stewardship

The PDF statement, however, went well beyond Biblical authority, and that is unwise for a pastor, priest or denominational pulpit to do. It then ventured well into the realm of partisan opinion with no Biblical basis, and asserted, “Climate Change is a significant threat to our planet and its inhabitants.”

Now the hard of the heart may have just dismissed me as a “climate change denier”, but that’s a lie. For the record, I admit the climate is changing, so call me something accurate instead.

To say the changing climate presents an existential threat to the future of humanity and creation is absurd alarmism, and again, well beyond their spiritual authority. The undeniable fact is the global climate is always changing, and the earth has been both much cooler and much warmer in centuries and millennia gone by.

Around the time of Jesus, from 250 BC to AD 400, was a period of climate conditions which have been called the Roman Warm Period, also known as the Roman Climatic Optimum. Optimum. In those days, England had a wine industry and Greenland, now covered in ice, had grain farms. There was another warming period lasting from AD 950 to 1250 with similar levels to the early to mid-1900s.

But go further back in history, and it’s believed the Australian Aboriginals settled Tasmania around 6000 BC after walking there from Victoria across what was then dry land. Sea levels subsequently rose hundreds of metres in the following millennia, eventually cutting off the old peninsula and everyone living on it.

When the planet gets warmer it yields more food. Dr Peter Ridd explains that many of the exact same species of coral which form the Great Barrier Reef grow bigger and better in the waters around Papua New Guinea and Thailand, closer to the equator, and several degrees warmer. When sea levels rise, populations with waterfront homes have to relocate. This is inconvenient and disruptive, but it is nothing new in human history, and it certainly is not “a significant threat to our planet and its inhabitants.”

Calling on politicians to “act” because of climate change misses the theological mark even further by suggesting there is no Biblical or logical case to not act or to moderate the actions taken. Asserting a scientific consensus is absurd given the level of credible, qualified dissent among scientists. Merely dismissing the extant criticism is intellectually dishonest.

The actions most often demanded are devastating to those the Bible commands we seek justice for, the poor and oppressed. Both in Australia and in developing nations abroad, the poor are much less likely to prosper in health and employment where electricity is not affordable. I’ll spare you all the Scriptures about caring for the poor and assume you accept the Bible preaches that more than it preaches environmentalism.

At the very least, there are Biblical principles which either side of the Climate Change debate can appeal to do and be guided by, and to ignore the other in our own conversation is lacking the requisite humility. Even worse, to assume our debate opponents are bad Christians because they don’t agree with our conclusions on a contested issue the Bible is not authoritative on is arrogant.

Let’s not get hysterical. There were no coal mines or combustion engines in 6000 BC, the Roman Warm Period or Medieval Warm Period. Stewardship requires not only to care for the environment but also the economic conditions which other people exist in. At any cost is an attitude which presents far more clear and present danger to the poor and vulnerable than climate change with questionable causes.

Here’s the bottom line when you’re representing the authority of Scripture: don’t pretend there’s no debate when God’s Word is not authoritative on it. There’s no debate on issues like murder or marriage, no ambiguity in the application of what the Bible teaches about life and sexuality. But when it comes to issues like a government (not personal) policy on immigration and environment, there is plenty of scope within Scripture for debating the wisdom of either broad position. 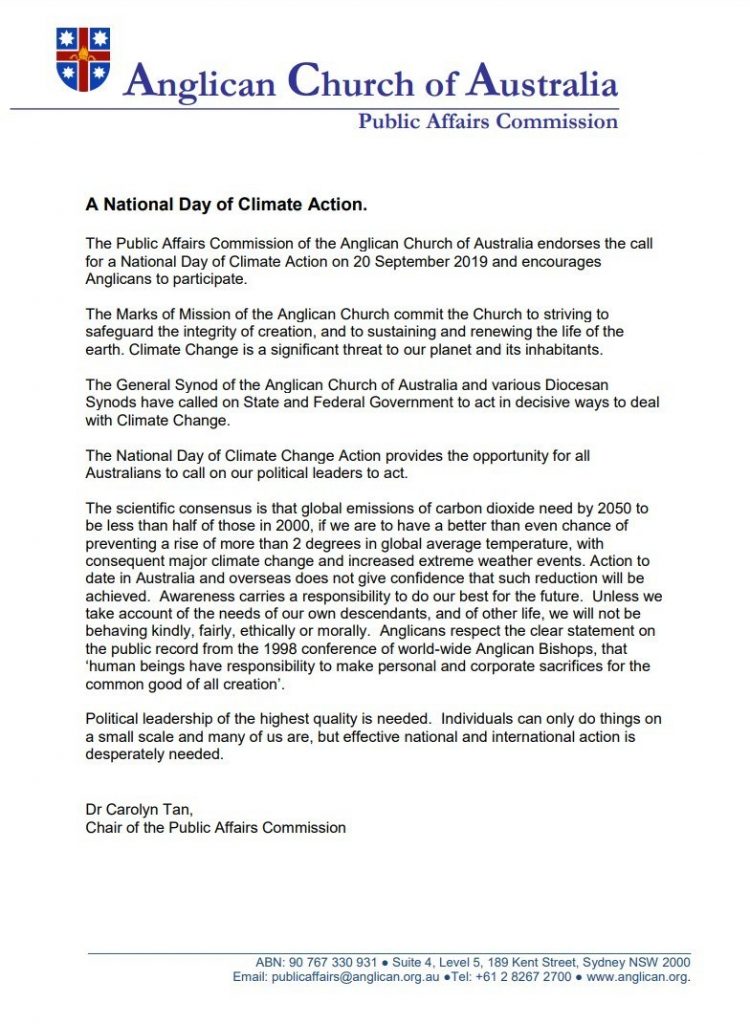 And then we have the heretics at New York’s Union Theological Seminary who this week confessed their sins to pot plants under the guidance of their Associate Professor of Worship. If you think that’s bizarre, wait until you read their statement defending this animism idolatry.

There’s a heresy called bibliolatry. It’s when someone worships a book or the description of a deity in the book. Talk about missing the forest for the trees! Instead of worshiping the God Who speaks, they worship the paper and ink His Word is printed on.

It’s the same with Creation. Worship the Creator, not the things He created.

The “seminary” wanted to teach how to respond to extractivism, which is using the earth’s resources for human purposes (kind of like the Eden mandate with added leftist guilt). So In worship, they confessed the harm they have done to plants, speaking directly in repentance.

Their premise again was that climate change is an emergency, and that arrogant humanity was the cause. According to UTS, created plants and animals are worthy of honour and thanks – in their worship. Calling for new theology, they even called Christian dominion theology “deplorable”. Hilarious – or should I say, “Hillary-ous”?

They compared asking plants for forgiveness to the students apologising to each other, described plants as “created beings” and asked, “Because plants aren’t capable of verbal response, does that mean we shouldn’t engage with them?”

Yes, you space cadets. That’s precisely what it means. Plants are not made in the image of God, not equal to even your students, and certainly not “beings” with emotions or intellect.

Union Theological Seminary’s website reveals a theology so liberal I’m sure Satan could graduate or even lecture. He quoted Scripture to Jesus and also believes the One true God exists. So? That obviously doesn’t make him or anyone a disciple of Christ. UTS feels called to train “people of all faiths and none, who are called to the work of social justice…” Their website also says, “Union’s interreligious engagement programs in Buddhism and Islam expand seminary offerings…”

It’s almost as if Paul’s letter to the church in Rome was written about them specifically!

“[22] Professing to be wise, they became fools, [25] who exchanged the truth of God for the lie, and worshiped and served the creature rather than the Creator, who is blessed forever. Amen (Romans 1:22, 25).”

Be balanced in your Christianity, devoted to God’s Word, concerned for our neighbours, not given to extremes or absolutes unless explicitly imitating Christ’s concern for Truth, justice, peace and liberty.

There is an inherent danger of wandering (or marching) beyond Biblical authority when preaching absolute positions on environmental policy. Worse, new theologies which conscript convenient aspects of Christianity and delete inconvenient doctrines are simply old fashioned heresy.