If you have an issue with the Sydney Gay and Lesbian Mardi Gras, you’re a radical extremist, according to the hosts of Channel Ten’s morning television chat show Studio10.

In a 6-minute segment uploaded to social media on Thursday, the show’s presenters claimed they were “surprised” not everyone liked the program’s rainbow-themed advertisement promoting this year’s Sydney Gay and Lesbian Mardi Gras (SGLMG).

Sarah Harris, one of the show’s hosts, claimed the short cringeworthy promo received reactions that were “hateful”, “bigoted” and “just plain mean.”

“We were pretty surprised actually, by the reactions that it provoked in some of you,” Harris said. “Some was good, some was bad, some were just hateful.”

After Kerri Anne Kennerly, one of the show’s presenters, asked if any of the hateful commenters had a photograph, the program aired the full names and profile pictures of several people who had expressed negative feedback.

“Nup, sorry, not interested,” one commenter wrote. “Stop shoving it down our throats.”

Another said, “Yup, want equality but shove it down peoples throats.” And, “When it comes to them, out of sight out of mind, for the alphabet crew.”

They are relatively tame reactions, but of course, the show’s hosts mocked the comments, before applauding a more affirming reaction which suggested people “grow up” because “celebrating sexuality… is love”.

We welcome robust and informative debates at #Studio10 but won’t stand for intolerance and abuse.

If you make a nasty, hateful and personal attack on our Pages – you will be blocked.

Mardi Gras is a time to celebrate inclusivity and love. Be kind toward one another. 🏳️‍🌈 pic.twitter.com/NmRMKA2QYK

Lesbian co-host Narelda Jacobs said the disapproving comments made her sad, but they didn’t surprise her because it’s what most LGBTQ people deal with, especially from religious people.

“It’s what every member of the LGBTIQA+ community faces when they come out. To their family, to their community, to their sports team, particularly when there’s religion involved,” Jacobs said.

Jacobs went on to describe the SGLMG as a time for celebration, saying she hopes in the next year or two the event will be celebrating the overturning of the “Religious Discrimination Bill.”

“[It] so needs to be kicked in the guts because it’s fuelling attacks like the ones that we’ve seen on our Facebook page. And it’s just got to go. There’s no reason for it and it’s got to go,” she said.

After at least four times claiming the LGBTQ community is a “marginalised group” in society, Joe Hildebrand, another presenter on the panel, contradicted Jacob’s point by suggesting those who have an issue with SGLMG are the ones on the fringe.

“These people [opposed to SGLMG] are the ones in the margins,” he said. “You’re the extremist. Donald Trump just appointed a gay person to his cabinet. So, if you’ve still got a problem with it, you hate Donald Trump.”

Hildebrand went on to say, “It’s the haters, you are the radicals, not the people marching.”

Yes, you’re now considered a radical extremist, not if you parade about in public wearing nothing but a jockstrap, but if you take issue with other people doing it.

The problem is Studio10 conflates disapproving of SGLMG with hatred for people who identify as LGBTQ. This is an issue for a number of reasons.

Second, disapproving of an ideology that, as Hildebrand noted, is widely accepted, celebrated and publicly lauded, does not equate to hating the people who subscribe to that ideology. They know this because they have no issue disapproving of religious ideas they don’t like and doing so in the name of “love.” Love and disapproval are not mutually exclusive, not even by their own inconsistent standards.

And yet more often than not, LGBTQ advocates consistently portray disapproval of LGBTQ ideology as being, by necessity, motivated by hatred and “homophobia.” But that’s simply not the case.

The argument that disagreement equals hatred is only ever selectively applied to Christians and Conservatives with a pretence of virtue. It’s an old tactic. Portray all disagreement and debate as stemming from ill-motives, then feign the moral high ground in shutting down and silencing your opponent.

But have these “LGBTQ advocates” ever considered the impact this might have on vulnerable people who identify as LGBTQ? Nobody has told the “LGBTQ community” that they are hated more than those who claim to be on their side. These are often the same people who acknowledge LGBTQ people are more likely to kill themselves.

Can you imagine believing that someone was likely to commit suicide, and then at the same time, repeatedly telling that person they are hated and despised by everyone who does not adopt their worldview?

In reality, however, the vast majority of Christians and Conservatives do not hate homosexuals or transgender people. We may strongly disagree, but despite what “LGBTQ advocates” might say, that doesn’t mean Christians must hate gays any more than it means gays must hate Christians.

There’s a lie often perpetuated suggesting that unless Christians and Conservatives abandon their convictions they cannot love or respect people who do not share those convictions. Anyone propagating that notion is most likely just exploiting the vulnerable for an anti-Christian and anti-Conservative political cause. That’s why the claim is often attached to a call to political action. Regardless of where we fall ideologically, we must all learn to recognise when we’re being manipulated.

But the real issue here is that we’ve forgotten, not only how to disagree, but that its OK to disagree. There’s no debate anymore. We simply have people building strawmen, then knocking them to the ground and claiming victory. But what does it actually achieve? Falsely portraying “religious” people as hateful and bigoted because they hold to their own convictions, won’t convince religious people that they’re hateful bigots. They know they’re not. But it may lead a vulnerable LGBTQ person to incorrectly believe that their Christian neighbour despises their existence and wishes them harm.

So, if Christians don’t hate LGBTQ people why don’t they just embrace everything LGBTQ? Because Christians, by definition, acknowledge Jesus as Lord. That means his Word, the Bible, is the ultimate authority in our lives on every subject, defining right and wrong, moral and immoral. LGBTQ ideology, however, presupposes Jesus was wrong on the subject of sexuality. That’s a serious issue for Christians because we cannot embrace LGBTQ beliefs and practices as “morally acceptable” without renouncing our belief in the supreme authority of Jesus and his Word.

LGBTQ advocates may attempt to muzzle Christians with Orwellian laws policing thought and speech, but two thousand years of church history will testify to the fact that Christians would sooner die than deny their Lord. At some point, LGBTQ advocates need to realise that forced conformity of thought is not a realistic solution. In fact, church history will also testify to the fact that the Christian church is most potent in the face of pressure and persecution.

If advocates really want to help the “LGBTQ community”, they would do well to stop telling LGBTQ people that they are hated and despised by everyone who does not affirm the rainbow worldview. If we want to actually return to civility, “LGBTQ allies” must stop suggesting that disagreement equals hatred, or that diversity in thought is bigotry. Because disagreement does not equal hate. 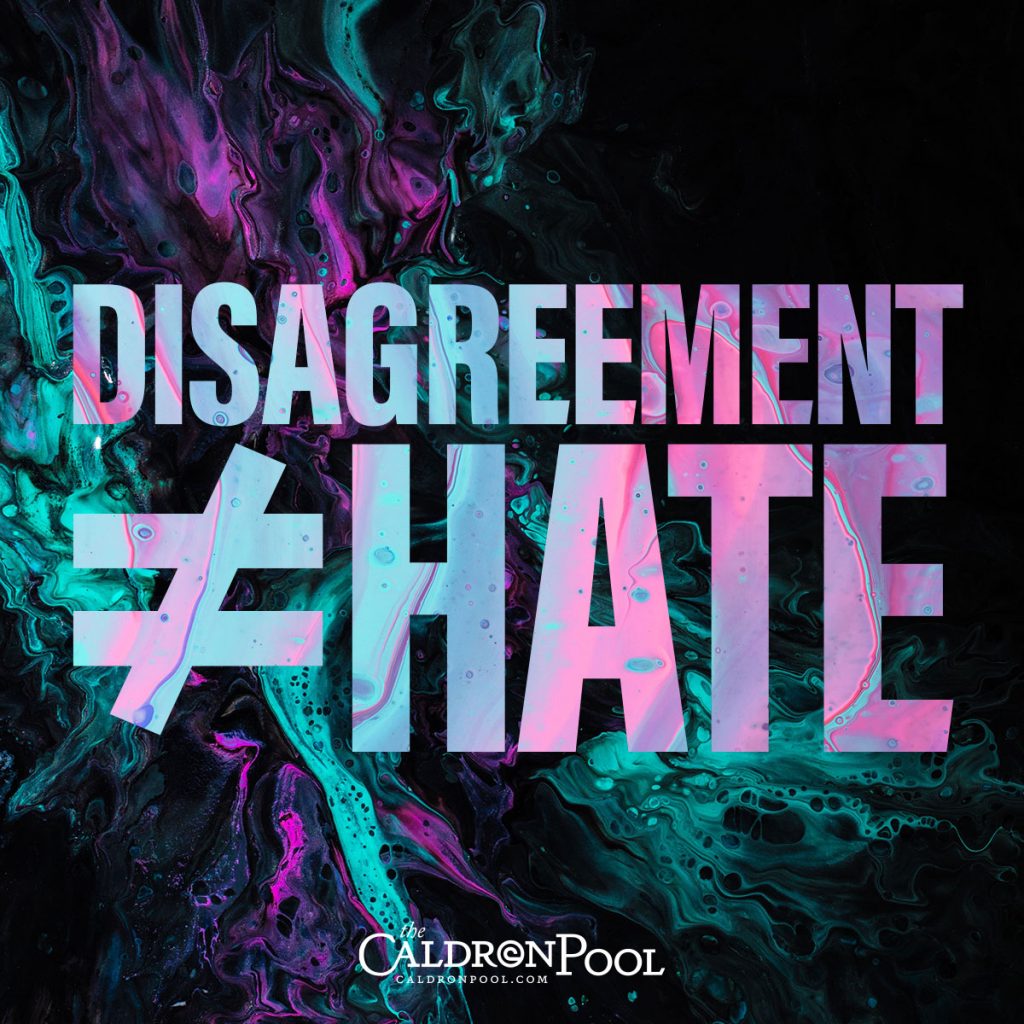