Corbyn, who has the potential of becoming the U.K’s next Prime Minister in the December election, was day two into his campaign trail in Glasgow, when according to The Scottish Sun, Cameron, a 60-year-old Church of Scotland minister, approached the Labour leader.

Referring to Corbyn’s tartan scarf and his criticism of the United States actions against the late ISIS leader Abu Bakr al-Baghdadi, Cameron stated:

Short video footage of the incident shows Corbyn surrounded by staffers, with Richard Cameron calmly approaching the Labour leader. After hearing the nature of Cameron’s questions, a clearly indifferent Corbyn and his entourage dismissed the Pastor. Turned their backs on him and walked in the opposite direction. In response, as reported by The Scottish Sun, Cameron then allegedly tells the now shuffling huddle of retreating Labour members, “Aye, you’re running away.’

Not long after the event, screenshots from Cameron’s Twitter account were spammed over the social media platform, quickly denouncing the minister as a troll, homophobic, Islamophobic, and bigoted.

I note Richard Cameron has been frothing in my mentions for years. Always nice to put a face to these obsessive trolls, isn't it? pic.twitter.com/mLDLAeglWe

Some of the tweets in question show Cameron voicing support for Israel Folau, promoting the Bible’s view on marriage, homosexuality and idolatry.

The BBC, joining the chorus of hate and manufactured rage against the pastor, falsely accused Cameron of “shouting at Corbyn.” They also appear to have scoured the minister’s posts and replies on Twitter for alleged abuses. Digging as far back as 2016 in an attempt to further the claim that Cameron’s views were both “homophobic and Islamophobic.” 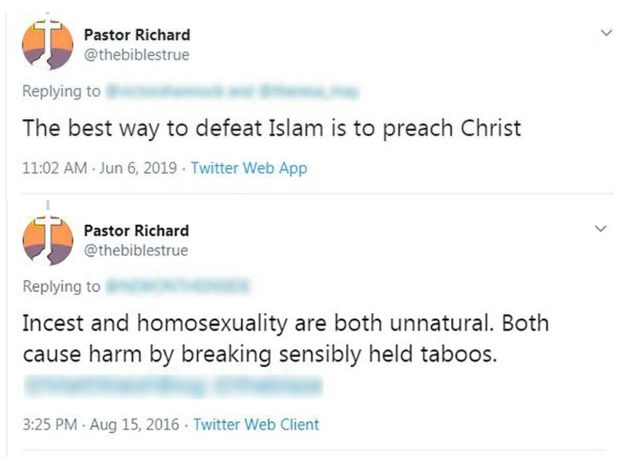 Cameron has also been relieved of duties at a local primary school, with one facilitator stating that, “Cameron doesn’t belong in the pulpit and that he’s glad Cameron will no longer be providing moral guidance to kids.”

Cameron’s questioning of Corbyn triggered a soft-doxxing of the Pastor by outraged Leftists, effectively forcing his suspension and a Church of Scotland internal investigation. Church officials have stated that Cameron’s suspension will ‘allow them to carry out an enquiry in relation to the incident which took place earlier this week and the subsequent complaints about his social media use.’

Leftists love a firebrand, as long as that firebrand is singing the Leftist’s tune. For evidence of this simply compare the open arms celebrity treatment of Leftist, activist, and Anglican Minister Rod Bower, who remains in his lofty position even after publically falsely labelling LNP M.P, Peter Dutton,  “a sodomite”  (et.al)

Cameron’s suspension and the justifications for it make a mockery of freedom and the Scottish people.

If Cameron’s Twitter feed is any indication, Cameron seems to epitomize the fiery, blunt, straight-talking Scotsman. To punish him for doing his job as a Pastor; for being true to his vocation, isn’t just to place a gag order on the Bible, it bogs down freedom of speech and squashes part of a cultural attribute long associated with what it means to be Scottish.

The suspension is a farce. It was led by a lynch mob on social media and triggered by Jeremy Corbyn’s apparent inability to face uncomfortable questions from a member of the discerning public.

Cameron should be reinstated on the grounds that the actions taken against him unfairly give advantage to manipulators. It gives power to dishonest critics who turn the term “hate speech” into a weapon and abuse others from behind a wall of anonymity, and pompous self-righteousness.

As Franklin Littell warned in 1962, anti-Christian ‘movements are the product of persecuting or corrupt, self-indulgent establishments. Soft religiosity is more of a threat to the Gospel than hard opposition.’ [i]

Cameron may need to tweak his approach to others on social media, but his example raises questions about what happens when those who are led into all truth, by the Holy Spirit (John 16:13), are by consequence, entering into direct opposition to those being led by the spirit of the age.

References:
[i] From State Church to Pluralism, p.32