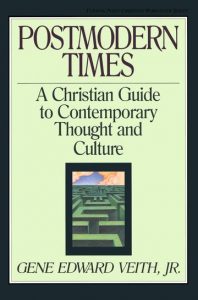 Several weeks ago, several second-hand books were being given away at my church. After cursorily browsing them, I disinterestedly selected Postmodern Times by Gene Veith, Jr. Usually, a book like that could easily sit on my pile for a year before being touched, but as it happens I decided to at least read the introduction when I arrived at home. It turned out that this would be the second non-fiction book I have read in my life that I would have difficulty putting down (The other is God’s Undertaker by John Lennox). It was outstanding.

What first struck me about this “guide to contemporary culture” is that it was published in 1994. Yet Veith portrays very clearly the postmodern mindset, its flaws and tendencies, and what it is doing to the world, in a way that will resonate more broadly and with more strength today than when it was written.

For instance, he refers to an academic conference entitled “Rage!” At this conference a transsexual (not transgender, back then) presented a paper on his rage at not being accepted by lesbians as a woman. Apparently a controversy broke out at the conference when a white scholar gave a paper on the rage expressed in movies by black directors, because the cultural appropriation was unacceptable. Another paper attacked “self-centred white gays and smug white lesbians” who want to enter the mainstream of society by getting married or joining the army, and accused them of endorsing free speech among other things. Veith explains that “calling someone ‘white’ is an unanswerable post-modernist put-down”, and notes that “already free speech… is being restricted on campuses, both by informal pressure and by statute, in the name of sensitivity to aggrieved groups”.

Does any of that sound familiar? One quarter of a century ago he wrote that!

A week after picking this book up, I met a pastor who was staying with my parents when my church hosted a presbytery meeting. We both like reading, but he has formal university studies in literature behind him, giving him greater skill at expressing his critique. When I mentioned that I was reading a book on postmodernism and couldn’t remember who the author was, he said “was it Gene Veith?”

It seemed uncanny that he would know about the obscure-looking book I collected from the church table. I then suspected that this book is not as obscure as it had looked—at least not to someone who has studied the arts in a secular context and attended seminary. His description of the book was that it is “a good primer” on the topic.

He’s right. “A good primer” is a good way to describe the book. I would also say, however, that this book should not be confined to academics and pastors. Just as the more radical aspects of postmodernist thought have now “graduated” from the universities, so this book has a message that is needed by the laity, not just the clergy, and in fact even by non-Christians. In my opinion, the writing is very accessible, though it is an intense read. I wanted to quote some of it, and found that I wanted to quote all of it, so better just to let you read it for yourself. Leith’s an efficient writer; almost every paragraph contains fresh ideas clearly expressed that draw forth an “hmm”, “yes”, “wow” or “amen”.

This book should not be confined to academics and pastors.

The modern era had little regard for history or culture, believing itself to be the apex and transcendent. The death of modernism is a good thing in many ways. A rejection of rationalism, a respect for history, a restoration of spiritual awareness and acceptance of the supernatural—these remove barriers to Christianity.

However, just as modernism rejected the idea of the supernatural, postmodernism now rejects the idea of truth. Something Veith says several times is that postmodernism cares only for surfaces. I found this to be a poignant description. Nothing, to the postmodernist, has a solid core. Even architecture is about ‘facades’. Christianity, likewise, is reduced to a lifestyle or “culture”—just one alternative among a number of cultures that cannot understand one another.

Veith’s book is in some ways prophetic. His concerns for society and the church have both largely been realised, because the wheels were already in motion when he wrote. In his discussion of technocracy, he could have no idea of smart-phones and google and just how these would play out. However, even in those areas his descriptions still hold.

His discussion of the church is the most important. The first threat it faces is “sychretism”—the same threat that existed for the Israelites and then the church in all eras—the threat of selling out to postmodern society. Postmodernist Christianity becomes merely a behavioural phenomenon. It becomes the “culture” they believe it is. A second threat, however, is due to the church being “excommunicated from society” into a cultural silo. Post-modernist thinking subdivides the whole world into cultural silos, and Christianity is just one of them. The church, however, must not believe the lie that it is not meant to have impact outside its own gates. That it should not declare itself, and seek to impact legislation and policy and people. We’re not merely an alternative, we are ambassadors for the truth, for the true current King of the whole world.

It reminded me of a something I learnt a few years ago; the bible doesn’t say that the gates of the church will not prevail against hell. It rather says that the gates of hell will not prevail against the church. Gates don’t attack, they defend. The church is the one that is actually on the offensive, even when it looks otherwise; Christians are armed with sword and shoes, not just breastplate and shield. This brings me to Veith’s exhortation to the Church, which is that it should become more confessional. He clarifies that confessionalism should not mean “dead orthodoxy”, but “live orthodoxy” and he presents a good case that, “though emphasising doctrine will highlight the doctrinal differences between the various Christian traditions… this need not mean destructive religious warfare”.

His closing chapter is built around Psalm 11, which says “if the foundations are destroyed, what can the righteous do?” Postmodernism is anti-foundational. But to paraphrase Jesus, if you don’t build your house on the rock, what will happen when the rains and floods come and beat on your house? Psalm 11 asserts that there is a foundation. “The Lord is in his holy temple… the Lord is righteous, he loves righteous deeds, the upright shall behold his face.”

Seeing an obstacle is a pre-requisite for side-stepping it. Likewise understanding our culture assists us to avoid its traps and pitfalls. This insightful book could assist many to purge any vestiges of the postmodernist lie from their own mind and hence, on the flip side, to hear God’s Truth all the more clearly.

Nick Kastelein BEng (mech) (hons) is a Christian and a conservative, who grew up and lives in Adelaide. He graduated from the University of Adelaide in 2011, with a bachelor of Mechanical Engineering with first class honours. He now works for an engineering consultancy, primarily on oil and gas industry design projects.