The NSW Justices Association received instruction from the NSW Department of Justice, earlier this week, warning Justices of the Peace could be suspended or fired if they refuse to witness for same-sex marriages.

The notice goes on to state, refusal to witness, even on religious grounds, “would amount to unlawful discrimination under anti-discrimination legislation.” 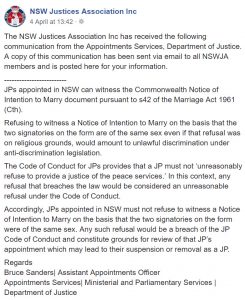 Refusing to witness a Commonwealth Notice of Intention to Marry on the basis that the two signatories on the form are of the same sex even if that refusal was on religious grounds, would amount to unlawful discrimination under anti-discrimination legislation…

Accordingly, JPs appointed in NSW must not refuse to witness a Notice of Intention to Marry on the basis that the two signatories on the form were of the same sex. Any such refusal would be a breach of the JP Code of Conduct and constitute grounds for review of that JP’s appointment which may lead to their suspension or removal as a JP.

The communication was emailed to all NSW Justice Association members and later shared on the group’s Facebook page.

Mark Latham rightly said on Facebook this morning: “No one should be forced by government into doing things they regard as morally wrong. In truth, the new [SSM] legislation did not protect religious freedom. This has now become clear… Unfortunately, when parliament passed the Turnbull/Shorten gay marriage law, Australia moved one step closer to the powers of a police state.”