The coronavirus pandemic reached Australia in January 2020. After three months of the epidemic in the country, the death toll has just risen to 18 after another elderly person, aged in her 80s, acquired the virus overseas a couple of weeks ago and died during the weekend at a Canberra Hospital.

In Victoria, three people in their 70s died in March after being diagnosed with Covid-19. The death of a fourth man, in his 80s, was reported on 29 March.

In any case, in answer to the crisis, the Australian government has adopted deeply draconian measures that will inevitably lead to the death of numerous businesses, putting many at risk of financial destitution.

But destroying the economy does not appear sufficient for this government.

Prime Minister Scott Morrison proudly stated that his government will be funding “domestic violence support … to reduce violence against women”. 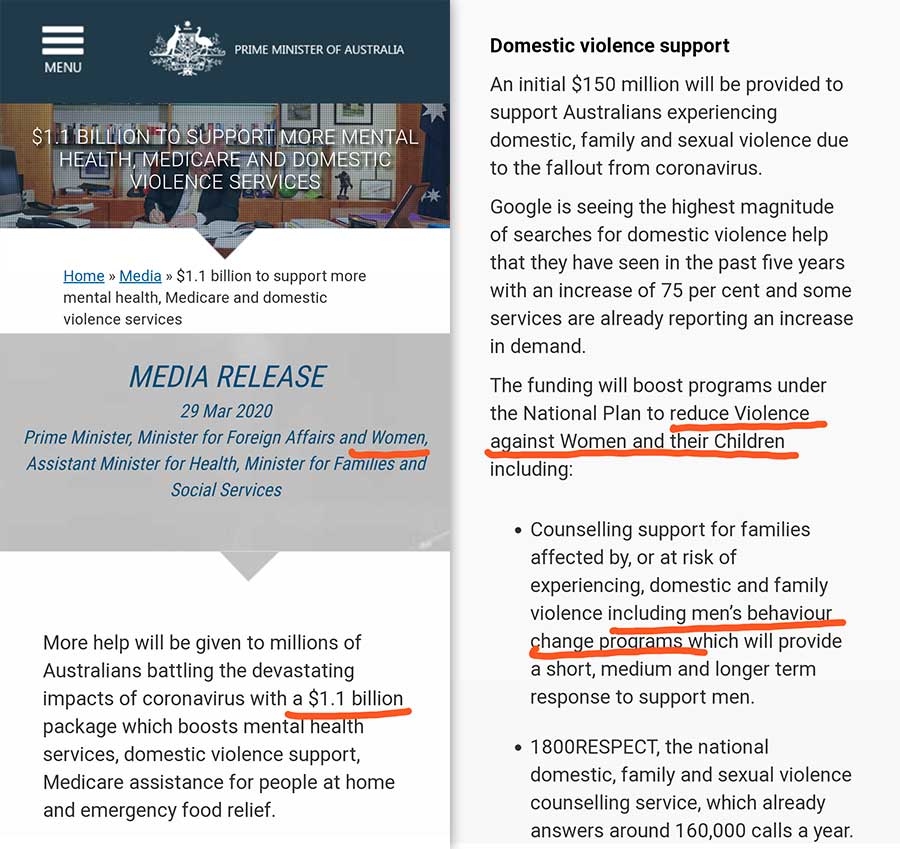 But what about male victims of domestic violence?

It appears that for the Morrison government men’s lives do not really matter. Otherwise, this taxpayer-funded program would not be attempting to place all the blame on men, assuming that no man can ever be a victim of domestic violence.

Is the Prime Minister tacitly agreeing with the radical feminist view that due to the coronavirus crisis there has never been a better time to attack men and to destroy the “nuclear family”?

After all, writes the feminist theorist Sophie Lewis, “far from acquiesce to family values ideology, the pandemic is actually an important time to generally empower … [women]. We deserve better than the family. And the time of corona is an excellent time to practice abolishing it”, she says.

Anyhow, the announcement by the Morrison government ultimately puts at risk of further violence men who are regularly abused by their female partners, and it is based on a sexist assumption that every male victim of violence may actually be the perpetrator.

Contrary to popular opinion, women instigate domestic violence more frequently than men. Indeed, research is finding that women use far more emotionally controlling or bullying behaviour – coercive control – than men. It is this that can lay the groundwork for physical abuse in a domestic relationship.

For years, coercive behaviour has been talked of as a tool men use to control women. But in my research, men reported experiencing significant coercive control. They often described themselves as ‘walking on eggshells’.

This has a significant impact on the physical and mental health of emotionally abused men. The UK Crime Survey found that 11 per cent of British men abused by female partners try to kill themselves, compared with only 7.2 per cent of women who are abused by male partners.

One of these male victims reported: “She told me no-one would miss me if I killed myself and suggested I find myself a quiet corner and hang myself”.

Research has also found that attacks on a man’s self-worth may be especially debilitating. One of the victims said: “If I told her to stop hurting me, she’d say: ‘What kind of man are you?’ She’d spit in my face and say repeatedly that I was a spineless, pathetic excuse for a man”.

Dr James Dobson is the renowned family therapist and the founder of Focus on the Family. He offers a “note of caution which is likely to be misunderstood by those who want to be misunderstood”. Dr Dobson contends that some women deliberately resort to extreme forms of verbal and psychological abuse in order to deliberately provoke a physical reaction from their husbands.

According to Dr Dobson:

I have seen marital relationships where the woman deliberately “baited” her husband until he hit her. This is not true in most cases of domestic violence, but it does occur. Why, one may ask, would any woman want to be hit? Because females are just as capable of hatred and anger as males, and a woman can devastate a man by enticing him to strike her. It is a potent weapon”.

Once he has lost control and lashed out at his tormentor, she then sports undeniable evidence of his cruelty. She can show her wounds to her friends who gasp at the viciousness of that man. She can press charges against him in some cases and have him thrown in jail. She can embarrass him at his work or in the church. In short, by taking a beating, she instantly achieves a moral advantage in the eyes of neighbours, friends and the law. It may even help her justify a divorce, of if one comes, to gain custody of her children.

Dr Dobson understands why such empirical analysis can be inflammatory. However, he remains adamant that “domestic violence has more than one source of motivation, and that fact should be admitted”.

While on the topic of violence against women, such violence is apparently far more frequent in lesbian relationships than between husband and wife.

In a 2015 review of literature in the Journal of Sex & Marital Therapy carried out by Dr Colleen Stiles-Shields and Dr Richard A Carroll from Northwestern University School of Medicine, it was concluded that domestic violence is far more likely to occur among lesbian couples as compared to heterosexual couples.

These findings completely debunk the feminist narrative about domestic violence. It clearly reveals that it is entirely insufficient to explain the complexities of domestic life, including the disturbing occurrence of battering among lesbians.

Unfortunately, the Australian government has once more embraced a false feminist ideology which ignores that women, too, are capable of inflicting violence on their partners and children with no apparent justification.

If the government was really concerned about breaking the cycle of violence, they would for instance recognise that child abuse by mothers is surely part of the problem. Around Australia there are government departments struggling to cope with daily reports of child abuse, most often by their mothers.

In a time when the country needs to be united in the face of a serious economic crisis, this sort of divisive policy is simply unacceptable. Instead of sending more money to the feminist-controlled domestic violence industry, this should go to supporting the jobs and livelihoods of the millions of Australians who are deeply affected by the measures adopted by the government in the face of the present health crisis.

In sum, the Australian Prime Minister is effectively attempting to advance a feminist agenda at the cost of more innocent men, women and children. Above all, it is important to realise that domestic violence is not a gender issue, and that women are sometimes part of the problem.

To use our taxpayer’s money in this time of great crisis in order to further demonise fathers and husbands is simply unacceptable. It is not just the economy that faces collapse as a result of government action. It is also Australian families.