It’s a peculiar thing to see Australians, who naturally have a caustic view of Americans, along with contempt and suspicion of any kind of pageantry and ceremony, embrace American cultural traditions which involve pageantry, and ceremony.

If the irony fits, wear it. None of what I’ve just said is untrue.

Remember the hate and mockery thrown at Tony Abbott when his government reinstated knights and dame honours for Australians? Only to have Malcolm Turnbull ditch it, after he led the takedown of Abbott’s reign as Prime Minister, and was himself enthroned as Prime Minister in a bloodless coup.

Should Australians completely surrender and adopt the American tradition of Halloween, (one that reflects pagan ritual more than the All Saints Day it is founded upon), why stop there?

If we’re going to go “all the way with LBJ”, let’s also adopt great freedom-loving American traditions such as being able to freely wear the Christian faith on our sleeves, without the fear of being dismissed, and ridiculed, as bigoted, religious nut jobs. If we’re to follow Uncle Sam’s sometimes misguided children and accommodate Halloween, why not also accommodate the mighty North American Thanksgiving holiday – albeit with a unique Australian flavour?

It’s not too far of a stretch. Australia already has an unofficial National Day of Thanks. The day became a reality in 2003, is mainly practised by Australian Christian community groups and happens on the last Saturday of May each year. More to the point, Norfolk Island residents already celebrate Thanksgiving, following the ‘legacy of American whaling ships that would make frequent stops to the island during the late 1800s.’ So why not go the extra mile?

After all, it’s the cohesion brought about by a deep gratitude for family, faith, and freedom, all packed in with a sense of responsibility, respect for history and a binding community, that makes those national days work in Canada and the United States.

These are embedded attributes of a cohesive community that Australian’s have lost, and in some respects may never have had in the first place; largely due to our worship of self. Our inherited, arrogant enlightenment, hyper-individualism, the i/it in “me culture”. The me, myself and I, over against the i/thou.

Aussies who fail to understand this reality will ultimately fail in adequately adopting American traditions. They’ll find themselves stumbling in the dark in fruitless attempts to celebrate them.

Such an embrace of tradition, ignorant of that tradition’s meaning and history, is a dangerous, foolish participation in an empty ritual. It goes from one innocent flirtation to an embarrassing gullible embrace of anything and everything. 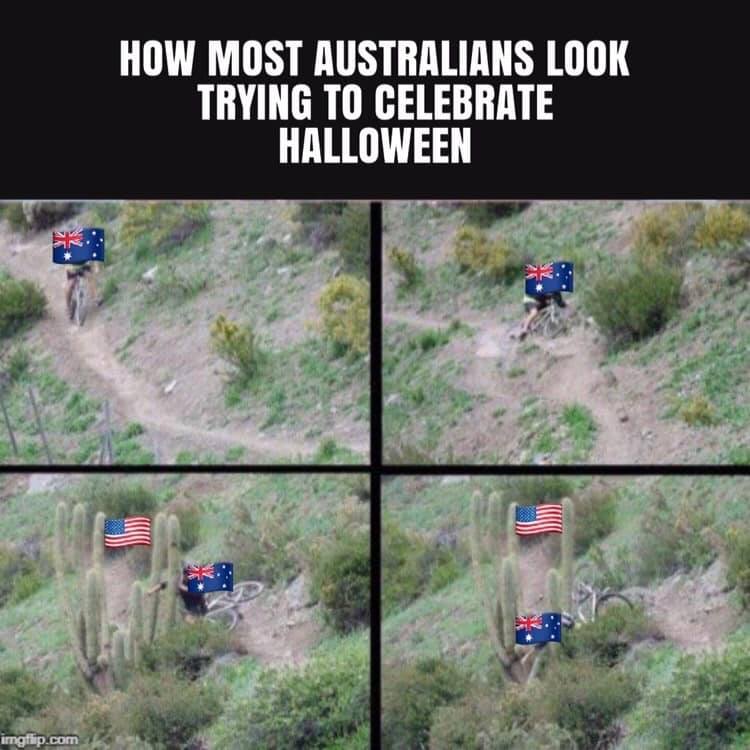 In the case of Halloween, it unnecessarily places vulnerable children, and a society wrestling with its insecure agnosticism, weakened identity, and anxiety-ridden lack of self-understanding, in harm’s way.

As put by a Saiko Woods, a Pastor on Facebook who simplified the content of Paul’s words to the Romans: “Yes men” and gullible women are the lifeblood of EVERY cult!” (Romans 16:17-18, ESV)

The simple, blunt truth is that Americans know how to do community far better than Australians. For all its benefits, enlightenment individualism has created a cavernous hole in Australian society. This chasm isn’t hard to see. “Me culture” has meant that families become strangers, rarely meeting more than once a year. Neighbours no longer know each other’s names, let alone neighbours knowing anything about each other. This makes seeing groups of children dress up, and troll the street asking for lollies seem clumsy and hollow, even desperate.

It’s also not unreasonable to suggest that Australians adopting Halloween is a sign that the religion of secular humanism is found wanting.  The embrace of Halloween is a symptom of a longing for the transcendent, that which exists outside of ourselves; a longing for God, faith, family and community.

Australians adopting Halloween could be seen as a longing for familial dysfunction to end; a longing for the gaping hole produced by enlightenment individualism – endemic to Australian society – to be filled. If so, the tragic irony is that God, family, faith, and responsibility, the very things which can fill this chasm, are often the very same things written off as anachronistic, too awkward, worthless, or inconvenient.

This is ultimately why adopting American traditions may fail or even become destructive. The only antidote to this is for Australians to also adopt, and accommodate, the fundamental foundations so closely associated with those who celebrate these traditions. We cannot have one without the other.

These foundations are built on faith, which both justly binds and compassionately sets free. These foundations built-in freedom, under grace in Christ, ground healthy families and bring the community together.

If Australians are to embrace Halloween, let this be a cautious, informed embrace, with room allowed for it to be rejected. If Australians are to follow North America, let it include Thanksgiving, and a strong sense of freedom, responsibility, community, faith and family. All of which, despite its forced dysfunctional decline over the years, is still very much part of what made and makes America great.