There’s a claim going around that Australian prisons are 82% filled with Indigenous Aussies. That figure is false. The actual number is 28%.

To make the case to justify a statement such as “Indigenous Australians are over represented in Australian prisons” the figures have to be bling’d out with shock and awe percentages, then wrapped in jargon.

Allison Wong, in ‘Build Communities, Not Prisons’ written for activist group ANTaR, illustrated that in order to arrive at the narrative of over-representation, the data needs to be magnified.

According to the process followed by Wong – which was based on 2007 ABS figures and AIC conclusions in 2006 – Indigenous Australians made up 2.4% of the National population, and at the time, 24% of the prison population. From this Wong concluded that Indigenous people were over-represented in Australia’s prison system.

While Wong doesn’t distort the ABS data, the above ABS information suggest that she’s using the information to forge a narrative. Wong creates a distinction between the crime and the cause of it. Her thesis then asserts that the real crime is over-representation. The effect of this over-representation frames the various causes. Not the other way around.

If I’ve understood Wong’s point correctly, over-representation is why 28% of Australia’s Indigenous population are imprisoned, while actual crimes are the result of factors influencing those who commit crime.

If I’m right about her conclusion, Wong’s case for over-representation is just another long winded, academic way of trying to persuade the public that the underlying reason for Indigenous Australian crime isn’t crime at all. Racism is. The inference is that over-representation is the effect and ‘systemic racism’ the cause.

Wong’s overall report is valuable. It addresses various factors that ‘play a role in the causes of crime’ within the Indigenous Australian community. Her analysis points to potential solutions, as well as the detrimental effects of cycles of abuse, and re-imprisonment. Two factors which tend to bounce of one another.

As far as Indigenous versus non-Indigenous deaths in custody goes, Australia has had a dedicated program aimed at reducing the tragic loss of life in prisons and police custody. This was put in place after the Royal Commission into Aboriginal Deaths in Custody in 1987.

One in two accidental deaths were due to MVPs and one in five were due to some other type of pursuit. The number of Indigenous hanging deaths in police custody was relatively small, with no Indigenous hanging deaths occurring since 2008–09. The number of Indigenous deaths resulting from gunshot wounds was also relatively small, and notably smaller proportionately than non-Indigenous deaths in police custody. (Source: AIC)

1501 (82%) non-Indigenous. Based on your figure of 28%, it seems Indigenous people are under-represented in deaths-in-custody statistics.

Beyond this, it’s apparent that the justified emphasis on indigenous deaths in police custody or in prison has meant a de-emphasis on non-indigenous deaths. Not to include this greater number in the discussion about the treatment of prisoners in the Australian judicial system, for fear of losing control of the narrative about over-representation, is an injustice in its own right. No one should be left out because their ethnicity doesn’t fit the narrative, or their melanin isn’t the right colour. 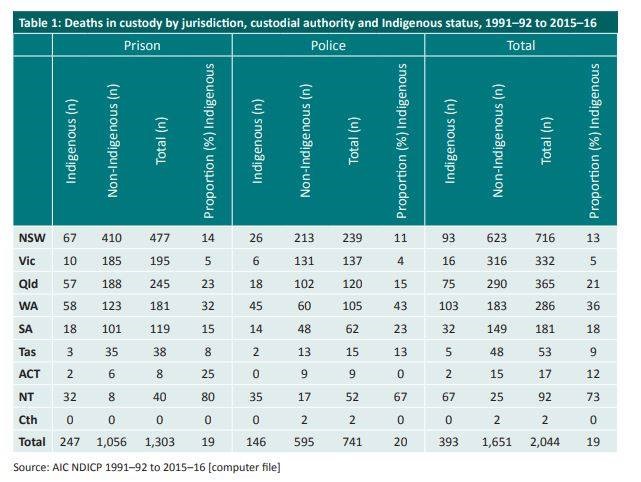 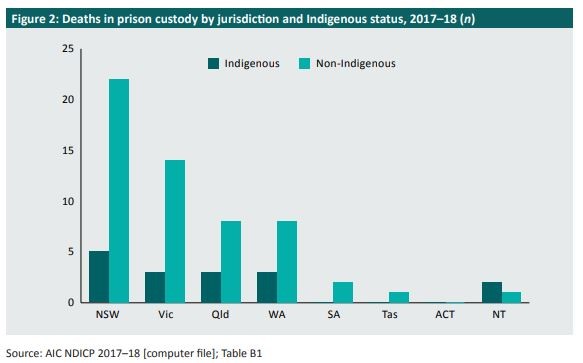 Prison reform should always be under constant review. These aren’t just numbers, they’re people. Falsifying data or manipulating it in order to emotionally corrall people into the service of an ideological paradigm harms this process. As the lessons of the past few weeks teach us: we need less megaphone monologues, and their emotionally charged slogans. We need more grace, and we need more dialogue.

When people kneel before false narratives, as they would an idol, truth is being bent a certain way in order to fit it into a neatly constructed shape. This exchanges truth for falsehood. Instead of falsehood being corrected by facts, truth is surrendered into the service of deceit. This elevates intellectual dishonesty, and eviscerates reason, justice, mercy and the effectiveness of peaceful, rational protest.