If you haven’t seen Caldron Pool appearing in your News Feed lately, it’s not because we’ve gone MIA. Facebook is censoring us after falsely accusing our page of violating Community Standards.

On Saturday, the social media platform falsely claimed an article highlighting the plight of Christians in Nigeria “praised or supported” the Islamic terrorist group Boko Haram, who had executed two Christian aid workers. 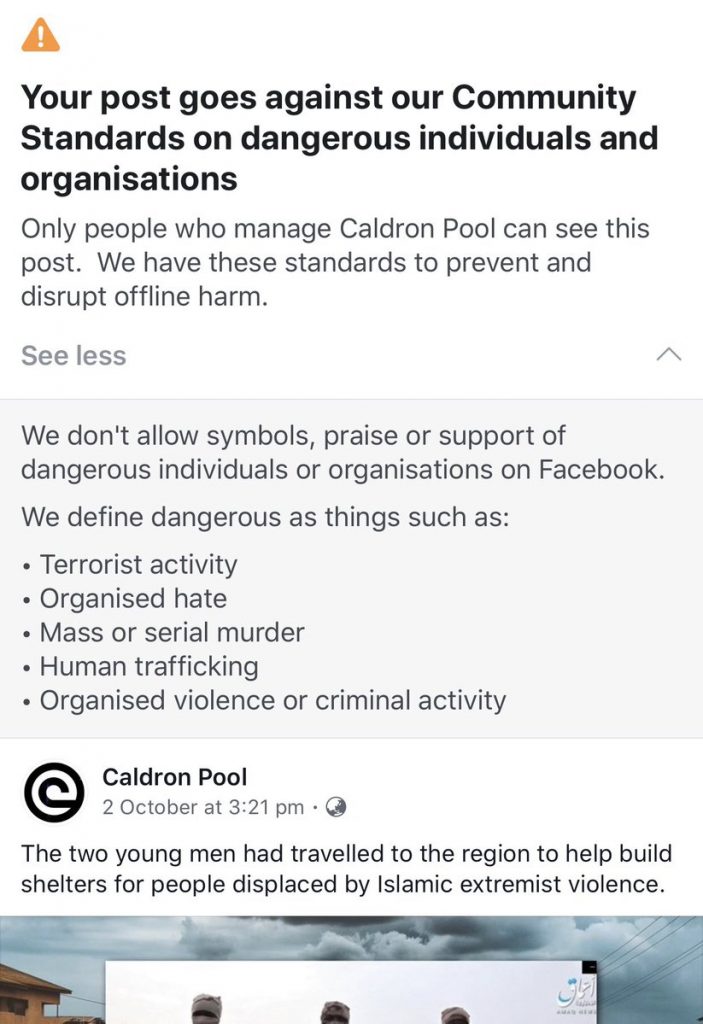 Facebook removed the post and placed restrictions on our page, effectively silencing our posts for a week.

On appeal, Facebook admitted they were wrong about the article and immediately restored our post. However, they did not remove the restrictions placed on our page, so they’ve essentially censored us without any legitimate reason for doing so.

But this isn’t surprising, really. Last week, the tech giant accused us of breaching Community Standards by sharing “fake news.” The accusation was in relation to an article titled, “The Church of Sweden Proclaims Climate Change Greta Thunberg the Successor of Jesus Christ.”

Facebook pinned a “hoax alert” to the story, which is now shown in News Feeds along with an “independent fact-checker’s” response. Despite the response being attached to Caldron Pool’s article, Facebook’s fact-checker doesn’t actually interact with our piece at all. The “hoax alert” was written in response to an article by The Daily Wire who had published the story with a similar headline. You can read more about it here.

This was the second time Facebook accused Caldron Pool of breaching Community Standards and threatened to unpublish our page.

The first “breach” took place in July 2019, when Facebook slapped Caldron Pool with a month-long suspension for referring to Islamic terrorists as ‘Muslims’. Turns out it’s easier for a male to identify as a female, than for a terrorist to identify as a Muslim.

At any rate, it seems in the lead up to the 2020 U.S. presidential election, Facebook is prepared to conjure up just about any reason, even blatantly false reasons, to silence political ideas they don’t approve of.