The recent High Court decision which unanimously—seven to zero—upheld the appeal of Cardinal George Pell against the Victorian Court of Appeal’s decision to uphold the original trial verdict of child abuse, is to be welcomed. The High Court has held that the conviction did not meet the required standard of proof.

However, this case is memorable for another reason. It highlights the problem that the current legal process involving child sexual abuse has itself a number of potential flaws. The flood of publicity and the pre-trial shaping of public opinion by the ABC and politicians made it more difficult for Cardinal Pell to receive justice and a fair trial. Take Daniel Andrews, the Premier of Victoria, for example. Immediately after the Pell verdict, Andrews issued a media press release stating: 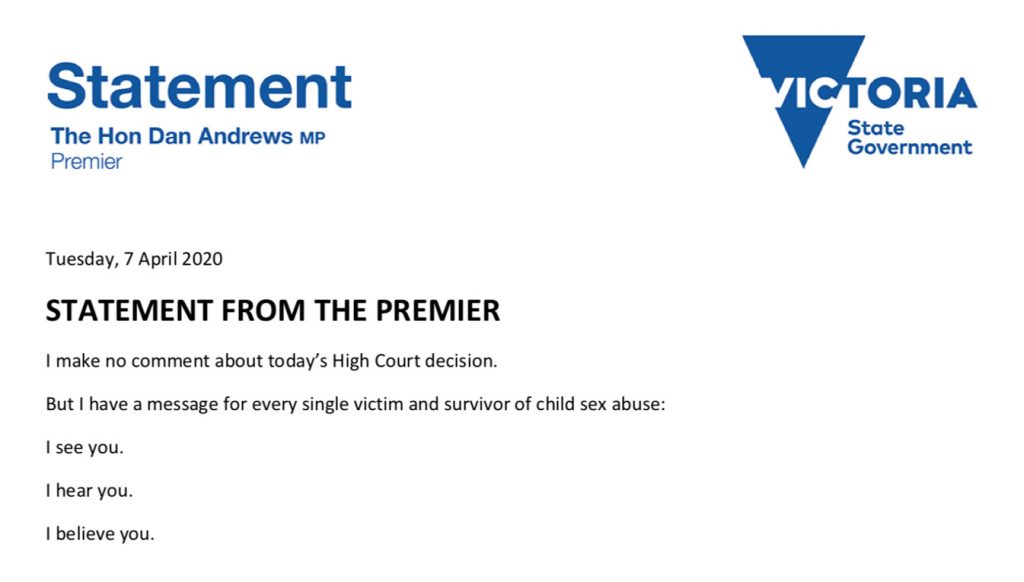 It is wrong for the Premier to categorically state as a principle that we must, #BelieveAllVictims. It is a basic principle of justice that everyone is innocent until proven guilty. Is Daniel Andrews rejecting the authority and wisdom of the highest court in our land, in favour of the unfounded accusations of anyone who claims to have been sexually abused?

If that’s the case, then no-one’s safe. Not even him! But let’s not also forget that this was the same government which allowed Adrian Bailey, the serial rapist, out on bail only to tragically kill Jill Meagher.

Now let me be absolutely clear. Child sex abuse is a horrific crime. And it’s not only a sexual crime, it’s also a gross abuse of power. As such, it should always be dealt with seriously, especially if it has been committed by a community leader who occupies a position of authority and trust. However, as Cardinal Pell said in his statement:

…my trial was not a referendum on the Catholic church, nor a referendum on how church authorities in Australia dealt with the crime of paedophilia in the Church. The point was whether I had committed these awful crimes, and I did not.

As uncomfortable as this truth is, we also have to acknowledge that—for a plethora of different reasons—sometimes people are confused, coached by others, or induced to give an account of the event which does not coincide with what actually took place. Even about an incredibly serious and sensitive subject such as being sexually abused. For example, just go back and read, To Kill a Mockingbird, a famous American novel from the 1960s that was predicated on a real-life historical case.

One of the aspects of the original verdict against Pell that struck me as being especially dubious was that Pell was convicted on the uncorroborated testimony of only one person. Everyone else there that day—and there were many—testified that they saw nothing untoward or suspicious.

It is a principle of justice that undergirds the whole Western tradition of law that testimony ordinarily ought to be corroborated by more than one person (Deut. 19:15). Ironically, one of the Biblical proof-texts often used by the love-is-love brigade is John 8. This is where Jesus rebukes the religious leaders for condemning a woman guilty of adultery, famously telling them, “Let he who is without sin cast the first stone.”

But what they conveniently overlook was that not only did Jesus challenge her promiscuous lifestyle—note, how he tells her to go and ‘sin’ no more in verse 11—but that they themselves were guilty of not producing a second witness in keeping with the Mosaic Law. As Miranda Devine writes in The Daily Telegraph:

Convicting innocent people does not help the victims of child sexual abuse. Quite the opposite. It allows the guilty to go free and creates doubt over genuine cases.

The High Court has restored our faith in Australian justice, but it utterly condemns Victoria.

At the end of the day, Cardinal George Pell has no charges that remain against him. And he has graciously said that he “holds no ill will towards my accuser”. One would hope that Daniel Andrews would do the same. Not just towards victims, but also to those who have been falsely accused.

Maybe the Premier’s grumpy that one of the champions of religious conservatism has not been condemned? Or maybe he realises that the Australian legal system and its citizens expect the criminal law to be administered justly, which means meeting the required standards of proof.