Things are looking gloomy in the Sunshine State. Up to 148 Queensland election candidates have signed up to Fair Agenda’s pro-abortion candidate pledge. The independent group is pressuring candidates to vow, if elected, they will, “vote to remove abortion from the criminal code, and support laws to ensure all Queenslanders can safely and legally access full reproductive healthcare, without being harassed or intimidated.”

The pledge has also gained backing from The Human Rights Law Centre, Women’s Legal Service Queensland, White Ribbon, and Queensland Council of Unions. Candidates who have signed up commit to supporting three reforms in particular:

For those who are unaware, this is what a baby born at just 21 weeks looks like: 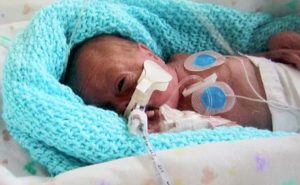 The child in the picture is Jacob McMahon, born in the U.K. on February 22, 2011. Five months after Jacob’s birth, he was deemed healthy enough to leave the hospital with his mother and father. So, was Jacob less-human at 21 weeks than he was at five months? The myth that person-hood changes depending on size, level of development, environment, or degree of dependency has been thoroughly debunked. And yet pro-aborts persist!

According to studies, two thirds of babies born at 24 weeks gestation who are are admitted to a neonatal intensive care unit (NICU) will survive to go home. While babies born at 30 weeks gestation have almost a 100% chance of survival. So, when is it okay to kill a baby?  This is not merely “potential life” we’re speaking of here. As Dr. C. Ward Kischer, emeritus professor of Cell Biology and Anatomy, specialty in Human Embryology at University of Arizona College of Medicine, states:

“Virtually every human embryologist and every major textbook on Human Embryology states that fertilization marks the beginning of the life of the new individual human being… Human life is never potential. Life is life. A life that is not living, is dead.”

According to the reforms, doctors opposed the murder of the unborn will then be required to participate by referring their patients to doctors who are willing to assist in the murder of the child. And lest anyone attempts to reach out to a mother approaching the slaughter-house that is an abortion provider, the reform ensures a 150 meter pro-life free-zone.

Abortion is often portrayed as benefitting women. Yet ironically when decisions are made on the basis of sex, girls are aborted far more often than boys. Out of eight thousand amniocentesis, that is abortions, done in Bombay, seven-thousand nine-hundred and ninety-nine of them were girls, one was a boy. This is true in China. You’re only allowed to have one child and if it’s a girl, they kill it. In one study in the United States, twenty-nine out of forty-six girls were aborted, only one out of fifty-three boys were aborted. So the idea that abortion benefits women doesn’t seem to fit the facts, it winds up in the slaughter of women around the world.1