Avi Yemini was banned from Twitter after a tweet addressed to climate change activist Greta Thunberg was flagged as being in breach of Twitter’s EULA.

Yemini’s criticism wasn’t without merit. He was responding to Greta’s widely publicised, scripted speech, performed before the UN summit on Climate Change. Her performance appeared manufactured and forced.

Emotionally distraught, Greta appeared to be intimidated and scared. She repeated the words ‘’How dare you” as part of her claim that the UN (aka the world) had “stolen her dreams and childhood with empty words”, and that “people are suffering, people are dying” and that “entire ecosystems are collapsing.”

Greta preached from the official socialist narrative on “climate justice.” The 16-year-old passionately asserted that we’re “in the beginning of mass extinction”; and that instead of inciting panic and forcing irrational change, all the UN does is “talk about money and fairytales of eternal economic growth.”

Her shaky performance prompted Ryan Saavedra of The Daily Wire to point out that Greta comes from a family of talented performers. Citing The Washington Examiner, Saavedra explained that her parents are ‘stage-parents’. Her mother sang opera internationally, and her father and grandfather both gained fame through acting and directing.”

Matt Walsh chimed in saying that Greta Thunberg was a victim of child abuse:

If any grown-up in Thunberg’s life really cared about her psychological and emotional well-being, they would sit her down and explain that climate change is not going to destroy human civilization. Yes, the climate is changing. Climates tend to do that. But whatever role humans play in that process, and to whatever degree, it is not going to result in the end of all life as we know it. Talk of a 10-year, or 12-year, or 20-year, timeline before planetary catastrophe is all an invention of politicians and media personalities. Scientists don’t speak this way.

Walsh wasn’t the only person to show serious concern for the teenage activist. Social media feedback, both for and against, has #Greta mentioned in over 1.21 million tweets since her speech.

Avi Yemini was among them. It seems that someone behind the scenes took a dislike to his criticism and decided to hit the big, red, shiny, hammer and sickle button. His alleged crime against the people’s republic of Twitter was “manipulation and spam.”

Given the large amount of voices on social media speaking out in concern for Greta’s role and how she is being treated by her handlers, Twitter’s beef is apparently not so much with what was said, but who, and how they said it.

I hate the UN more than you could imagine, but they didn’t steal your dreams or childhood – your parents did. They should be jailed for the sickening child abuse they put you through. They’ve scared you into an extremist. 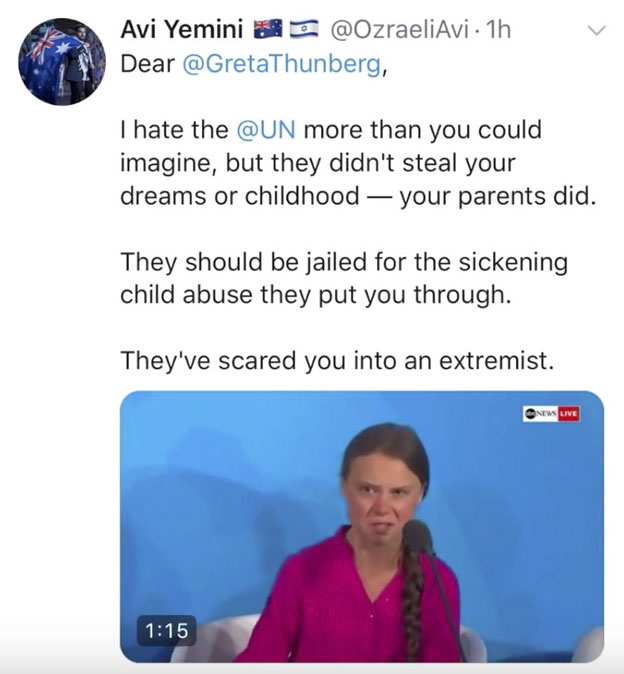 TR news posted Avi’s Youtube response to the Twitter ban, where he accused the social media platform of concocting “an excuse to silence him.” Though the ban is now under review, Avi asked for support saying, “use hashtag #FreeAvi because whether you agree with me or not, this is a freedom of speech issue”, and if “they can come for me” on a bogus charge, “they will come for you.”

Earlier this year, Yemini was also permanently banned from Facebook, after Jim Jefferies had tried to set him up, using the dishonest journalistic practice of re-engineering interviews, through cut and paste sound bites to perpetuate a particular narrative. Yemini alleges it was an attempt to ‘brand him as far-right and somehow link him to the atrocities committed during the Christchurch shooting.’

Facebook banned Yemini for “hate speech” because he posted hidden video footage of Jim Jefferies, ‘mocking Mohammad and drawing him as a ‘wobbly ghost’.’

The Facebook ban coincided with Yemini being blocked from entering the United States back in April. His entry was stopped after Comedy Central reported him to American authorities, due to concerns they had about him walking into Comedy Central and ‘confronting producers’ An interview resurfaced around the time of the Christchurch shootings featuring Yemini, who had said that he only agreed to do the original interview with the ‘proviso they didn’t put him in the same story as neo-Nazis.’

Yemini told 10 Daily that his concern was due to Comedy Central not sticking to that arrangement, and instead, ‘editing and context were manipulated. Ergo he was planning to walk into Comedy Central and confront producers, [because they] weren’t responding online.’

Avi Yemini wasn’t wrong in showing concern for Greta. Nor was he wrong in his criticism of her handlers.

It’s important to note that Greta isn’t on trial, neither is science. What is on trial is the misuse and manipulation of science for political and financial gain, via a bandwagon fallacy. Apocalyptic climate change does violence to the scientific method because it silences questions. It is a narrative built on fear and groupthink.

Greta’s speech shows us that kids are under immense psychological and emotional pressure to process what they’re being sold. All of which is generated by apocalyptic climate change extremists. That is why I disagreed with Tim Costello when he supported the climate strike calling it a Christian duty. Kids are being over-burdened with fears of the world ending. All based on a hypothesis, turned-vicious-dogma. Apocalyptic climate change is politics veiled as science. It’s immoral and unchristian to stand by and applaud such manipulation. It is child abuse.

Greta’s speech today proved that her handlers are the ones betraying her. Not Avi Yemini. Not the majority who join him in questioning the narrative of fear used to push apocalyptic climate change, and the marketing package it’s encased in.