The ABC have shared a disturbing video documenting in a positive light the final hour leading up to David Goodall’s suicide. The 104-year-old was one of 15 Australians who traveled to Switzerland to end their lives in the past seven years.

The video shows Goodall’s grandson asking Goodall a series of mandatory questions leading up to his death. The questions are designed to ensure he understands the nature of his decision. Goodall admits he doesn’t have an incurable illness, he’s not in unbearable pain, he doesn’t suffer from depression, and he’s not being influenced by family.

Goodall is then handed a slider clamp for an intravenous drip and told to slide the wheel upwards to release the chemical that would end his life. After the camera crew is asked to leave the room, Goodall died.

“He really wanted these laws to change,” he added. “He felt very strongly that these laws were not just. He’s suffered. He has been wanting to do this for a long time. And not only was he getting his wish but he was also achieving the goal that he set out to in the first place which was to publicise this issue to make sure that other people follow behind him will get this opportunity without having to suffer the way that he did.”

Perhaps the most absurd aspect of the whole thing is that ABC News lists four suicide prevention hotlines in the comments. 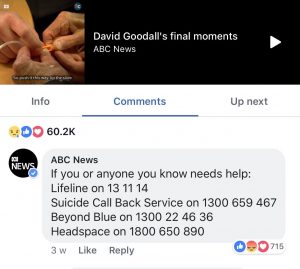 But should we really be telling the most vulnerable in society, those who suffer severe depression, crippling anxiety, or chronic illness that suicide is a viable option, at least sometimes? This would have disastrous effects, especially considering the undeniable link between suicide and both mental and physical health.

The ABC seemingly knows euthanasia can’t be preached without falsely portraying suicide as a solution. After all, it was apparently the solution for David Goodall, and isn’t that what “good death” implies anyway?