Students at a New South Wales public high school have been encouraged to wear LGBTQ themed clothing to show support for the International Day Against Homophobia and Transphobia.

Greystanes High School, who is today hosting the “Rainbow Mufti Day”, told students that participants will be expected to hand over a $1 donation.

However, any student in mufti who fails to wear an item of rainbow clothing will be required to pay twice as much as those donning LGBTQ colours.

A letter allegedly sent to students and parents warns, students who wear mufti without rainbow representation will be “chased up until they pay up.”

The letter goes on to say, the SRC will also be selling fairy bread, rainbow Lollipops, and rainbow lollies. All proceeds will be donated to charity. 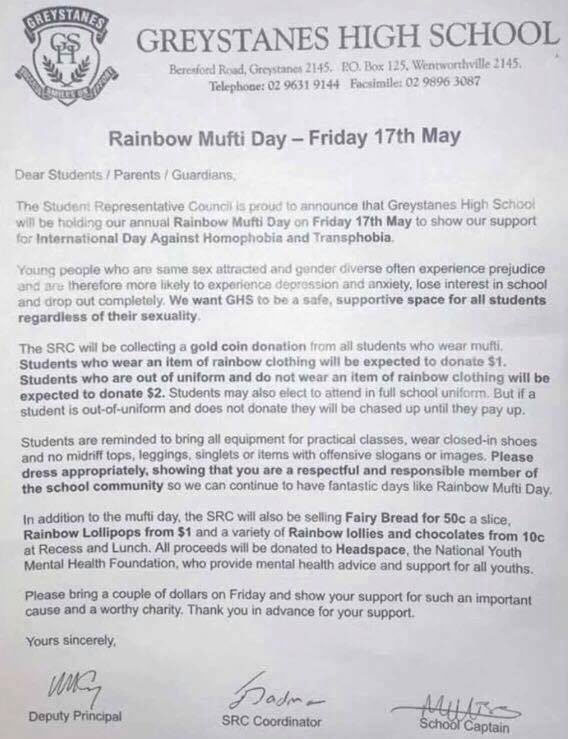 No student should be subject to abuse. Yes, schools have a responsibility to ensure their pupils are safe. But what does a day like this actually achieve, apart from marking and isolating another group of students who may not necessarily subscribe to the LGBTQ ideology?

What sort of reaction would you expect if a government school encouraged students to wear a cross and donate to the persecuted church, taking twice as much from those who refuse to wear Christian symbols? No doubt, whoever made that decision today wouldn’t have a job tomorrow.

Update: Greystanes High School issued an apology on their Facebook page, assuring parents that their children will not be pursued for payment, even though the letter warned they would be “chased up until they pay up.”

“We would like to clarify any misunderstanding from a previous letter which was distributed to parents at Greystanes High School,” the statement reads. “Please be assured that students who did not donate a gold coin will not be pursued for payment. Donations to this cause and to future fundraising causes are voluntary.”

The statement continues: “We would like to apologise if you received the impression that students ‘must pay’. We acknowledge the school has played a role in creating this impression and that the letter was poorly expressed.”