What’s on the agenda for ‘social progressives’ after the redefinition of marriage? The decriminalisation of abortion. At least, that’s what Alex Greenwich MP—former Co-chair of Australian Marriage Equality—is now focused on. And quickly. With Parliament resuming this week, Greenwich is tabling a bill to decriminalize abortion in NSW, and to require doctors with conscientious objections to refer patients to those who will perform the grisly procedure.

The Bill has the support of the Health Minister, Brad Hazzard and, Caldron Pool understands, Premier Gladys Berejiklian. However, of even greater concern than the issue itself is that the Bill will not follow the normal parliamentary processes. The most obvious of which would be to set up of a cross-party committee to investigate the issue, but that’s not going to happen. In fact, abortion enthusiasts are even looking to suspend the Legislative Assembly’s normal standing orders to ram it through the house this week.

Caldron Pool has also heard that Transport Minister and Leader of the House Andrew Constance is ringing around moderate MPs to sure up support, not only for the Bill, but for its expedited passage into law.

I find that it’s more than a little odd that a gay man would position himself as the champion for “women’s reproductive rights”. I would have thought that decriminalising commercial surrogacy laws would have been next on his agenda. But maybe this particular issue is more politically expedient right now? Or maybe it just shows the power of left-wing intersectionality, whereby you’re not a true progressive unless you support the full panoply of extreme positions.

Ultimately, however, this Bill and the way it’s dealt with by Parliament is not about procedures. The Rev. Dr. Peter Barnes, President of Evangelicals for Life and Moderator-General-Designate of the Presbyterian Church of Australia makes it clear:

Both Alex Greenwich and Health Minister Brad Hazzard seek to perpetuate the myth that abortion is about a woman’s reproductive rights and, more insidiously, health care. It is, of course, about killing unborn babies. Life is the most basic right of all, and the urgent business of Parliament should be to protect it rather than to proceed with this bill.

Barnes is correct. The right to life is the most basic human right of all. What’s more, to refer to abortion as a woman’s “reproductive right” is Orwellian precisely because it’s a myth. Because if abortion is decriminalised in NSW then it’s the rights of unborn men and women that are going to be affected most of all.

But what a lot of people don’t understand is that the Bill currently being presented by Alex Greenwich this week in the NSW Parliament not only seeks to de-criminalise abortion but extend it to include late-term abortions as well. Below is an extract of the pertinent section: 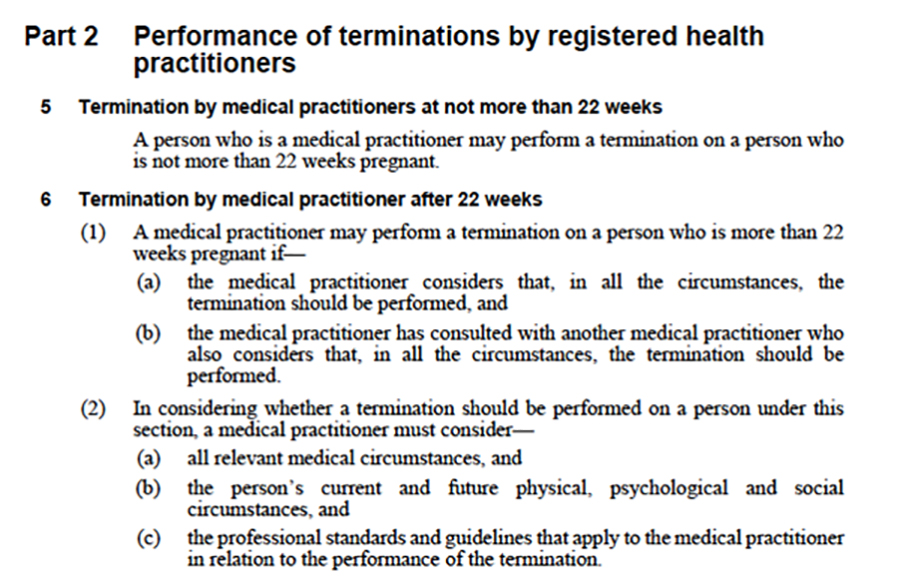 Note that all that is required is the approval of two medical practitioners. What’s more, the reason for terminating the pregnancy can simply be because it’s not in the mother’s best psychological or even social interest.

It’s inaccurate to say that this Bill will lead to a slippery slope of consequences because it is immediately bringing us as a community to the precipice. As such, both sides of parliament should rightly reject such a proposal and seek to strengthen the legal protections for those who are the most vulnerable.

The future of our nation literally depends on it.