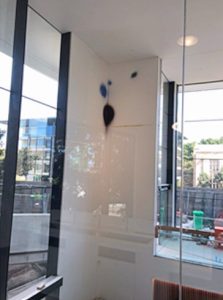 What you see here is a significant part of a $400,000 art installation at Sydney University, that prestigious centre of tertiary education which prides itself on Unlearning everything—from medicine, love, truth, and it seems like even of common sense itself.

No, those black splotches are not mold. And nor is the horizontal yellow line a urine stain. According to Sydney University, this is a $200,000 piece of art. On contacting the Media Department at Sydney University, they initially had no idea what it was either. But about a week later they came back with the following reply:

We are in the process of completing significant pieces of public art associated with the development of the new Life, Earth and Environmental Science Building (LEES1) and the F23 Administration Building, both on Eastern Avenue, Camperdown Campus. Public art is a requirement under each building’s terms of development with the NSW Department of Planning and Environment, and also aligns with the requirements of the City of Sydney Council.

While the agreement with the artist is confidential, as a guide the typical budget for a project such as this is $150,000 to $200,000 per development site or building, depending on the size and scale of the project and the reputation of the artist. As the installation is a requirement for both LEES1 and F23, the total cost is approximately $400,000.

Sadly, this is part of a much larger march of the cultural-left through societies key institutions. As Kevin Donnelly has brilliantly argued in Quadrant Online last year:

Since the cultural revolution of the late Sixties and Seventies the more conservative liberal view of education has been attacked and undermined by a rainbow alliance of cultural-left movements including: Marxism, Neo-Marxism, deconstructionism, postmodernism, feminism and post-colonial and LGBTQI theories.

Donnelly is absolutely right. Sydney University is emblematic of a much larger “decline and disgrace” that is occurring in our nation intellectually. And our tertiary institutions in particular have been taken captive by those who would seek to deconstruct Western civilisation and re-create it in their own image.