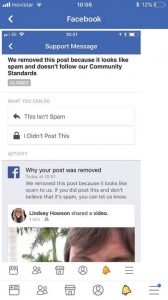 Tommy Robinson has recorded the moment he confronted a Daily Mail journalist who traveled to his family’s holiday location for a story.

“I don’t care what the media print about me,” Robinson said in a Facebook post. “The public don’t buy their fake news. I care about the invasion and harassment from the Daily Mail on my innocent family who live under threat from violence.”

The video has had more than 500,000 views, but it appears Facebook is trying to prevent people from sharing it by marking it as spam. “Facebook are removing this video from people’s timelines,” Robinson said in another Facebook post.

“Share it everywhere. The [Daily Mail] are doing the government’s work by harassing my family and now social media are trying to prevent people from seeing me asking him simple questions,” he added.