Parents magazine is encouraging folks to teach their young children that men can have periods too.

A post on the news company’s Instagram account on Wednesday shows a 4-year-old boy named Eli holding a letterboard that reads: “Some men have periods too. If I can get it so can you.”

The boy’s mother, Milly Bhaskara, shared the image to show support for Always‘ decision to remove the female Venus symbol from their Sanitary Pads packaging to be more inclusive of transgender people. 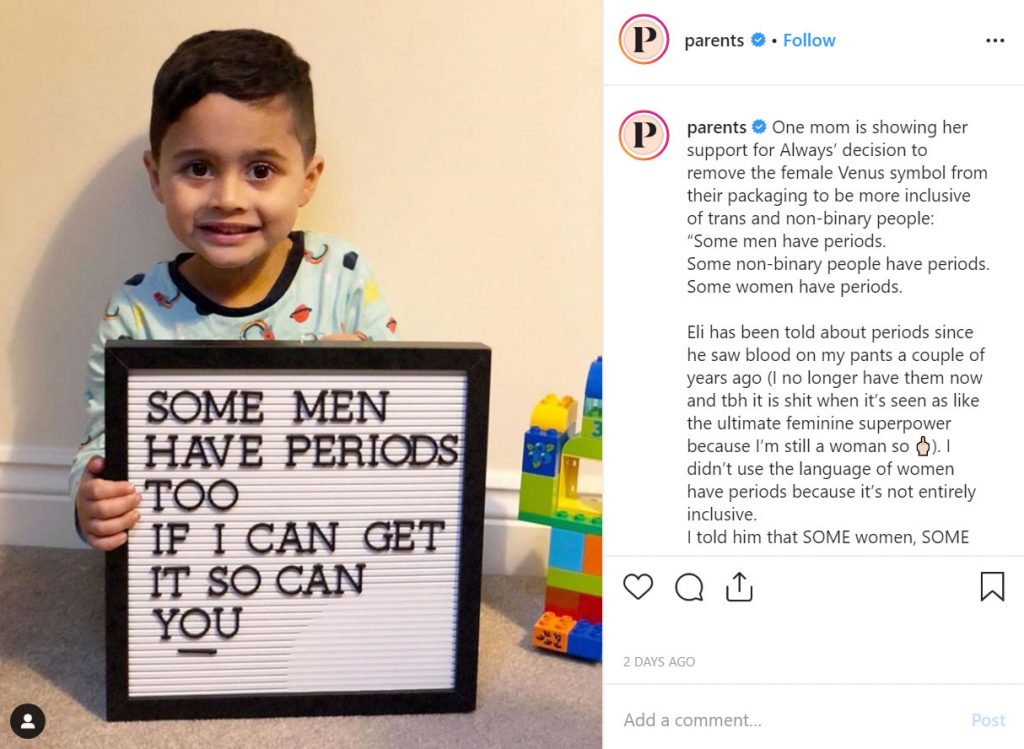 “Eli has been told about periods since he saw blood on my pants a couple of years ago,” she explained in the caption. “I didn’t use the language of women have periods because it’s not entirely inclusive.

“I told him that SOME women, SOME non-binary people and SOME men have periods. It was easy for him to accept as he hadn’t had to unlearn the ingrained societal norm but if a 4-year-old can grasp it I’m sure most of us can have a crack at unlearning transphobic/misinformed norms and open our minds,” she added.

The post has since attracted almost 4.5k comments in response, many of which are negative and express anger at the exploitation of a young child who isn’t even old enough to read or understand what the sign says.

“Omg… LEAVE KIDS OUT OF IT!!!,” one follower said in a comment which has attracted more than 3.2k likes, more likes than the original post itself. “LET THEM BE KIDS…. they don’t even teach about menstrual cycles to the 5th grade. This is a sad and pathetic attempt on the mother’s part to exploit her child and get a pat on the back. This kid is way too young to grasp the reality of what’s being talked about here. Let him be a kid. This is disgusting to exploit this child. [If] a mom wants to hold up a sign and post it on social media, then so be it.”

“Whoever made their child hold this sign needs mental help,” another follower said in a comment which attracted more than 1.3k likes.

“This is insane,” another commenter said. “This 4-year-old is going to grow up thinking he’s going to get a period. A 4-year-old shouldn’t know anything about a period. This is going to confuse him on so many levels. I feel like this might be attention-seeking.”

Despite a number of comments requesting the removal of the photo, Parents magazine have thus far decided to keep the post on their profile.